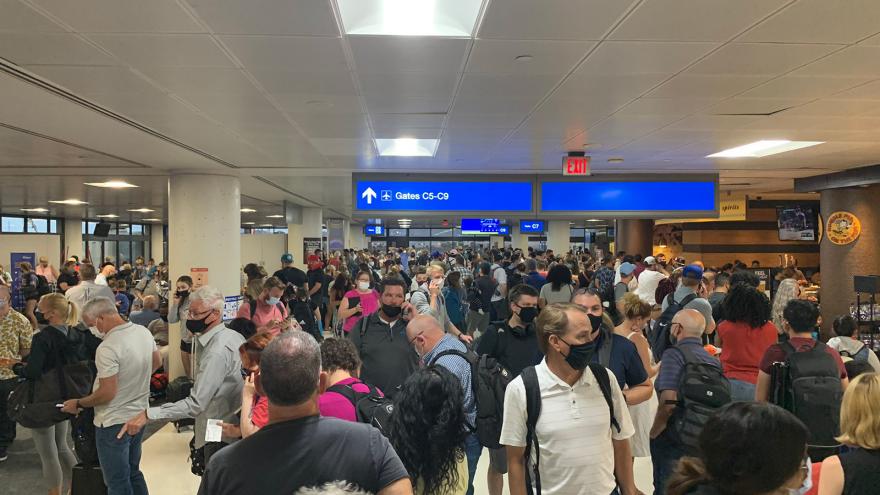 (CNN) -- Southwest Airlines said it was "resuming normal operations" and investigating the cause of technical issues that paused departing flights Tuesday afternoon.

The outage was the second technical issue in less than 24 hours, and the airline said it is "in the process of investigating the root cause of each event to determine the reason behind the technology issue."

The airline told CNN it canceled around 500 flights because of the issue. Data from the aviation tracking website FlightAware reported 966 delays and showed the cancellations and delays together affected 42% of Southwest's schedule on Tuesday.

The Federal Aviation Administration said it "issued a temporary nationwide ground stop at the request of Southwest Airlines while the company resolved a reservation computer issue."

Passengers across the country took to social media to express their frustration and demand answers after the issue left some people grounded, stranded and stuck on planes.

As the world has returned to pre-pandemic era air travel, flights have seen an uptick in issues, with the Federal Aviation Administration saying there have been 3,000 unruly passengers reported this year.

Southwest said the technical issue Monday prevented the transmission of weather information that is required to safely operate their aircraft.

"While the vendor worked to restore connectivity, we implemented a ground stop to protect the safety of our crews and customers," the statement said.

Southwest said it was working to get all passengers to their destinations as quickly as possible.

Chris Martin, who was traveling on Monday, told CNN he was delayed for over two hours on a Southwest Airlines flight from San Jose, California, to Austin, Texas.

After tweeting about the airlines outage issues and delays, he said he was able to board a flight but many others were not so lucky.

"Lining up to board now, apparently they are releasing the weather paperwork city by city. This was a 5:55pm departure, now 8:17pm out here," Martin told CNN. "Twenty-two flights showing on the board delayed or canceled."

Jason Goran, another passenger who was traveling from San Diego, California, to Houston, said he sat on the plane for two hours because of the weather system outage.

"@SouthwestAir captain said we can't take off because weather system for entire company is down?" Goran tweeted during the ordeal.

"It feels like we are about to take off," he said at the time. "They called us back to the plane but we haven't pushed back yet."

Patrick Miller said after boarding his flight from Phoenix to Portland, Oregon, passengers had to deplane and then reboard. "From boarding to deplaning, it (took) two hours," Miller told CNN.

He also tweeted about his delay, saying "Lots of hate being thrown at @SouthwestAir right now, but my flight attendants have been giving out water and people are allowed to deplane."

People were losing their patience because of the delay, he said.

Other passengers, such as Ryan Cesaitis, said they were able to take off and land, but ended up stuck on their planes as issues continued to plague the airline.

Cesaitis, who also shared his experience on Twitter, told CNN that he waited on the tarmac for 90 minutes after landing at Dallas Love Field from Phoenix.

Delta told CNN in a statement that its teams were working to quickly address a technical issue that made it difficult for customers to purchase flights on Delta.com, the Fly Delta app and through the company's Reservation Call Center.

The ability to check in for flights was not affected, according to the statement.

Alaska Airlines also experienced issues Monday. In a tweet to a customer, the airline said that its "booking page is down. Our team is working hard to get this resolved."

A message on the Alaska Airlines booking page read, "We are currently experiencing issues that affect shopping at alaskaair.com, our mobile app and through our contact center. We are actively working with our partner that powers our shopping platform to resolve the issue. We apologize for the inconvenience. Please try again later."

CNN reached out to Alaska Airlines for comment but has not yet heard back.