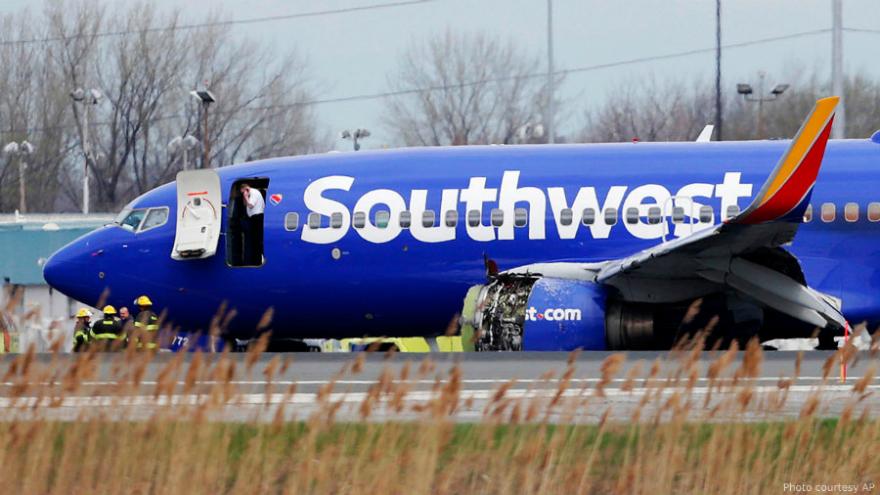 (CNN) -- A Southwest Airlines plane flying from New York to Dallas had to make an emergency landing Tuesday morning in Philadelphia after one of its engines was damaged, according to the Federal Aviation Administration.

"We left LaGuardia heading to Dallas, and we were west of Philly when we lost the left-side engine and diverted to Philly," said Kristopher Johnson, who told CNN he was sitting toward the front of Flight 1380.

"Shrapnel hit the window causing a serious injury. No other details about that. Several medical personnel on the flight tended to the injured passenger."

The flight-tracking site, Flightaware, confirms the Boeing 737 was over southeast Pennsylvania when it made a dramatic turn back to Philadelphia. One passenger was transported to the hospital, according to CNN affiliates.

The crew reported damage to one of the aircraft's engines as well as the fuselage and a window, the FAA said in a statement. Passengers used air stairs to disembark the aircraft, the statement said.

"All of the sudden we heard this loud bang, rattling," Johnson said. "Felt like one of the engines went out. Oxygen masks dropped."

The plane descended precipitously, he said, but the pilot regained control and informed passengers the flight was headed to Philadelphia.

Southwest issued a statement saying it was aware the flight was diverted to Philadelphia with 143 passengers and crew aboard and was transporting them to the terminal.

"We are in the process of gathering more information," the statement said.

Video from the scene showed the plane on the tarmac surrounded by emergency vehicles. The engine on the left wing appeared damaged.

The National Transportation Safety Board has sent a team to Philadelphia to investigate the incident. Boeing said it is providing technical assistance in the investigation.