SpaceX will launch four space tourists on a three-day trip in space. Here's everything you need to know 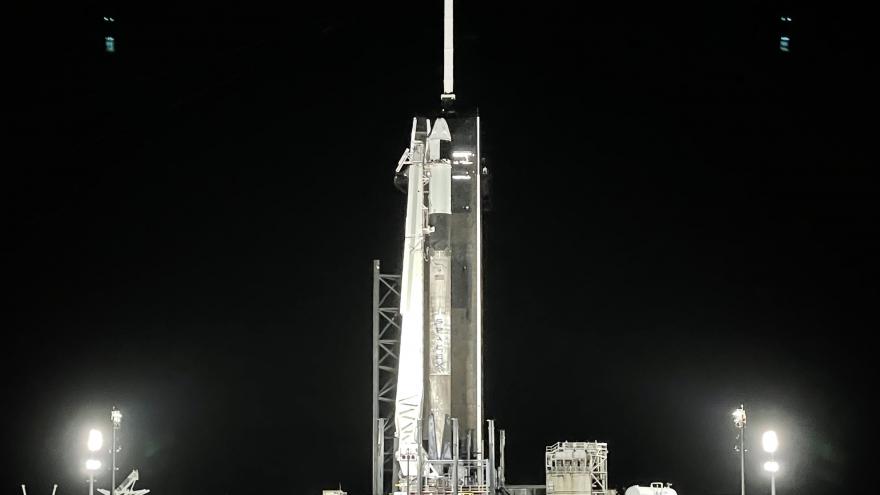 Four tourists are set to launch into space for a three-day trip. The 200-foot-tall SpaceX rocket will blast them past the speed of sound and up to 17,500 miles per hour. Photo Credit: CNN/Devon Sayers
By Jackie Wattles, CNN Business

(CNN) -- On Wednesday, four people — none of whom are professional astronauts — will strap themselves into a capsule atop a 200-foot-tall SpaceX rocket that will blast them past the speed of sound and up to 17,500 miles per hour.

This mission, dubbed Inspiration4, is the first orbital mission in the history of spaceflight to be staffed entirely by tourists or otherwise non-astronauts.

Launch is slated for Wednesday between 8:02 pm and 1:02 am ET from NASA's Kennedy Space Center in Brevard County, Florida, though forecasters are keeping a close eye out for storms that could impact the mission.

The three-day journey will see the quartet free-flying through Earth's orbit, whipping around the planet once every 90 minutes while the passengers float, buoyed by microgravity, and take in panoramic views of our home planet. To cap off the journey, their spacecraft will dive back into the atmosphere for a fiery re-entry and splash down off the coast of Florida. And yes, for all three days in space, the passengers will all have to share a special zero-gravity-friendly toilet located near the top of the capsule. No showering will be available, and crew will all have to sleep in the same reclining seats they will ride in during launch.

This is far from the first time civilians have traveled to space. Though NASA has been averse to signing up non-astronauts for routine missions after the death of Christa McAuliffe, a New Hampshire school teacher who was killed in the Challenger disaster in 1986, a cohort of wealthy thrill-seekers paid their own way to the International Space Station in the 2000s through a company called Space Adventures. American investment management billionaire Dennis Tito became the first to self-fund a trip in 2001 with his eight-day stay on the International Space Station, and six others came after him. They all booked rides alongside professional astronauts on Russian Soyuz spacecraft.

This mission, however, has been billed as the beginning of a new era of space travel in which average people, rather than government-selected astronauts and the occasional deep-pocketed adventurer, carry the mantle of space exploration.

But to be clear, we are still a long way from that reality, and this trip is still far from "average." It's a custom, one-off mission financed by a billionaire founder of a payment processing company, and though pricing details have not been made public, it likely cost upward of $200 million. (According to one government report, SpaceX's Crew Dragon capsule costs roughly $55 million per seat.)

Here's a rundown of what's happening and why it matters.

The passengers: A billionaire, a cancer survivor, a geologist and a raffle winner

Isaacman — who will become the third billionaire to self-fund a trip to space in the past three months and the first to buy a trip to orbit on a SpaceX capsule — is billing this mission as one that he hopes will inspire would-be space adventureres, hence the missions's name, Inspiration4. He's also using it as the centerpiece for a $200 million fundraiser for St. Jude Children's Hospital, $100 million of which he donated personally and the rest he is hoping to raise through online donations and an upcoming auction.

How did all this happen?

Inspiration4 is entirely the brain child of Jared Isaacman and SpaceX.

Isaacman began flying single-engine prop planes recreationally in the mid-2000s and developed an insatiable thirst for going higher and faster, eventually moving into twin-engine planes, then jets, then military-grade aircraft that can zip past the speed of sound.

Each of Isaacman's fellow passengers was selected in a different way: He asked St. Jude to select a cancer-survivor-turned-healthcare-provider, and the organization chose Arceneaux. Proctor won an online contest specifically for people who use Shift4, the payment platform Isaacman runs. And Sembroski was given his seat by a person who won a raffle for people who donated to St. Jude. (Sembroski also entered the raffle but was not the original winner.)

Isaacman told CNN Business that he sat down with SpaceX to hash out the flight profile. He specifically wanted the Crew Dragon to orbit higher than International Space Station, which is why the spacecraft will orbit about 350 miles above Earth — roughly 100 miles above where the space station orbits.

How risky is this?

Any time a spacecraft leaves Earth there are risks, and there are no perfect measurements for predicting them.

But NASA estimates Crew Dragon has a 1 in 270 chance of catastrophic failure, based on one metric the space agency uses. For comparison, NASA's Space Shuttle missions in the 1980s to early 2000s ultimately logged a failure rate of about 1 in every 68 missions.

Because of the inherent risks of blasting a spacecraft more than 17,500 miles per hour — the speed that allows an object to enter Earth's orbit — Inspiration4 is more dangerous than the brief, up-and-down suborbital jaunts made by billionaires Jeff Bezos and Richard Branson.

Apart from the many perils of the launch itself — in which rockets essentially use controlled explosions more powerful than most wartime bombs to drum up enough speed to rip away from gravity — there's also the re-entry process. When returning from orbit, the Crew Dragon's external temperatures can reach up to 3,500 degrees Fahrenheit, and astronauts can experience 4.5 Gs of force pushing them into their seats, all while the ever-thickening atmosphere whips around the capsule.

During a Netflix documentary about the Inspiration4 mission, Musk described a capsule going through reentry as "like a blazing meteor coming in."

"And so it's hard not to get vaporized," he added.

After that the Crew Dragon then has to deploy parachutes to slow its descent and make a safe splashdown in the ocean before rescue ships can whisk the four passengers back to dry land.

Despite the risks, a former NASA chief and career safety officials have said the Crew Dragon is likely the safest crewed vehicle ever flown.

All four passengers will spend the entire missions aboard a SpaceX Crew Dragon capsule, a 13-foot-wide, gumdrop-shaped spacecraft that detaches from SpaceX's Falcon 9 rocket after reaching orbital speeds.

The SpaceX Crew Dragon capsule was developed by Elon Musk's rocketry company for the specific purpose of ferrying NASA astronauts to and from the International Space Station, which it did for the first time ever in May 2020.

Since then, SpaceX has launched two additional Crew Dragon missions for NASA.

SpaceX is allowed, however, to sell seats — or entire missions — to whoever the company chooses. Although NASA paid for much of the Crew Dragon's development, under the terms of the deal between the federal agency and the company, SpaceX still technically owns and operates the vehicle and can use it for whatever commercial purposes it wishes.

Crew Dragon's missions in the near future also include a mix of NASA-commissioned flights to the ISS and space tourism missions.

For this mission, the Crew Dragon will be retrofitted with a giant glass dome at the tip of the spacecraft specifically for the crew to soak in panoramic views of the cosmos.