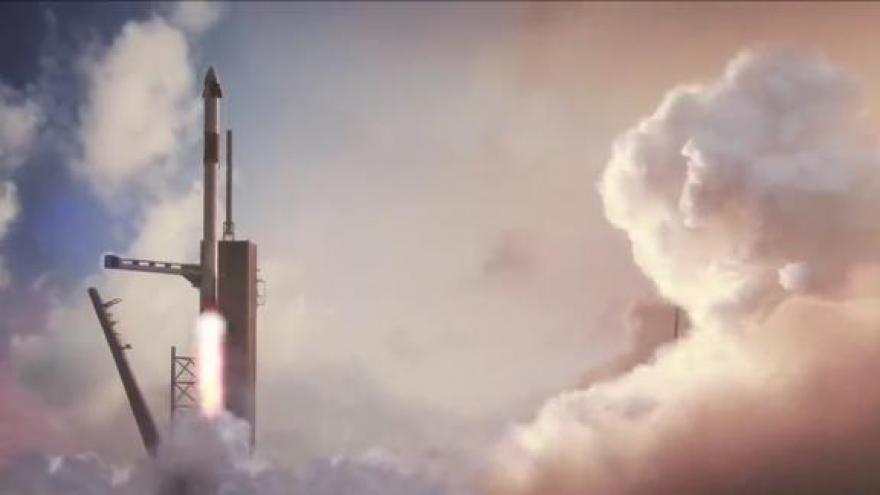 (CNN) -- After months of anticipation, SpaceX's new crew-worthy spacecraft, Crew Dragon, is finally prepped for its last major test before astronauts can begin using it for rides to the International Space Station.

But finding the right weather conditions could be a roadblock this weekend.

On Saturday morning, SpaceX delayed a planned launch of its "in-flight abort test", which will demonstrate how Crew Dragon would intentionally eject itself from a malfunctioning rocket on the way to space. But rough waves in the Atlantic Ocean — where Crew Dragon is expected to land after the test flight — prompted SpaceX to delay the test another day.

The company is now aiming to launch Sunday between 8 am and 2 pm ET at Florida's Kennedy Space Center.

SpaceX has worked for years to prepare for this test. It's expected to be the last major milestone in Crew Dragon's development program before the spacecraft is deemed ready to begin sending astronauts to space.

The in-flight abort test will see Crew Dragon launch — without humans on board — atop one of SpaceX's Falcon 9 rockets. About 84 second into launch, the rocket's engines will suddenly stop firing, simulating an emergency situation. Crew Dragon will simultaneously fire up its own engines to thrust itself away from the Falcon 9, and parachutes will slow the spacecraft's descent before it makes a splash landing in the ocean and is recovered by rescue ships.

Bad weather usually delays rocket launches only if it impacts the rocket's path. But, in this case, SpaceX and NASA also want to make sure Crew Dragon doesn't encounter unfavorable conditions after it is jettisoned from the rocket.

That means weather officials will be scanning for issues in a much bigger area, and so far things haven't lined up.

Conditions in the rocket's flight path looked great on Saturday, but "sustained winds and rough seas in the recovery area" prompted SpaceX to keep Crew Dragon grounded until its next launch opportunity on Sunday, according to a tweet from the company.

SpaceX may encounter the opposite problem on Sunday. Thick clouds are expected to move over Kennedy Space Center, potentially impacting the rocket's flight path, while conditions at sea will calm down, according to Mike McAleenan, a launch weather officer who briefed reporters Friday.

SpaceX has another window of opportunity for this test mission on Monday morning.

NASA asked the private sector to develop crew-worthy spacecraft to replace the Space Shuttle program after it was retired in 2011. SpaceX was allotted $2.6 billion and Boeing was awarded $4.2 billion in 2014, and the space agencies initially predicted their vehicles would be ready to fly astronauts by 2017. But development of both spacecrafts took years longer than expected. Meanwhile, NASA has paid Russia billions of dollars for its astronauts to ride aboard the country's Soyuz capsules.

Boeing suffered a significant setback when its Starliner spacecraft malfunctioned during an orbital test flight in December, and it's not clear when the vehicle will be ready for crewed missions.

But if all goes well for Crew Dragon's in-flight abort test, the spacecraft could be cleared to fly astronauts in the coming weeks or months. It could mark NASA's first human spaceflight mission in nearly a decade, and it'll be the first-ever crewed mission for SpaceX in its 18-year history.

Two NASA astronauts were selected to be Crew Dragon's first passengers: Bob Behnken and Doug Hurley, both of whom are former military test pilots and veterans of space shuttle missions.

Even though the company would never anticipate an emergency abort would be necessary, SpaceX "would want to understand where [astronauts] might land" in such an scenario "and we'd look at that weather as well," Reed said. "The number one most important thing is that we launch safely."