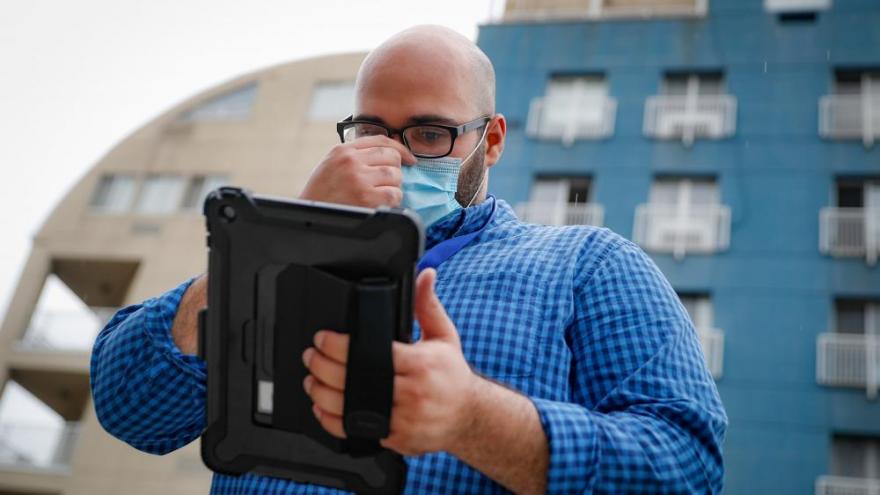 Joseph Ortiz, a contact tracer in New York City, gathers information as he heads to a potential patient's home.

(CNN) -- Nine months into a pandemic that has killed 210,000 people in the United States, health officials are imploring residents to answer their phones. The caller may be a disease tracker trying to save you from the deadly coronavirus.

Contact tracing involves identifying sick people, isolating them and then tracing everyone with whom they've been in contact and putting those people into quarantine.

But many people wary of spam calls and phishing scams are not answering calls from unknown numbers, undermining efforts by contact tracers to reach people exposed to Covid-19. And some states such as Louisiana are sending letters to those people who don't answer -- not the most effective way when time is of the essence.

Without a federal contact tracing program, health departments have set up a patchwork of procedures. Some have worked with phone companies to ensure the name of the health department shows up on caller ID. For example, in Washington, DC, it shows up as DC Covid 19 Team.

Still, others appear as unknown numbers and are getting mistaken for spam calls. And even when they show up with the specific departments, some are still going unanswered.

"Hello? Yes, it's you we're looking for," Mayor Muriel Bowser tweeted, echoing the Lionel Richie song. "Contact tracing is a critical tool in getting our city back on its feet. Answer the call."

The governor of Ohio is voicing the same message. State health officials say while they have 113 health jurisdictions and don't collect the percentage of calls answered on a state level, local jurisdictions have reported less cooperation with tracers now than they did earlier in the pandemic.

"If you receive a call from a contact tracer -- answer the call," Gov. Mike DeWine said. "Contact tracing is incredibly important as we work to stop the spread of Covid 19."

Robocalls have made things more complicated

In the age of identity theft, many Americans are rightly suspicious about sharing their personal information with strangers. And robocalls have not made things easier.

The number of robocalls received in the United States dipped in the early months of the pandemic, then ticked back up as call centers reopened.

In September alone, there were 3.8 billion robocalls recorded nationwide by tracking service YouMail. That's about 127 million per day and an average 12 calls per person. With the desperate wait for coronavirus treatments and vaccines, scammers preying on pandemic fears are using such calls to offer bogus testing or seek personal information.

That has made people even more reluctant to share personal details by phone. For example, 45% of New Jersey residents with coronavirus reached by contact tracers refused to provide information for various reasons.

"This is about public health. No one is on a witch hunt here. We don't condone underage drinking, illegal behavior, but that is not what this is about," Gov. Phil Murphy said in July after a cluster of coronavirus cases was traced to a teens' house party. "No one has any questions other than have to do with stopping the spread of the virus."

Even when people answer, responses are spotty

Contact tracing largely relies on the public to voluntarily provide information. But when people do answer their calls, they are not always forthcoming, even though their identity and information is confidential and won't be shared with their contacts.

In Louisiana, where incoming calls from contact tracers say LA Health Dept, health officials have reached 66% of residents who tested positive since May. Another key challenge is getting details from people with whom they've been in contact, said Sean Ellis, a spokesman for the Louisiana Department of Health. Others have been displaced after Hurricane Laura, adding another layer of challenge.

Georgia also is facing challenges in reaching out to potential patients, partly because calls to cell phones only show a number. On some landlines, the Caller ID displays GDPH -- Georgia Department of Public Health. About 60% of contact tracing calls are being answered in the state's northwest health district, said Logan Boss, a spokesman for the Georgia Department of Public Health.

In Boss' district, health officials are sending text messages beforehand and if they can't reach people, they follow up with a call. If they still don't get a response, they send an email asking someone to reach out to them.

Some people are not calling back while others are withholding information on close contacts or employers, Boss said.

"We find that some people are reluctant to answer questions because they think it's a scam or because they don't want to be identified as a case or a contact, or provide information about other contacts, so they won't have to quarantine for 14 days," said Kelli Newman, a spokeswoman at Columbus Public Health.

Ohio's Cuyahoga County is getting 90-95% of its calls from contact tracers answered, said Kevin Brennan, a spokesman for the board of health. The number on the caller ID shows as being from the Ohio Department of Health.

If people don't answer, they get a text message in addition to a voice mail that identifies the caller as from the board of health. If an attempt to call three times is not successful, a letter is hand-delivered.

"We are finding, as time goes on, that people are reluctant to give us their contacts. If people question where we are calling from, we direct them to our website so that they can verify our employment," Brennan said.

While there's no federal contact tracing framework or app, the Centers for Disease Control and Prevention provides guidance and support to help local governments. It's up to each state local governments to decide what works best, the CDC says.

There's no federal contact tracing program, even though coronavirus cases are rising again in many states. So local health departments, already strained during the pandemic, have stepped in to track and limit the spread of the virus.

The more successful programs are reaching 80% to 90% of the people they contact -- and the faster they reach them, the better. At Waters' organization, most of the tracing is done over the phone. But if his callers reach someone who is uncomfortable discussing their information on the phone, personal visits can be arranged.

Successful programs have strong messaging in the hardest-hit areas to increase awareness about contact tracing so people will answer their phones, Waters said.

"Until the arrival of a widely available therapeutic or vaccine, testing and contact tracing are the best tools we have to fight the spread of Covid-19," Waters said. "I know there's a lot of fatigue right now with Covid measures but contact tracing is an important targeted way that the public can use to help protect people in their communities and the people closest to them."

In Columbus, health officials are running a multimedia contact tracing campaign to educate people about their efforts, Newman said.

To gain the upper hand against an unrelenting virus, health officials will need all the help from the public they can get.