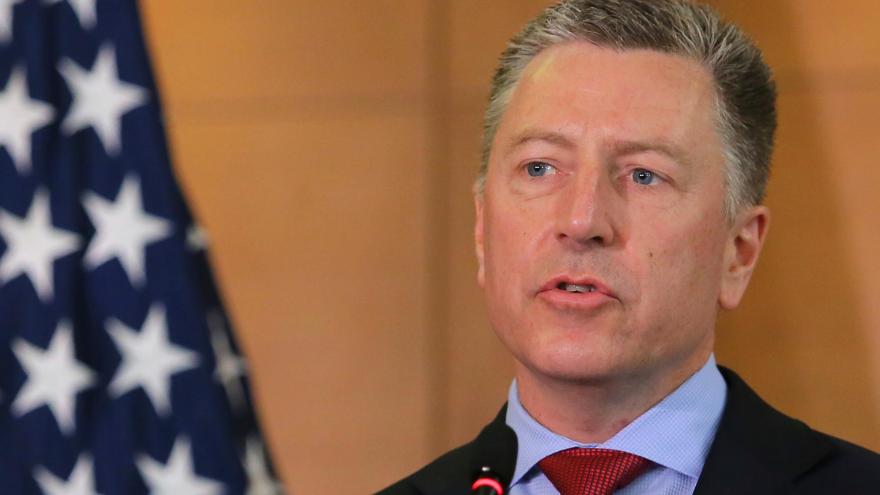 (CNN) -- Kurt Volker, US special envoy to Ukraine, has resigned one day after the release of a whistleblower report alleging a coverup by the White House of a call between President Donald Trump and Ukraine's President, three sources familiar with the matter confirmed to CNN.

Volker was named in the report. The State Department has not returned messages seeking comment.

Volker has become a key player in the unfolding scandal surrounding the whistleblower complaint concerning Trump's July 25 phone call with Ukrainian President Volodymyr Zelensky, in which Trump pressured Ukraine to investigate former Vice President Joe Biden and his son, Hunter. CNN previously reported that Zelensky had joked with Volker about Rudy Giuliani, Trump's personal attorney who is also a key player in the scandal, before the phone call was made.

Volker later set up a meeting between Giuliani, who had been interested in getting Ukraine to investigate Joe and Hunter Biden, and a Zelensky adviser in an effort to get the Biden matter out of official talks.

The news of Volker's resignation comes just hours after the House Foreign Affairs Committee announced they would hold a deposition for him next week.

"We still expect to hear everything he knows about this scandal," said a congressional aide familiar with the deposition plans. But it's unclear if he will still speak with the committee on the planned date.

Giuliani denied to CNN on Thursday the characterizations of his interactions with Volker detailed in a complaint from an American intelligence community whistleblower, saying he had a "nice little trail" of text messages with Volker to prove his story.

"I spoke to the State Department during the course of this situation, I told you, at least 10 times, and I met with them," Giuliani told CNN.

Giuliani said Volker informed him that the phone call between Trump and Zelensky went well. He also said that days earlier, around July 19, Volker first contacted him about connecting Giuliani with one of Zelensky's top advisers, Andriy Yermak.

Giuliani shared with CNN what he claimed was a text message from Volker on July 19.

"Mr Mayor — really enjoyed breakfast this morning," read the message shared with CNN. "As discussed, connecting you here with Andrey Yermak, who is very close to President Zelensky. I suggest we schedule a call together on Monday — maybe 10am or 11am Washington time? Kurt."

A State Department spokesperson said in an August statement that Volker put Yermak in contact with Giuliani.

As recently as this week, Volker was in New York for the United Nations General Assembly and he had a "packed schedule" of meetings throughout, according to a source familiar. Meanwhile, Giuliani, Trump's personal attorney who is also a key player in the scandal, was on TV waving his phone showing off what he said were text messages between the two.

"Volker wanted to keep his head down but he no longer could, it became impossible to do his job," said a source close to him.

Volker was appointed by Rex Tillerson, the former secretary of state, and was close with Tillerson as he briefed the new diplomat for his confirmation hearing.

Volker got along with Secretary of State Mike Pompeo but he remained very much associated with the late Arizona Sen. John McCain, "which is not a winning character trait for Trump" explained another source close to Volker. He never became an insider in the Trump administration, but due to his contacts with Giuliani he had an increasingly complicated role.