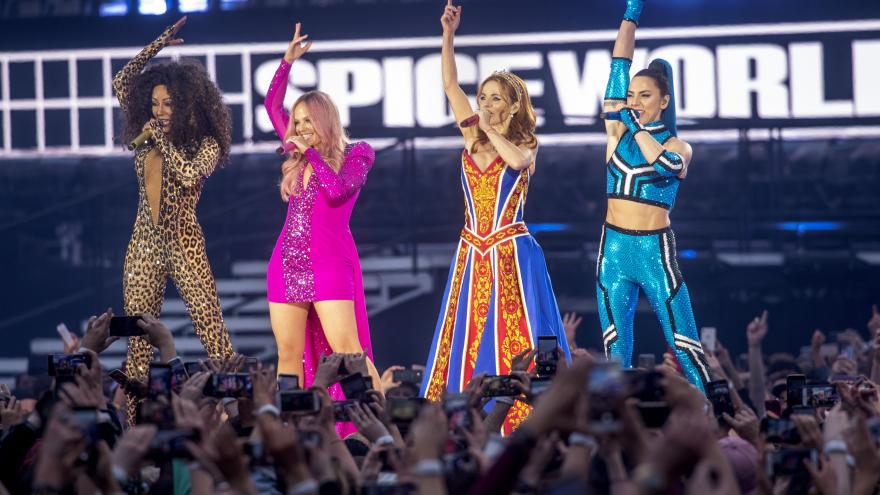 (CNN) -- The Spice Girls have hinted that their sellout reunion tour will travel to Australia early next year, after Mel B made a surprise announcement during the group's final performance at London's Wembley Stadium Saturday evening.

"We'll see you in February in Australia," Mel B told the crowd. Details of live dates in Australia -- which would be the first time the group has performed in the country -- are yet to be officially announced.

Geri Horner, aka Ginger Spice, also surprised the crowd Saturday by apologizing for quitting the group in 1998.

"I need to say something I should have said a long time ago," she told the 70,000 fans at Wembley.

"I'm sorry. I'm sorry I left. I was just being a brat. It is so good to be back with the girls that I love."

Horner left the group after reportedly suffering from health issues, two years before the whole band went on an indefinite hiatus.

Her emotional announcement came at the end of the Spice Girls' 13-date reunion tour, which also took the group to Dublin, Ireland; Cardiff, Wales; Edinburgh, Scotland; and the English cities of Manchester, Coventry, Sunderland and Bristol.

Horner also shared a heartfelt video of herself standing inside the empty stadium following the final show. "This is it. They are taking it down. It's been amazing," she said, while shrugging her shoulders.

She posted another video thanking her bandmates and everyone who attended the concerts. "Thirteen stadiums. Almost 70,000 people, with three amazing women I've shared that stage with," she said.

"I want to say thank you to Melanie, Melanie and Emma and everybody who showed up for us," Horner said, referring to Melanie Brown (Mel B), Melanie Chisholm and Emma Bunton.

"It has been something that I will never, ever forget. Thank you so much. Big love from Spice World."

"Last time I saw the Spice Girls at Wembley was 21 years ago," Adele wrote on Instagram. "Tonight with my nearest and dearest i cried, laughed, screamed, danced, reminisced and fell back in love with my 10 year old self.

"It's no secret how much I love them, how much they inspired me to run for my life and never look back. I finally got to meet Ginger. I got drunk with the girls and quite frankly I can't believe how far I've come."

The Spice Girls launched their reunion tour in May in Dublin, and they performed as a four-piece because Victoria Beckham, aka Posh Spice, declined to take part.