Spicing up a decal 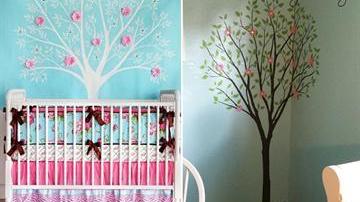 This isn't technically a tutorial on how to do this but it's a project that I did for pretty cheap!

I found another inspiration picture on the "Project Nursery" site and wanted to do something like it. I looked for decals on-line and finally decided on this one from eBay, because I had some eBay bucks to cash in and got around $10 off.  The total cost of the decal was about $22, which is more than I wanted to spend but some of the other stuff I did was cheaper than I thought so it evened out.

The decal came in the mail a few days later and I put it on the wall!

I went to Hobby Lobby again, my favorite store during their 50% off sales I refuse to pay full-price for anything there! and bought some flowers for around $3 and rhinestones for around $2 I also bought some more 3M Velcro to adhere everything to the decal with out messing up the paint.

For around $8 I turned the tree into this;

I later added some of the same butterflies that I used in the previous project just to add a little more to it!