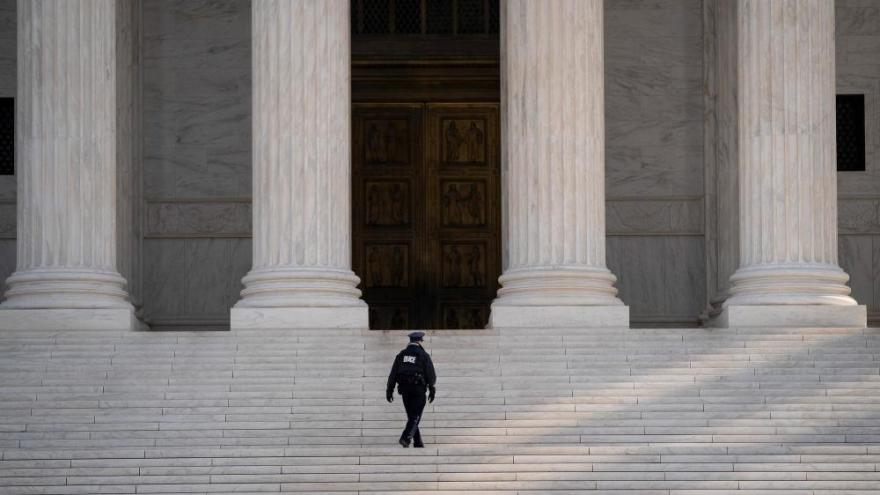 A Supreme Court Police officer walks up the steps at the U.S. Supreme Court on March 16, 2020 in Washington, DC. The Supreme Court announced that it would postpone oral arguments for its March session because of the coronavirus outbreak.

(CNN) -- The Supreme Court has yet to announce alternatives for regular oral arguments in pending cases, even as President Donald Trump has declared the national distancing guidelines should continue through April.

The justices issued an order on Monday in an April case, as if the month's schedule had not changed amid the death and turmoil of Covid-19. The Court allocated the argument time among various parties in a still-slated April 21 dispute from Oklahoma.

That ambiguous order and lack of public notice about how the nine justices may modify their practices for spring cases has only added to the swirl of uncertainty in difficult times. The reluctance to offer alternatives -- or provide clarity about possible postponements -- reinforces the secrecy around what is already one of the most insular and mysterious institutions of government.

Earlier in March as social distancing measures began and government offices closed, the justices indefinitely postponed a slate of 11 cases that were to be heard this month. But the justices offered no suggestion of how those March disputes would eventually be aired or resolved. And now, nine April cases, scheduled to begin on the 20th of the month and run for two weeks, are similarly in limbo. Oral arguments are important to the justices' consideration of disputes, but, as demonstrated by a handful of actions each term, not crucial to decisions.

With no word from the Court, lawyers have continued to prepare filings and be ready for arguments. But they are at sea about what to expect. Lower federal courts, in contrast, have instituted alternative practices and continued their oral arguments through teleconferences.

The Supreme Court does not allow live-streaming and declines to provide same-day audio of its cases. Many of the nine justices revel in their low-tech, old-fashioned ways. But in today's anxious atmosphere, those patterns, and reluctance to step up communications, deepens the uncertainty.

They let lawyers tackle questions about their cases and give the justices themselves an opportunity to telegraph their views and begin persuading each other.

The hourlong sessions also offer spectators a window into the Court's ways. Oral arguments constitute the only time all nine justices are seen together, in open court, as they struggle with an important legal dilemma.

When the Court last heard cases in early March, for example, the justices signaled their views on abortion rights and on a federal regulatory setup for consumer financial protection.

But while oral arguments help clarify issues and offer some transparency, they are not essential to the resolution of cases. Lawyers file written briefs with their cases, and the justices decide some disputes based only on such filings, including questions of life and death for condemned prisoners facing execution.

Dozens of disputes for the 2019-2020 term already had been aired in oral arguments that began last October, and the justices are working on those decisions.

Among the cases heard late last year and still awaiting resolution are those testing whether federal law protects LGBTQ workers from discrimination, whether New York gun regulations violate the Second Amendment, and whether the Trump administration's plan to deport certain undocumented immigrants who came to the US as children can proceed.

The justices are now working from home and conducting their internal meetings by telephone. Decisions are being issued online, rather than in the courtroom, as is customary. The new process has not been without glitches. The decision scheduled to be posted Monday morning was delayed.

But what of the remaining 20 cases that were scheduled to be heard this spring?

All have been pending for months, if not years, in the usual federal appellate process and could possibly be delayed only a few months, if heard in the summer or early fall. Among the disputes that were on the calendar for this month are those involving House of Representatives and Manhattan district attorney efforts to obtain Trump's financial records for ongoing investigations. Those cases were to be heard Tuesday.

The justices are still scheduled, on April 28, to hear a dispute relevant to the upcoming presidential election, testing whether states may fine or remove Electoral College delegates who refuse to cast their ballots for candidates to whom they were pledged.

Window on the court

Oral arguments are the formal start of the give-and-take as the justices consider a case. They typically do not discuss the merits of a dispute until after oral arguments, in a private weekly meeting.

The sessions also offer spectators an opportunity to pick up signals from the justices on their substantive views, as well as a chance to see individual predilections, beginning with who they invited for their special reserved seats.

The justices' views emerged earlier this month in a dispute over the Consumer Financial Protection Bureau, created by Congress in 2010 to safeguard consumers in banking, mortgage and other financial transactions. The case was triggered by a debt-services firm, resisting a CFPB investigation, that claimed the bureau was unconstitutionally set up because its director could be removed by the President only "for cause."

The challengers urged the justices not only to invalidate the CFPB's structure but to throw out the entire law and reverse a major 1935 case that had made it difficult for the President to remove the directors of multiple independent agencies. That argument theoretically played to conservatives' increasing skepticism of federal regulations.

During the March 3 arguments, it appeared the five conservative justices would be ready to rule against the CFPB's independent-director structure. But some on the right signaled they were not ready to gut the agency or use the case for a sweeping rollback of federal regulatory power.

Among the guests in the justices' special reserved section for the CFPB dispute were Maureen Scalia, widow of Justice Antonin Scalia, who remains an icon of the right; her son John Scalia; and Leonard Leo, a Scalia family friend and leader at the conservative Federalist Society.

The next day, March 4, when the justices took up a challenge to a tough Louisiana abortion regulation on physicians who perform the procedure, among the spectators in the justices' prime reserved seats were Jane Roberts, wife of the chief justice; Joanna Breyer, wife of Justice Stephen Breyer; and Ashley Kavanaugh, wife of newest Justice Brett Kavanaugh. (Jane Roberts had formerly served as volunteer legal counsel at Feminists for Life of America, an anti-abortion group, before her husband joined the Court.)

In dispute is a requirement that physicians obtain "admitting privileges" from a hospital within 30 miles of clinics. In a 2016 case out of Texas, the majority found that the regulation reduced the number of physicians available to perform abortions and offered virtually no health benefits for women.

Roberts, holding the key vote in many cases since the 2018 retirement of Justice Anthony Kennedy, had been a vigorous questioner in the Texas case but was more guarded in this month's dispute. (The chief justice has never voted to strike down an abortion regulation, and he dissented when the majority invalidated the Texas regulation in 2016.)

But it was difficult to predict how he would cast his vote in the Louisiana matter based on his limited queries. He raised a line of inquiry that could differentiate the Louisiana law from the Texas regulation.

Kavanaugh -- the successor to Kennedy, who was formerly the deciding vote for abortion rights -- similarly focused on possible state-by-state differences, specifically if physicians in some places would be able to readily obtain so-called admitting privileges.

Kavanaugh suggested he doubted such laws would always lack valid grounds and be "unconstitutional in any state, regardless of the facts."

How he and Roberts vote will likely be seen by the end of June when the justices -- at least by their usual practice -- finish handing down all their decisions for the term.