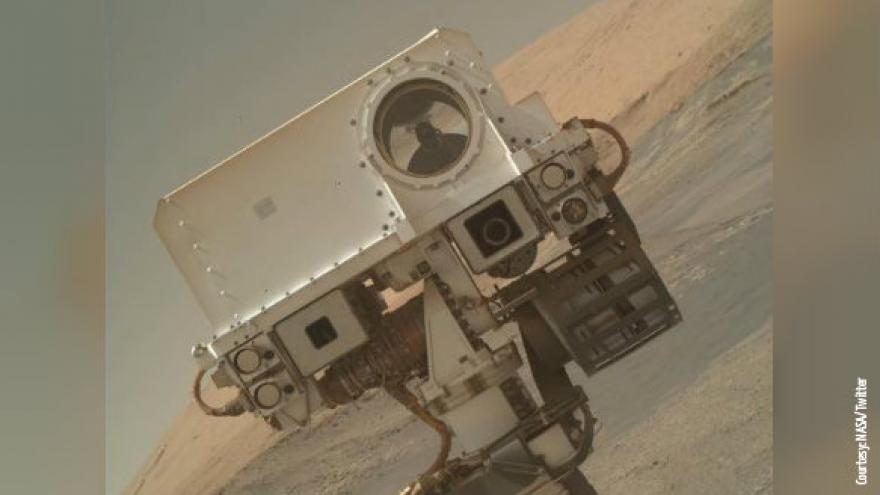 (CNN) -- NASA's popular Mars Curiosity Rover has sent back a new selfie from the red planet. The image shows the rover's "head" peaking above the dusty martian surface.

"I'm back! Did you miss me?" the rover (well, actually its social media team) tweeted.

The selfie was in the first batch of images the spacecraft sent back to its mission team after the government shutdown.

Curiosity landed on Mars on August 6, 2012 at Gale Crater after surviving the much-publicized "seven minutes of terror" descent to the surface. (We could try to describe it, but you really should just watch the video.)

Since Curiosity still was in great shape, NASA gave it more work extending the mission and sent Curiosity into overtime to continue drilling samples of the surface and to monitor the environment.

Curiosity may be getting some company soon. The new Mars InSight lander passed what NASA called a key test on Tuesday -- stretching out its solar panels. The panels will power the probe for at least two Earth years while it studies Mars' deep interior to help scientists understand how rocky planets evolved. (InSight's full name is Interior Exploration using Seismic Investigations, Geodesy and Heat Transport.)

The launch window for InSight opens May 5, 2018, at Vandenberg Air Force Base in California. If it goes up that day, InSight would land on November 26, 2018, NASA says.

InSight will carry with it about 2.4 million names submitted by the public. "It's a fun way for the public to feel personally invested in the mission," Bruce Banerdt, the mission's principal investigator, said in statement. "We're happy to have them along for the ride."