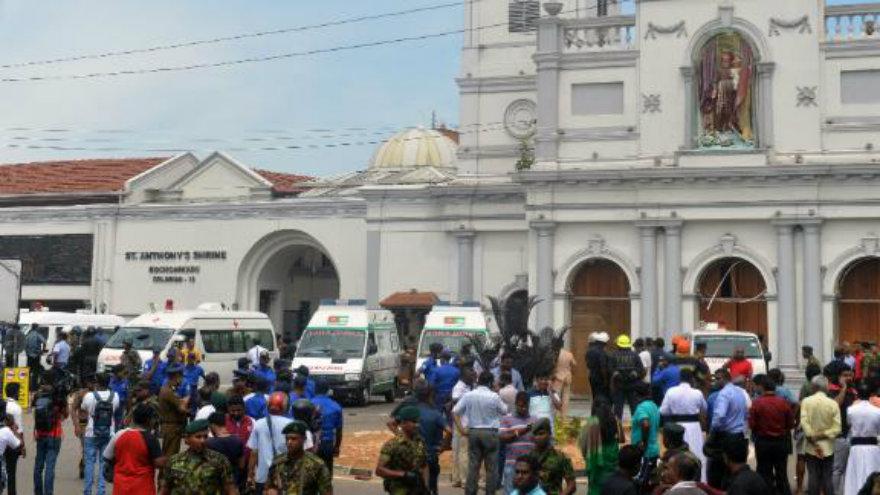 (CNN) -- Eight coordinated explosions that tore through churches and hotels in Sri Lanka on Easter Sunday have killed at least 290 people and injured another 500, in what officials have called a "brand-new type of terrorism."

Police have arrested 24 people in connection with the suicide bombs, the worst violence the South Asian island has seen since its bloody civil war ended 10 years ago.

A ninth improvised explosive device (IED) was defused near the capital's Bandaranaike International Airport on Sunday evening, according to an Air Force spokesman. The blasts appears to have targeted tourism hotspots, as well as churches, in a bid to gain maximum global attention.

Foreign nationals are among the dead, including five British citizens, two of whom held dual US-UK nationality, three Indians, two Australians, two Chinese cousins, one person from the Netherlands, two Turkish citizens and one Portuguese person.

No group has claimed responsibility for the attacks, but Sri Lankan Defense Minister Ruwan Wijewardene said the "terrorist incident" was carried out by those following "religious extremism."

On Sunday evening it was revealed in a leaked memo that police had been warned of a potential attack by the Nations Thawahid Jaman (NTJ), an Islamist group led by Mohomad Saharan. It is unclear whether the information related to Sunday's bombings.

The Prime Minister of Sri Lanka has said the intelligence was not shared with him and other ministers. Sajith Premadasa, minister of housing construction and cultural affairs, said the officers had acted with "negligence and incompetence."

Analysts, however, have cautioned against rushing to conclusions. Dhruva Jaishankar, a fellow in Foreign Policy Studies at Brookings India, said the NTJ is a little-known group, which has previously defaced Buddhist statues, and was unlikely to have the capacity or sophistication to execute an attack like Sunday's without assistance.

While there is a known transnational Islamist presence in places such as Pakistan, Malaysia, and the Philippines, Jaishankar said little is known about Islamic radicalism in Sri Lanka and that it was "premature" to speculate on which organizations might have been involved.

Christianity is a minority religion in Sri Lanka, accounting for less than 10% of the total population of 21.4 million. According to census data, 70.2% of Sri Lankans identify as Buddhist, 12% Hindu, 9.7% Muslim, and 7.4% Christian.

It is estimated that 82% of Sri Lankan Christians are Roman Catholic.

A social media blackout has been enforced as the authorities try to contain the violence and establish who carried out the attacks and why.

More than 1,000 people had come to the one of the explosion sites, St. Sebastian's Church, where 102 people were killed, according to Father Edmond Tillekeratne, social communications director for the Archdiocese of Colombo.

As the Easter services got underway at churches in the cities of Colombo, Negombo and Batticaloa, the bombers detonated their devices. The bombs blew out the tiled roofs of churches, killing worshipers. Images showed bloodied pews, broken glass and plumes of smoke.

"You can see pieces of flesh thrown all over the walls and on the sanctuary and even outside of the church," Tillekeratne said.

More blasts ripped through three luxury hotels in the capital city of Colombo: The Shangri-La, Cinnamon Grand and Kingsbury, all popular with foreign tourists and the country's business community. At the Shangri-La, the bomb was detonated just after 9 a.m local time at the Table One cafe as holidaymakers and guests were eating breakfast.

Jaishankar, who has visited the three hotels targeted, said there was "very little security" at any of the venues.

Another blast rocked a hotel in front of the Dehiwala Zoo in Dehiwala-Mount Lavinia. The final blast struck a private house in Mahawila Gardens, in Dematagoda, during a raid in connection with the attacks, officials said. Three police officers were killed.

In recent years, Sri Lanka has boomed as a holiday destination, welcoming 2.2 million inbound visitors in 2017 compared to just over one million in 2012, providing tourists with an affordable alternative to tropical destinations such as the Maldives.

On Monday morning, however, the city's beachfront hotel district, where several of the bombs struck, was heavily guarded by soldiers carrying AK47s and bomb-sniffing dogs were at closed hotel gates where guests were being checked in.

"We have not had any separatist movements in the past 10 years and this came as a shock to all of us," he said.

The civil war between the separatist Tamil Tigers and the Sri Lankan government ended in 2009, after claiming between 70,000 and 80,000 lives. Handling that conflict, Premadasa said, had prepared the government to deal with terrorism.

"During the 30-year terrorist war there were indiscriminate attacks on all institutions, they (the Tamil Tigers) did not spare any in their path towards a separatist state, but we were victorious in defeating terrorism," he added.

The targets of the attacks -- churches packed with the faithful on Easter Sunday and three five-star hotels catering to foreigners -- have figured in previous bombings in the Asia region and beyond in recent years.

In January 2019, ISIS claimed responsibility for an attack that killed at least 20 in a church in the Philippines. The attack also took place on a Sunday, when worshipers were gathered for mass.

In May 2018, ISIS claimed responsibility for carrying out attacks at three churches in Indonesia, killing at least 12 people and injuring dozens more. And, in 2017, on Palm Sunday, ISIS killed at least 49 people gathered for Mass at two churches in Egypt.

The collapse of the ISIS caliphate in Iraq and Syria has sent as many as 5,600 foreign fighters back to their home countries since October 2017.

Jaishankar said that Sri Lanka might have become complacent on terrorism since the end of its civil war. "This may end up being a wake up call for that," he added.