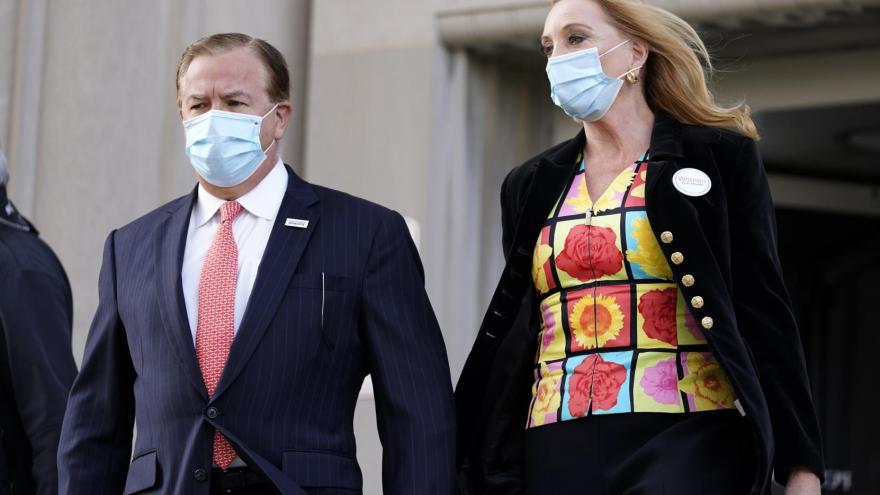 Mark and Patricia McCloskey leave court after pleading not guilty on Wednesday.

The McCloskeys drew national attention in late June after they were seen on video posted to social media brandishing guns outside their mansion at protesters walking on a private street to the home of St. Louis' mayor.

The McCloskeys each face a count of unlawful use of a weapon -- exhibiting, and a count of tampering with physical evidence in a felony prosecution, St. Louis Circuit Attorney Kimberly M. Gardner said in a statement. A grand jury decision to indict them was announced by a circuit court Wednesday.

The class E felony counts are punishable by one day up to 4 years in prison and a fine up to $10,000.

Joel Schwartz, the attorney for the couple, in a statement accused Gardner of politicizing the case and said he has filed a motion to disqualify her from the matter.

"I am confident that the Court will see that the Circuit Attorney has created, at a minimum, the appearance of impropriety, which casts serious doubt upon the fairness of the proceedings," he said. "Finally, I look forward to receiving and reviewing the discovery/reports in order to understand how the Circuit Attorney intends to support these allegations against the McCloskeys and disrupting their lives."

There was no immediate response from Gardner to CNN's request for comment.

In videos posted to social media in late June, Mark McCloskey is seen holding a long rifle and Patricia McCloskey a handgun as demonstrators -- who were protesting Mayor Lyda Krewson's decision to publish the names and addresses of people in favor of police reform -- walked outside their home.

Portland Place, the private street where the McCloskeys live, is near Krewson's home.

Mark McCloskey told CNN in July that he was "in imminent fear they (protesters) would run me over, kill me."

White House press secretary Kayleigh McEnany defended the couple, telling reporters that President Donald Trump "said it is absolutely absurd, what is happening to the McCloskeys."

Missouri Gov. Mike Parson has said he would pardon the McCloskeys if convicted.

In August, the couple spoke at the Republican National Convention, where they accused Democrats of wanting to "abolish" the suburbs.