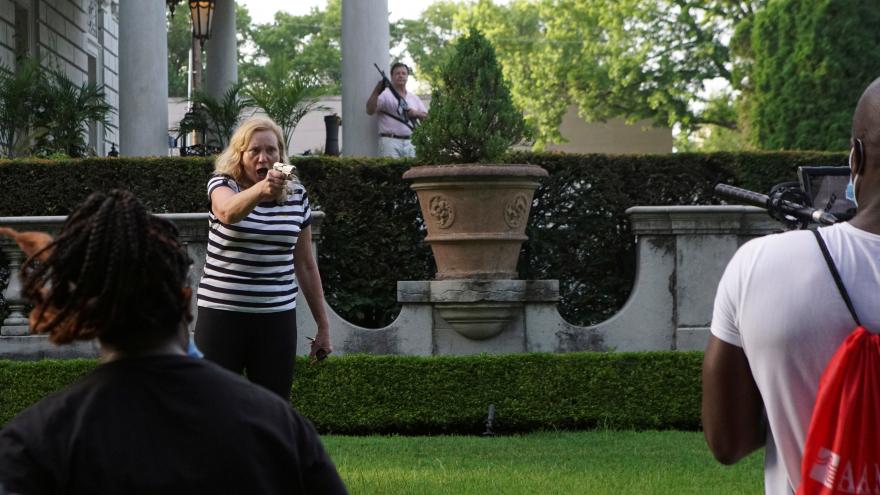 (CNN) -- The Missouri couple seen in a viral video brandishing guns at protesters outside their mansion have been charged, the St. Louis circuit attorney said Monday.

Patricia and Mark McCloskey are charged with unlawful use of a weapon, a class E felony, according to the complaint.

"It is illegal to wave weapons in a threatening manner at those participating in nonviolent protest, and while we are fortunate this situation did not escalate into deadly force, this type of conduct is unacceptable in St. Louis," Circuit Attorney Kimberly Gardner said in a statement.

Missouri Attorney General Eric Schmitt swiftly filed a brief in the case to have it dismissed, according to a statement from his office, and Gov. Mike Parson called the charges "outrageous."

In videos obtained by CNN, the pair were seen brandishing weapons outside their St. Louis home as demonstrators walked outside the mansion in late June.

Schmitt cited the state's "Castle Doctrine" that gives Missourians "broad rights" in protecting property and lives in his move to dismiss the case.

"As Missouri's Chief law enforcement officer, I won't stand by while Missouri law is being ignored," Schmitt said. "That's why I entered this case to seek its dismissal, to protect the rights of Missourians to defend their property under Missouri's Castle Doctrine."

Parson, in a series of tweets, railed against the charges, saying Gardner's office "has admitted there is a backlog of cases and dozens of homicides that haven't been prosecuted, yet she has accelerated this case forward," read the tweet.

"We must prioritize laws that keep our citizens safe over political motivations," Parson tweeted. "Kim Gardner owes every single family who has had a loved one murdered an explanation on why she has acted on the McCloskey case instead of theirs."

The decision to issue charges was made after an investigation with the St. Louis Police Department, Gardner said.

"As I always do, I am reviewing all available facts and the law and will apply them equally, regardless of the people involved," she said last week on Twitter.

An attorney for the couple expressed disappointment at the charges Monday.

The charges "are disheartening as I unequivocally believe no crime was committed," Joel Schwartz said in a statement.

"I, along with my clients, support the First Amendment right of every citizen to have their voice and opinion heard," Schwartz said.

"This right, however, must be balanced with the Second Amendment and Missouri law, which entitle each of us to protect our home and family from potential threats," he added.

Mark McCloskey told CNN he was afraid of the "mob" that day.

"I was a person scared for my life, protecting my wife, my home, my hearth, my livelihood," McCloskey told CNN's Chris Cuomo soon after the incident. "I was a victim of a mob that came through the gate."

"A mob does not have the right to charge your property or come on your property," Parson said at a news conference last week. "They had every right to protect themselves."

"I am open to recommending the McCloskey's participate in one of my office's diversion programs that are designed to reduce unnecessary involvement with the courts," Gardner said Monday. "I believe this would serve as a fair resolution to this matter."

Asked last week whether he would pardon the McCloskeys if they were convicted, Parson said, "By all means I would."

The case has caught the attention of President Trump, Parson said last week, adding he had spoken with the President about it.