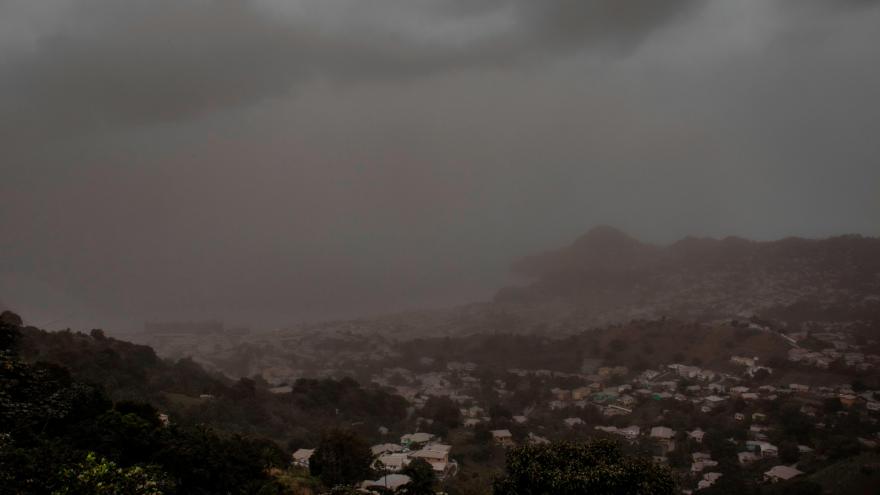 (CNN) -- There has been a massive power outage on the Caribbean island of St. Vincent where La Soufrière volcano began erupting Friday, St. Vincent and the Grenadines National Emergency Management Organization reported Sunday.

"Day no 3 and everything looks like a battle zone. Dreary morning with the ash beginning to harden on the ground due to overnight showers. Many homes still without water and electricity," NEMO said in one of a series of tweets.

Volcanic ash has been continuing to fall and there are warnings of more danger ahead.

"Pyroclastic flows" at La Soufriere could possibly cause destruction and devastation of areas close to the volcano, according to NEMO.

Pyroclastic flows "contain a high-density mix of hot lava blocks, pumice, ash and volcanic gas. They move at very high speed down volcanic slopes, typically following valleys," according to the USGS and "destroy nearly everything in their path."

The University of the West Indies Seismic Research Centre tweeted photos taken by one of its researchers Sunday morning of an ash covered landscape in St. Vincent, using the hashtag #stilldangerous.

It posted a scientific update on Twitter at 9 a.m. ET, saying that tremors lasting up to 20 minutes had continued over the previous 12 hours.

"Based on visual observations and satellite imagery, the intervals are associated with periods of explosive activity or enhanced venting," it said.

"Thunder and lightning were experienced during these periods."

Ash had continued to fall on the island overnight and had also impacted neighboring islands, the Grenadines, Barbados and St. Lucia, it said. "Explosions and accompanying ashfall, of similar or larger magnitude, are likely to continue to occur over the next few days."

On Thursday, Prime Minister Ralph Gonsalves declared a disaster alert prompted by a change in the volcano's eruptive activity. He issued an evacuation order for all residents living in what is considered a "red zone." Gonsalves has said it could take four months for life to return to normal on the island.

Authorities have said it is likely that explosive eruptions could continue "for days and possibly weeks" after the first eruption Friday emitted a plume of ash that extended 20,000 feet (6,096 meters) into the sky.

Friday morning's eruption was the first by the La Soufrière volcano since April 1979, according to NEMO.

La Soufrière is located on the largest island of the St. Vincent and the Grenadines chain.