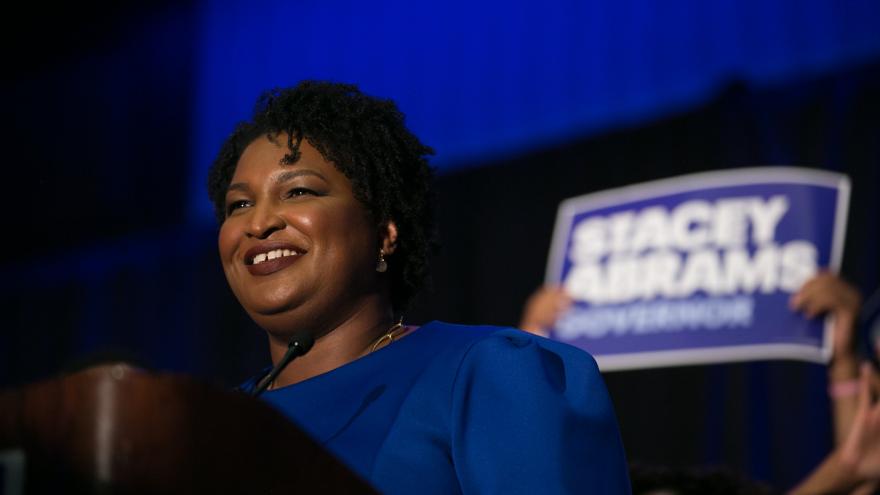 (CNN) -- Former Georgia gubernatorial candidate Stacey Abrams said Tuesday she has accepted an invitation to give the Democratic response to the State of the Union address.

Abrams has been talked about as a rising star in the Democratic Party. She gained a national following during her unsuccessful bid to become governor of Georgia last fall. Senate Minority Leader Chuck Schumer said Tuesday said he called Abrams three weeks ago to discuss the idea and that she has since accepted.

"At a moment when our nation needs to hear from leaders who can unite for a common purpose, I am honored to be delivering the Democratic State of the Union response," Abrams tweeted.

The Democratic response will give Abrams a major platform to counter the President following his address to Congress and the nation — and the speech is sure to further elevate her national profile.

"Her electrifying message of courage, perseverance and hope reinvigorated our nation and our politics, and continues to inspire millions of Americans in every part of the country," House Speaker Nancy Pelosi said in a statement. "Stacey Abrams embodies the American Dream, and her powerful message of progress for all is deeply needed during this time for our country."

"Stacey Abrams offers a welcome, stark contrast to President (Donald) Trump's politics of division and lack of leadership as American families are still feeling the impacts of his self-imposed shutdown," Schumer said in a statement. "Stacey Abrams is a present and future leader in this country. She is a dynamic, moral leader; she delivered results on the issues that matter most to Americans; and she tirelessly pursues fairness and justice for everyone in her state."

The State of the Union is on track to proceed next week on Tuesday after the government shutdown threw the date it would take place into question.

Pelosi initially invited Trump to deliver the speech on January 29 — but later suggested he postpone the address until the shutdown ended or deliver it in writing.

That led to a dramatic back and forth between Pelosi and the President. Trump said he still intended to deliver the speech on the original date followed by Pelosi moving to deny him access to the House chamber. Trump backed down after that and this week the speaker and the President agreed to hold the speech on Tuesday, which comes after the President signed legislation last week to end what had become the longest shutdown in US history.

Abrams' campaign in Georgia attracted national buzz with celebrities like Oprah Winfrey coming to the state to campaign on her behalf.

She narrowly lost her gubernatorial bid to Republican opponent Brian Kemp and the race ended on a contentious note with Abrams saying that "democracy failed Georgia."

"Make no mistake, the former secretary of state was deliberate and intentional in his actions," Abrams said, referring to Kemp, who served as the state's chief elections officer for nearly a decade before resigning after overseeing his own contest. "I know that eight years of systemic disenfranchisement, disinvestment and incompetence had its desired affect on the electoral process in Georgia."