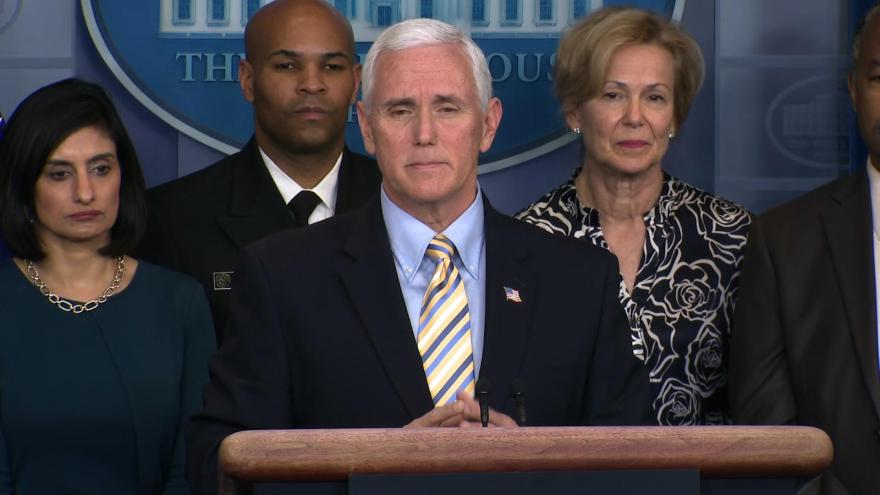 "‪This evening we were notified that a member of the Office of the Vice President tested positive for the Coronavirus. Neither President Trump nor Vice President Pence had close contact with the individual," said Katie Miller. "Further contact tracing is being conducted in accordance with CDC guidelines."

Pence's chief of staff Marc Short said Saturday that the staff member diagnosed with the coronavirus "is recovering and has very, very mild symptoms."

"He had cold-like symptoms for about a day and a half, and had test results come back Thursday night. He was not in the office Tuesday, Wednesday, Thursday or Friday," he told reporters at the White House.

Short said that the vice president's office has "taken more precautions," and that the White House physician's office "gave guidance about people he was interacting with previous to that."

"Some staff will probably be encouraged to abide by the quarantines and stay home," he said.

Asked if there would be more testing of White House staffers and task force members, Short said there might be, but he did confirm that Pence has not yet been tested.

Pence has been the Trump administration's point person on coordinating the government's response to the coronavirus pandemic.

While the staffer is the closest confirmed case to Pence that is publicly known, it isn't his first potential brush with the virus.

At least two people tested positive for the coronavirus after attending the American Israel Public Affairs Committee's Policy Conference in Washington, which was attended by Pence as well as several lawmakers and aides.

Both Pence and President Donald Trump attended the Conservative Political Action Conference last month, where a high-profile attendee also tested positive for coronavirus. Interactions with that attendee sent multiple Republican lawmakers into self-quarantine in the weeks following the conference.

There is no indication that either Trump or Pence "met with or were in close proximity to the attendee" after attending the conference, White House press secretary Stephanie Grisham said in a statement earlier this month.

As the head of the coronavirus task force, the vice president has maintained fairly smooth relationships with the Democratic governors of states hit hard by the virus and projected an image of calm and organization in his near-daily appearances at the White House briefing room lectern to update the nation on the task force's efforts.

Pence's task force still faces serious obstacles. The federal government still does not have a handle on the scale of the pandemic in the US, due to early missteps and insufficient testing. Hospitals are beginning to express serious concerns about shortages of crucial medical equipment, from protective gear to ventilators.

Recent cases on Capitol Hill have added to fears of community spread of coronavirus among Washington politicians.

On Wednesday, two members of Congress, Democratic Rep. Ben McAdams of Utah and Republican Rep. Mario Diaz-Balart of Florida, announced that they had tested positive for the virus. Last week, an employee in the office of Sen. Maria Cantwell, a Washington Democrat, tested positive for the virus in the first publicly known case of a congressional staffer with the disease.

Republicans Sen. Ted Cruz of Texas, Rep. Matt Gaetz of Florida, Rep. Doug Collins of Georgia, Rep. Paul Gosar of Arizona and Meadows all opted to self-quarantine after potential or confirmed contact with the CPAC attendee who tested positive. Many others have done so after interacting with constituents or other individuals who later tested positive for the virus.

Some have been able to confirm that they have not been infected. Gaetz, South Carolina Sen. Lindsey Graham and Rep. John Yarmuth of Kentucky have all announced over the past two weeks that they tested negative for coronavirus.

Trump says US not currently considering a nationwide lockdown