Staffers resolve to put out paper despite fatal shooting 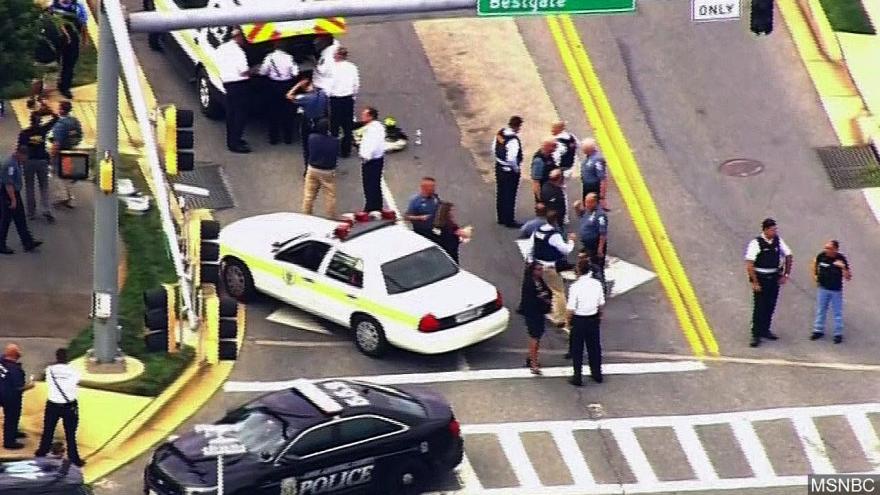 ANNAPOLIS, Md. (AP) — The grieving and the reporting sort of jumbled together for staffers at The Capital Gazette after a fatal shooting at the newspaper, but they were determined to put out the next day's edition.

Journalists with the Annapolis-based daily huddled under a covered parking deck of the Annapolis Mall, not far from where scores of other media outlets were clumped together Thursday awaiting further details of the shooting that left five people dead, including colleagues, and others injured.

Editor Rick Hutzell called a few of his journalists over to talk, a discussion punctuated with hugs and staggered expressions.

"We're trying to do our job and deal with five people" who lost their lives, said reporter Pat Furgurson, whose wife and adult son were with him at the mall.

Furgurson said his colleagues were "just people trying to do their job for the public."

"You think something like this might happen in Afghanistan, not in a newsroom a block away from the mall," he said, reflecting on what appeared to be one of the deadliest attacks on journalists in U.S. history. Police later said the gunman explicitly targeted the newspaper.

The Capital is an institution in Maryland's capital and was one of the last dailies to switch from publishing in the afternoon to mornings. Its sister publication, the Maryland Gazette, was founded in 1727 and is one of the oldest papers in America. In 1767, it became the first paper in America to be published by a woman, Anne Catherine Green, who led opposition to the stamp tax in the years leading up to the American Revolution.

For many years The Capital was published by diplomat Philip Merrill, who died in 2006. It was sold in 2014 to the Baltimore Sun Media Group.

Following in that history, the paper's staffers were resolute Thursday that they would publish despite the tragedy. Capital reporter Chase Cook wrote on Twitter: "I can tell you this: We are putting out a damn paper tomorrow."

Reporters brushed aside any logistical difficulties putting out a newspaper when the newsroom is an off-limits crime scene.

High school sports editor Bob Hough told The Associated Press he and a colleague were working on the sports section from his home Thursday evening.

"I don't know that there was ever any thought to not putting something together," said Hough, who wasn't at the office when the shooting broke out. Hough said they were doing a full five-page section in collaboration with the design team based at the Baltimore Sun that always lays out the pages.

He noted that some of his colleagues were out reporting on the shooting story as it continued to unfold late Thursday and said he expected the next day's paper would include that coverage and whatever else would be in a typical Friday paper. By 10:30 p.m. Thursday, the Capital's website had in-depth stories on the shootings, a yearslong feud the suspect had with the paper and a photo and profile of each of the journalists' slain co-workers.

Photographer Josh McKerrow edited photos on a laptop in the garage deck.