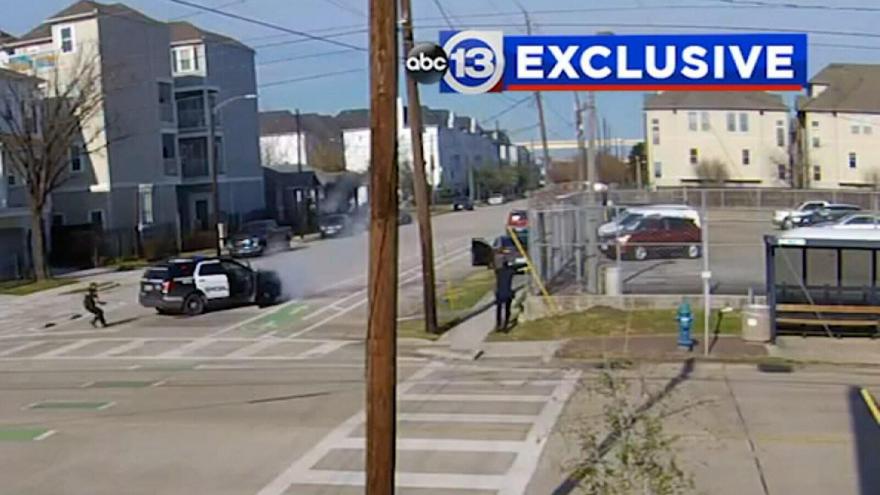 The suspect, who police have not identified, came out at 7:45 p.m. CT with his hands raised and surrendered, Houston Police Department Chief Troy Finner said. The man had a neck wound that likely would require surgery, the chief added.

The three officers were in stable condition at a hospital, Houston Mayor Sylvester Turner said. They are in good spirits and talkative, he added.

The shooting comes four days after Cpl. Charles Galloway of Harris County Constable Precinct 5 was fatally shot during a traffic stop. A suspect in the case was arrested in Mexico and returned to the Houston area on Wednesday night.

In Thursday's standoff, the suspect barricaded in a home for hours after fleeing the shooting scene in a Mercedes he carjacked. Police officers pursued him to the residence, which was about 5 miles away.

"Officers surrounded that house. The suspect fired multiple times. Thank God he did not strike any of the officers," Finner said at an earlier news conference before the suspect was detained. "Officers returned fire. Again, we don't know if that suspect is injured."

Finner said at the most recent briefing that authorities believe the man lived at the house and he fired multiple times at a SWAT team.

Police said they believe the people who were in the home where the suspect was barricaded ran out when he entered. Douglas Griffith, president of the Houston Police Officers' Union, said authorities believed the suspect had multiple weapons.

Griffith said the wounded officers were very fortunate and had one gunshot wound each -- one was shot in the arm, another in the leg and another in the foot.

The chief said a woman who was carjacked was traumatized but physically fine.

CNN affiliate KTRK exclusively acquired video that shows the beginning of Thursday's shootout. The station reported the video came from a surveillance camera and it shows a Dodge Charger crash as it tries to make a left turn. A police SUV stops behind the car and one officer gets out, aiming a pistol at the car as the officer looks for cover.

Two other officers emerge from another SUV and run to the first patrol vehicle as rapid-fire gunshots can be heard. There appears to be a person in the open driver's door of the suspect vehicle.

After the flurry of gunfire, the officers run past the car in pursuit.

Finner said officers described the weapon used by the suspect "as an automatic, fully automatic weapon." Finner said he couldn't confirm that while the suspect was barricaded.

The initial incident began as a car chase after police, responding to a home, pursued the fleeing suspect.

Stephen Hinson told CNN affiliate KHOU that he thought he heard "some type of crash" then what he estimated to be 50 gunshots.

"I looked out my window and I saw the officers running and I realized there was an officer down right in front of my town home."

The Bureau of Alcohol, Tobacco, Firearms and Explosives office in Houston said the area gun strike force was responding to the shooting.

"My thoughts and prayers go out to them, and will be at the hospital soon to check on their recovery, thank them for their service and speak to their families," Turner said of the officers. "I ask everyone to pray for the officers who were shot and for every law enforcement officer working on the streets of Houston."