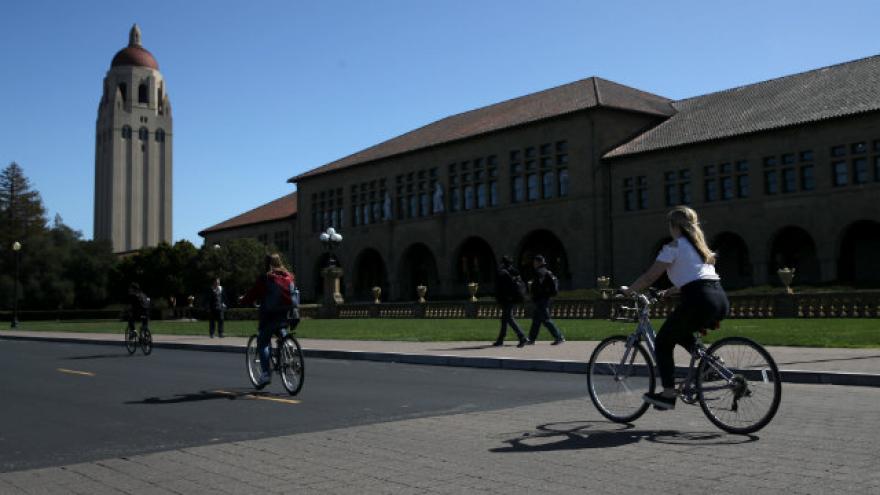 Stanford University expelled a student who put false material in their college application and was linked to a $500,000 donation from the charity at the heart of the college admissions scam. Photo courtesy Justin Sullivan / Getty Images

(CNN) -- Stanford University expelled a student who put false material in their college application and was linked to a $500,000 donation from the charity at the heart of the college admissions scam.

"We determined that some of the material in the student's application is false, and, in accordance with our policies, have rescinded admission," Stanford said in an update on its website. "Any credits earned have also been vacated. The student is no longer on Stanford's campus."

The student is not named in the statement or in court documents.

Stanford sailing coach John Vandemoer pleaded guilty last month to conspiracy to commit racketeering for arranging bribes of $110,000 and $160,000 to the sailing program in exchange for falsely designating two applicants as sailing recruits. Neither of the students had competitive sailing experience, the criminal complaint states.

The money was funneled from wealthy parents to a charity run by Rick Singer, who then directed the payments to Vandemoer, according to the complaint.

However, neither of those students completed the application process, so neither were admitted nor enrolled at the school, Stanford said.

A third student, though, was associated with a contribution to Stanford's sailing program from the charity central to the scam, known as Key Worldwide Foundation, Stanford said.

"The contribution was made several months after the student was admitted to Stanford. The student had no recommendation from the former sailing coach, or any other coach, and has not at any time had an affiliation with the Stanford sailing program or any other Stanford athletic team," Stanford said.

Stanford is the second school to expel a student as part of the fallout of the college admissions scam. Yale University kicked out a student two weeks ago whose family paid $1.2 million to get her admitted as a fake soccer player.