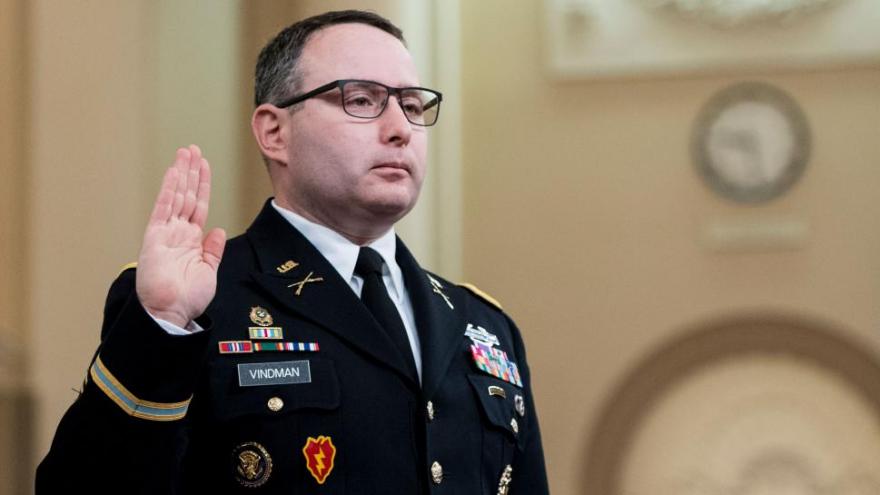 (CNN) -- Retired Army Lt. Col. Alexander Vindman, who served on the National Security Council and emerged as a star witness against then-President Donald Trump during the 2019 Ukraine impeachment, is suing Donald Trump Jr., Rudy Giuliani and former Trump White House staffers, alleging they conspired against him.

Vindman, in a new lawsuit filed in DC District Court, said Trump's family, his lawyers, right-wing media and others in the White House tried to intimidate and retaliate against him because he was willing to testify against the President, calling out Trump's entreaties of Ukraine for his personal political gain.

He bluntly called the efforts to intimidate him obstruction. And the lawsuit, articulating over 73 pages Vindman's saga in Trump's first impeachment, aims to capture the plight whistleblowers face after standing up to a powerful political machine.

CNN has reached out to those named in the lawsuit for comment.

Vindman, the former director of European Affairs at the US National Security Council, seeks an unspecified amount in damages, saying his complaint aims for "long-overdue accountability." Also named in his suit are former White House deputy chief of staff Dan Scavino and Julia Hahn, a former Breitbart editor who worked in the Trump White House.

The lawsuit alleges that former President Trump, who is not named as a defendant, and his allies "engaged in an intentional, concerted campaign of unlawful intimidation and retaliation" against Vindman "to prevent him from and then punish him for testifying truthfully before Congress during impeachment proceedings against President Trump."

"The coordination and agreement on purpose and strategy is exactly what made this unlawful campaign against Lt. Col. Vindman so damaging," Vindman's lawsuit adds.

Vindman was a key witness in Trump's 2019 impeachment trial, as he was on the phone when Trump pressed Ukrainian President Volodymyr Zelensky to investigate Democrats, including Joe Biden. CNN previously reported Vindman testified that he was concerned about the call between Trump and the Ukrainian President, and when he raised those concerns, he was told not to discuss the call.

Trump fired Vindman from the National Security Council in February 2020 and he was consequently reassigned to the Army.

In his lawsuit, Vindman highlighted tweets from Trump in September 2019 that warned of "Big Consequences!" for people who provided information about the Ukraine call. But he also detailed what he says were efforts in the White House and with a media messaging plan to attack him leading up to, during and after his public testimony.

He called Giuliani the person "at the center of the coordinated effort to coerce Ukraine into investigating the Bidens."

Vindman also said that Scavino, at the White House, channeled Trump's intimidation campaign by writing the President's tweets. Hahn, also at the White House, was in charge of directing Trump's messaging among surrogates and right-wing media, such as pundit Laura Ingraham and on the Fox Channel. Vindman also accused Donald Trump Jr. of amplifying disinformation on social media.

Vindman retired from the Army in July 2020 after more than 21 years of military service. His lawyer told CNN at the time that the decision was prompted because he determined that his future in the armed forces "will forever be limited" due to political retaliation by Trump and his allies.

Vindman said in his lawsuit that non-government organizations like think tanks and speakers bureaus have also shied away from associating with him because they wanted to remain non-partisan. "These organizations did not want to risk losing part of their audience or find themselves on the receiving end of the same harassment and intimidation that were directed toward him," his lawsuit says.

He and his family were so threatened, they considered moving to a military base about two years ago, but did not so they would avoid media attention at the time, Vindman notes.

Trump was ultimately impeached by the US House and acquitted by the Senate twice, for the Ukraine call and the January 6 riot at the US Capitol. In the Ukraine impeachment, he was impeached for abuse of power and for obstructing Congress. A House select committee continues to investigate Trump's attempts to overturn his 2020 election loss, with a committee member publicly warning he may be attempting to chill witnesses from complying with subpoenas.

Trump's anti-cooperation approach "reverberates to this day, as witnesses subpoenaed by Congress in connection with its investigation into the events of January 6, 2021, continue to heed former President Trump's instructions to defy those subpoenas," Vindman's lawsuit notes.

Vindman has reemerged in recent months in the public eye, appearing as himself in the recent season finale of the HBO sitcom "Curb Your Enthusiasm" in January.