Starbucks opens its biggest store ever 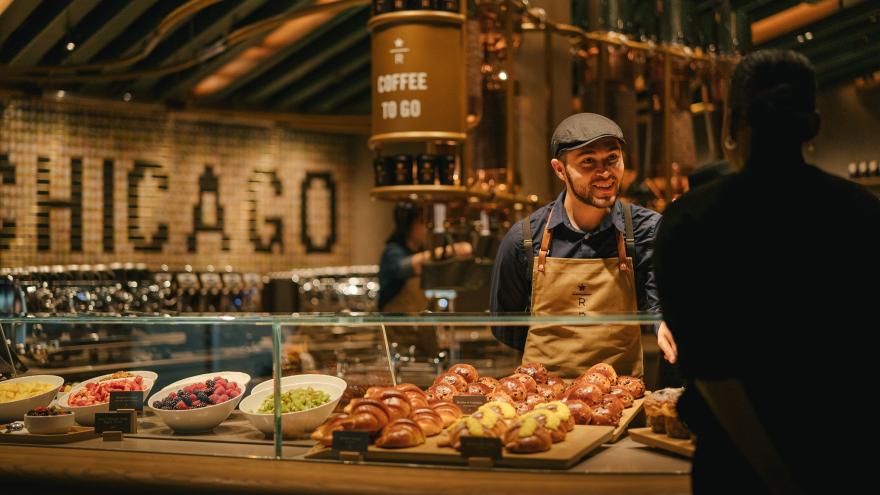 (CNN) -- Chicago just got a major caffeine jolt from Starbucks.

The coffee chain opened its world's largest Roastery location on Friday. The five-story location is 35,000 square feet, overtaking the Tokyo Roastery as Starbucks' biggest location. Located in the city's Magnificent Mile neighborhood, the new Roastery is replacing a former Crate and Barrel location. It was first announced in 2017.

Starbucks said the Chicago Roastery is a tribute to the city and region, where it has nearly 800 Starbucks stores and employs more than 18,000 people. The Roastery itself has 200 employees.

Roasteries are intended to be tourist attractions. They feature specialty coffees and teas, on-premise roasters and massive coffee casks where freshly roasted beans are held. They also have bars with craft cocktails and serve fancier food than a normal Starbucks location.

The Chicago location has all of that and a unique design that emphasizes the building's natural light from the massive windows. Centrally located in the store is a 56-foot steel cask that stores coffee beans. Surrounding it is the region's first-ever curved escalator that gives customers a 360-degree view of the store.

Selling coffee is a central part of the store. There are three coffee bars that offer a variety of brewing methods, including an "Experiential" coffee car that "provides customers the opportunity to immerse in the art, science, and theatre of coffee," according to a press release.

A mix of alcoholic and non-alcoholic drinks are served at its Arriviamo Bar, along with Chicago-specific cocktails. And this Roastery is the only location in the United States to sell liquid nitrogen gelato, a sweet dessert designed to be eaten with coffee. It's also served in the Milan Roastery.

Princi, which is Starbucks' bakery and cafe concept, is also featured prominently. It offers a full menu of baked goods and heartier items, like pizza.

This is Starbucks' sixth Roastery location. The company uses the spaces test out design concepts and menu items — and to double down on its promise of offering a "third place" between home and work, even as it focuses on speed and convenience elsewhere.

Roastery joins Starbucks' growing line of store concepts. Earlier this month, it opened "Starbucks Pick-Up," a first-of-its-kind location in New York that encourages orders from its app. The location is a fraction the size of its normal cafe.

The Chicago Roastery will be open seven days a week.