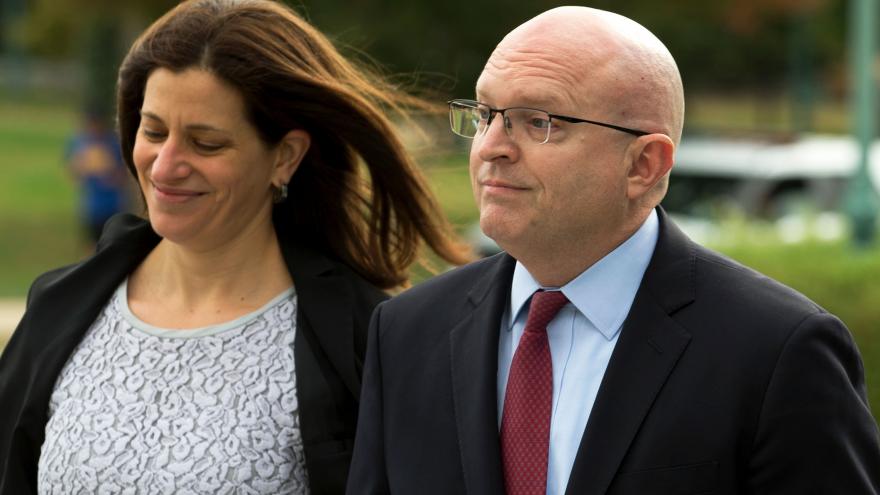 (CNN) -- Acting Assistant Secretary of State Philip Reeker was expected to testify in the impeachment inquiry on Saturday that he did not find out there was a push by Trump administration officials for Ukraine to publicly announce investigations into Vice President Joe Biden and the 2016 election until the whistleblower complaint was made public, a source familiar with his testimony told CNN.

While Reeker's testimony for the Democratic led House impeachment inquiry appeared to be absent the more explosive allegations that came from depositions earlier in the week with regard to the assistance, his comments are expected to color in details surrounding the firing of the Marie Yovanovitch, the former US ambassador to Ukraine who was discharged at President Donald Trump's behest.

Reeker was involved in the discussions about Yovanovitch dating back to his first week on the job in March. He was an advocate of an internal push for the State Department to put out a statement of support for Yovanovitch when she left the post. But other top State Department officials under Secretary Mike Pompeo forbid the kind of statement he thought was necessary.

Reeker has known Yovanovitch for over 20 years and, as many other foreign service officers, supported her work.

Yovanovitch said that she was told the decision was due to Trump losing confidence in her based on "unfounded and false claims by people with clearly questionable motives."

Former State Department senior adviser Michael McKinley testified earlier this month that he repeatedly asked Pompeo for a show of support for Yovanovitch — but was greeted with silence from Pompeo, according to two sources with knowledge of his testimony. His decision to resign was triggered in part because the department did not publicly support Yovanovitch. Trump had disparaged Yovanovitch in his phone call with President Zelensky which was made public amid the impeachment inquiry.

Reeker reported to State's Under Secretary for Political Affairs, David Hale and State's Counselor Ulrich Brechbuhl — and he was not in direct contact with Pompeo on the topic, the source familiar with his testimony told CNN. But the refusal to issue the kind of statement Reeker thought was necessary would have come from Pompeo himself.

Reeker, who oversaw US policy for about 50 countries given his role in overseeing all of Europe for the State Department, was not involved in the granular dynamics of Ukraine policy. In March, when the career foreign service officer assumed his top job at State, it was already clear that former US Special Envoy for Ukraine Kurt Volker and US ambassador to the European Union Gordon Sondland were the leads on Ukraine policy and he did not seek to upend their efforts.

"His impression was that they (Volker and Sondland) were already doing it when he came in," the source said. "Could he have come in and said I want to take back Ukraine, maybe. But it was clear that Volker reports to the Secretary and Sondland told anyone who wanted to know that he had Trump's ear. Why would he have done that?"

Reeker is testifying behind closed doors in a rare Saturday session before the House Intelligence, Foreign Affairs and Oversight committees as part of the impeachment inquiry sparked by a whistleblower complaint alleging Trump pushed Ukraine to open investigations that would help his reelection campaign at the same time that US security aid to Ukraine had been frozen.

LIVE UPDATES: The latest on the Trump impeachment inquiry

According to the source familiar with his testimony, Reeker found out that the Ukraine assistance was being held up in late July. He was not part of a significant July 18 meeting when the hold was initially announced due to an Office of Management and Budget review, though he heard about it from colleagues. Reeker was then in another interagency meeting about the hold a couple of weeks later where the OMB review was cited, but no details were presented about the reason for the OMB review, according to the source.

Reeker was then tracking the issue, but he also knew that other countries also had their assistance held up by the administration. Reeker also heard Defense officials say that the aid needed to be released, as Laura Cooper said in her deposition earlier this week, during the interagency meeting he had attended, the source said.

When it came to the President's personal attorney, Rudy Giuliani, Reeker was not happy about his involvement, according to the source. But he never issued any formal complaint. When Volker told Reeker that he would be meeting with him, Reeker's response was along the lines of "you do you." Reeker was expected to testify Saturday that he believed it was within Volker's job description if he wanted to meet with Giuliani.

George Kent, one of Reeker's seven deputies, told Congress that his supervisor told him to lie low when he brought up concerns about Giuliani. The source did not believe Reeker was the one who told him to keep his head down, though they did discuss Giuliani.

Kupperman filed suit Friday asking a judge to decide whether he had to comply with the House subpoena, given the White House's position that the impeachment inquiry throwing his appearance into doubt.