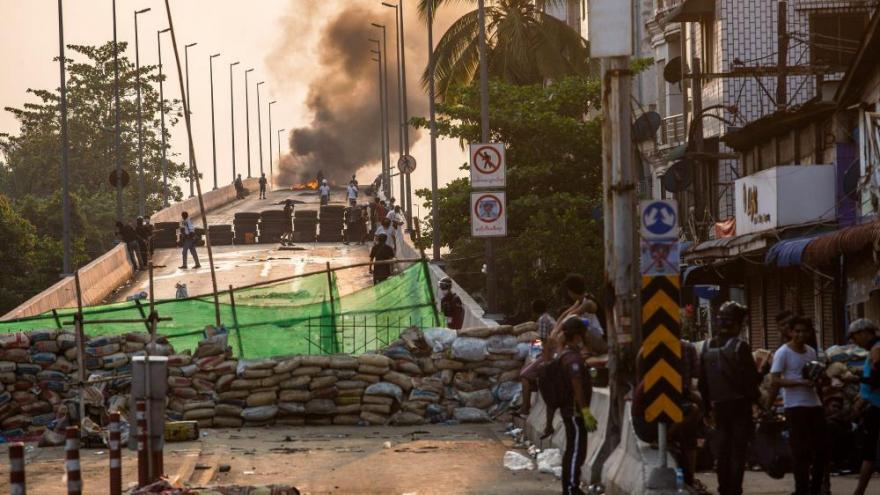 The State Department has ordered the departure of all non-emergency US government personnel and their family members from Myanmar. Anti-coup protesters are shown in Yangon, Myanmar Wednesday, March 17, 2021.

(CNN) -- The State Department has ordered the departure of all non-emergency US government personnel and their family members from Myanmar as deadly crackdowns by the country's military continue.

Hundreds are said to have been killed and injured in the wake of the military coup that deposed Myanmar's civilian leadership as security forces have used lethal force against protesters.

In February, the State Department allowed for the voluntary departure of non-emergency personnel from the country -- the ordered departure announced Tuesday makes it mandatory and leaves only select employees at the Embassy in Yangon.

"The Department of State made the decision to authorize ordered departure from Burma because the safety and security of US government personnel and their dependents, as well as private US citizens is the Department's highest priority," a State Department spokesperson told CNN.

The embassy "will remain open to the public and continues to provide a limited range of consular services to both US citizens and visa applicants due to Covid-19 restrictions," the spokesperson said.

The State Department continues to warn American citizens against traveling to Myanmar "due to COVID-19 as well as areas of civil unrest and armed violence," according to a travel advisory.

"We ask US citizens to assess their own personal circumstances, while carefully considering that the reduced footprint of the mission as a result of this decision could have future impacts on our ability to assist US citizens. If they decide to depart, they should do so as soon as practicable," the spokesperson said. "At this time, commercial flights are still available, and we encourage US citizens to use those options. We are monitoring the availability of flights departing Burma and will consider a charter flight should it be necessary."

On Tuesday, Secretary of State Tony Blinken again condemned the deadly violence "in the strongest terms."

"Nonviolent protestors in Burma have been killed, beaten, imprisoned, including on Saturday, when more than 100 people were reportedly killed by the military. Many of those killed were protesting on Armed Forces Day; others simply bystanders. The military said in advance that they might shoot protestors in the back or the head. And they've made good on that threat. Among those reportedly killed, four children -- the youngest a 5-year-old boy," he said.

"We continue to call on the military regime to release all those people who've been unjustly detained; stop its attacks on civil society members, journalists, labor unionists; halt the killings by its security forces; and return to power the democratically elected government," he said. "The United States is committed to working with its allies and partners to hold the perpetrators of these abhorrent acts accountable."

The Biden administration has taken a series of actions aimed at pressuring the military junta, leveling sanctions against its leadership, cutting foreign assistance to the government and most recently cutting all diplomatic trade engagement.