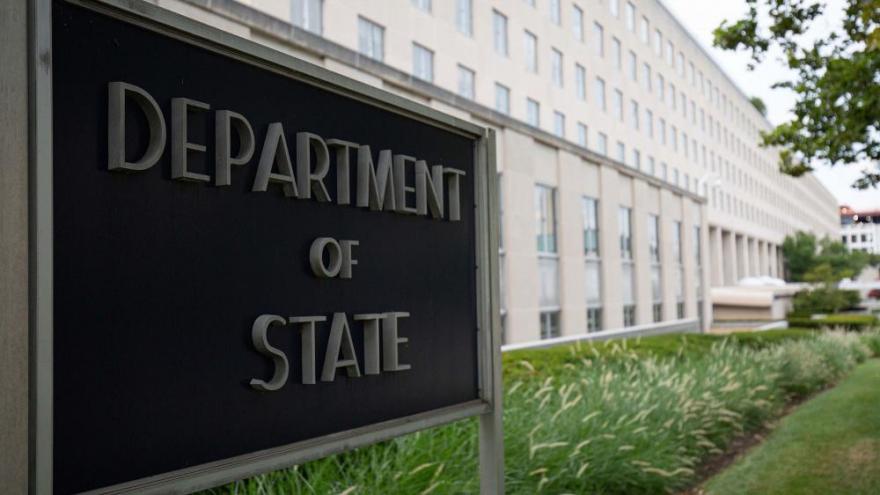 The US Department of State building is seen in Washington, DC, on July 22, 2019.

(CNN) -- The State Department is reverting back to Phase 1 Covid-19 guidelines, which include limiting travel to mission critical trips and putting restrictions on the size of gatherings, according to a department-wide memo from a top State Department official which was reviewed by CNN.

The plan is to return from Phase 2 guidelines to the more restrictive Phase 1 for almost a month starting Monday, a memo from Under Secretary for Management Brian Bulatao said. The move comes as the US government begins to receive and distribute a limited number of Covid-19 vaccine doses, and the virus drives cases, hospitalizations and deaths around the country to record levels.

Bulatao's announcement follows Secretary of State Mike Pompeo's decision to host large holiday gatherings in recent weeks, one of which had a guest list of 900 people. The parties infuriated State Department officials who viewed the gatherings as possible opportunities for Covid to spread. Pompeo had to cancel some of those parties last week after he was exposed to someone who tested positive for the virus and had to quarantine.

"Effective today, Monday, December 21, we are officially regressing to Phase 1 in the National Capital Region (NCR)," Bulatao wrote in the memo. "The move to Phase 1 limits official travel to mission critical movements only and adds additional restrictions to visitor access, size of gatherings, and public facing Consular operations, on top of the maximum telework posture we adopted in November."

"Supervisors should continue to ensure that mission critical work requiring in-office presence within Phase 1 guidelines continues in order to support our global operations and serve the American people. We will return to Phase 2 in the [National Capital Region] on Monday, January 18, while we evaluate data and assess local health conditions on an ongoing basis."

The State Department has not replied to a request for comment.

Phase 1 only allows up to 40% of the workforce to work onsite, a big reduction from Phase 2 which allows up to 80% of employees to return to work onsite. Phase 2 also allowed for small group gatherings, while Phase 1 does not allow for congregating in groups any larger than 10 people when social distancing cannot be achieved.

The State Department had moved into Phase 2 of its "Diplomacy Strong" plan in July despite the concerns of the American Foreign Service Association, which represents almost 17,000 active duty and retired foreign service officers.

Bulatao also said that State Department staff began receiving shots of the vaccine last week but did not specify who got the initial inoculations. He reiterated that the department is getting a limited number of vaccines in these early days.

"The Department has received a limited number of vaccines in our first tranche and began distribution and inoculations last week. Department leadership continues to engage with Operation Warp Speed and plans to deploy the Covid-19 vaccine to the broader workforce as soon as it is made available," Bulatao wrote.

The Blair House does not have any State Department holiday parties on the schedule this week, but Blair House staff could take part in President-elect Joe Biden's inauguration.

CNN reported last week that the State Department expected to receive a "very limited number of vaccines" and would distribute them to prioritized individuals -- a group that includes frontline medical personnel; critical operations, maintenance, and custodial staff; personnel supporting the Department's 24/7 watch centers; mission-critical Diplomatic Security personnel in the National Capital Region and American personnel in Kabul, Baghdad, and Mogadishu.