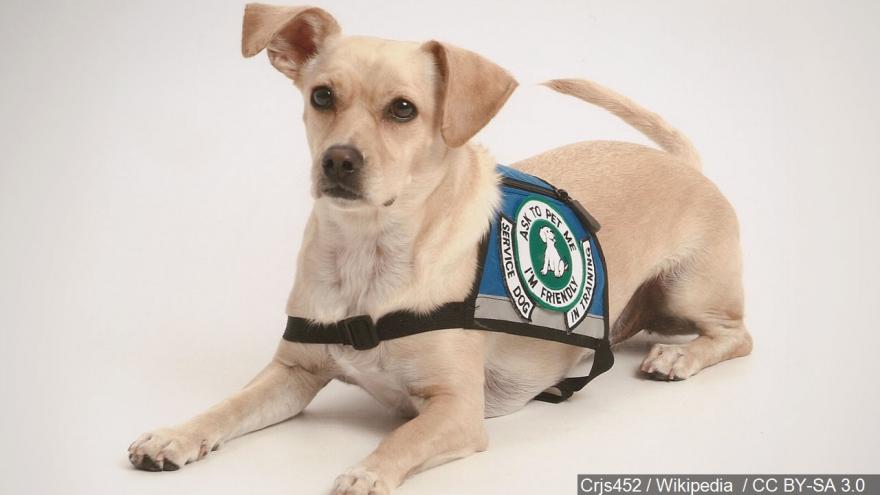 FLINT, Mich. (WNEM/CNN) -- You see a dog enter a restaurant with a vest that says "service dog."

How do you, or the restaurant, know if the dog is actually a trained service dog?

It's a problem that has prompted more than a dozen states to crack down on people trying to pass off their pet as a service animal.

"They make me angry, they really do," said Colleen Belanger.

Belanger has a service dog and she is upset people are using fake service dogs.

She said it is a growing concern as more and more people are taking advantage of the system.

Some dog owners buy service costumes online so they can take their untrained dogs into places they don't belong.

Belanger said it's not right because her dog Madison is much more than a pet.

"This is a medical device to me. It's the same as having a wheelchair, cane or oxygen," Belanger said.

For Madison to become a service dog, she had to be put through rigorous training and documentation.

Belanger said having Madison with her is a matter of life or death.

Belanger has asthma and a severe allergy, which is something Madison has been taught to detect and prevent.

"The non-service dog animals are not really trained. They are no level near the amount of training real service dogs are. So you will have problems of noise and barking and possible biting. You just never know what these untrained dogs will do," Favre said.

"It's a misdemeanor, a low level crime. Possibly 90 days in jail and a fine," Favre said.

As for Belanger, she said fake service animals could potentially ruin the good reputations of so many life saving animals. She hopes striker laws are put in place.

"Those of us who are disabled, we need this. So we can go out and enjoy life just like other people do," Belanger said.

While Michigan passed a law making it illegal to lie about a service animal, Favre said there is no state or federal law requiring a person to prove to a business their service animal is legitimate.