States have been offering big prizes for those who are vaccinated. Companies are now doing the same 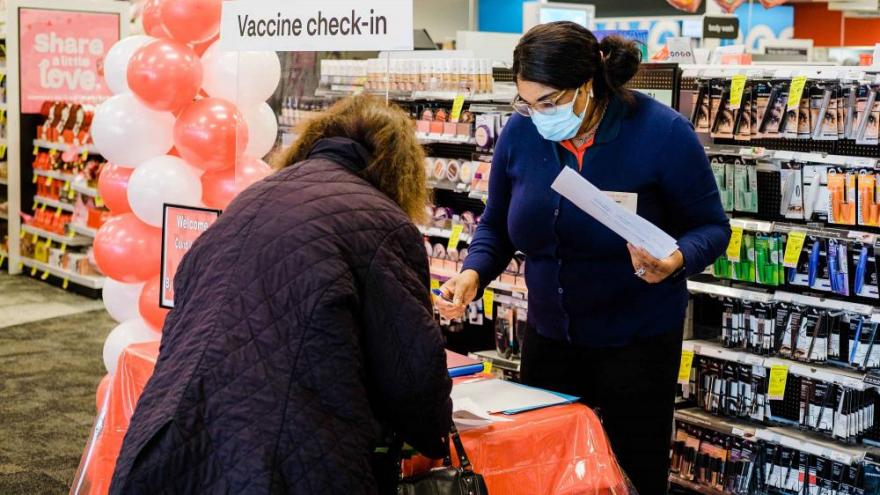 A person gets checked in to receive a Covid-19 vaccine at a CVS Pharmacy location in Eastchester, New York.

(CNN) -- What do lotteries, fishing licenses and college scholarships have in common?

They're all part of dozens of innovative freebies being given away for people to get a Covid-19 vaccine, as some states have recently offered big prizes for people to get vaccinated. Now, companies are joining the same effort.

Kroger and CVS Health will begin their get-a-vaccine, win-a-prize campaigns next week.

Kroger Health's giveaway will include five $1 million payouts and 50 chances to win free groceries for a year, according to a statement from the company.

"The faster we reach community immunity, the sooner we can all get back to enjoying backyard barbecues, live music and gathering for special occasions," said Rodney McMullen, Kroger's chairman and CEO.

The new campaign stems from a collaboration with the Biden administration to encourage increased vaccinations as part of the national push to have at least 70 percent of adults in the US vaccinated with at least their first dose by July 10, according to Kroger.

"We greatly appreciate President Joe Biden's leadership and partnership with the private sector to increase vaccinations among the US population, especially people of color and individuals under age 30," McMullen added.

CVS will also start giving away freebies for vaccinations starting June 1. Customers who receive a Covid-19 vaccination through CVS Health may choose to enter the #OneStepCloser sweepstakes. Prizes include free cruises, tropical vacations, a VIP trip to Super Bowl LVI and gift cards for date nights.

Get a vaccine, become a millionaire (maybe)

The incentives appear to be working.

In Ohio, vaccination rates rose by 45% following the announcement of the Vax-a-Million lottery on May 13, according to Governor Mike DeWine. And the group with the largest jump in inoculations were those ages 16 and 17, with a 94% increase in vaccinations in about two weeks' time, DeWine said.

Other states are now following suit.

West Virginia announced the state will begin drawings for an array of prizes that include college scholarships, pickup trucks and cash as a new incentive to get residents vaccinated against Covid-19.

"We're going to do exactly what Ohio has already done, but we're going to make a few West Virginians millionaires before this is over," Governor Jim Justice said.

Minnesota Governor Tim Walz has kicked off the "Your Shot to Summer" vaccination campaign. For those who get vaccinated between Memorial Day weekend and the end of June, 100,000 Minnesotans will be eligible to choose from a range of incentives, including state park passes and fishing licenses as well as state fair and regional amusement park tickets.

Walz said he chose this type of incentive campaign for the federally funded program rather than an Ohio-style lottery, because he feels more people can benefit from the equally distributed prizes.

"In those states, it's all or nothing, somebody might get a million, but there's going to be 100,000 that are getting nothing," the governor said. "Here in Minnesota, everybody's getting something, and these are, these are pretty nice things to have, I think for families to be able to take advantage of."

Arkansas will be giving for those vaccinated $20 lottery scratch-offs or a gift certificate with the Arkansas Game and Fish Commission for $21, which can be redeemed for a fishing license or a hunting/fishing license in the state.

An Arkansas lottery official said there are two $1 million prizes remaining to be won and over $19 million in total cash prizes.

New York and Delaware are going the educational route.

New York Governor Andrew Cuomo announced the state is offering the chance at full four-year scholarships to any New York public college or university to people aged 12 to 17 who elect to get their first Covid-19 vaccine through July 7th.

A weekly raffle will be held to offer 50 scholarships to cover full tuition and room and board. According to Cuomo, those ages 12 to 17 in New York comprise about 10% of the state's positive Covid-19 tests yet are currently the part of the eligible population least likely to be vaccinated.

And Delawareans will be entered to win $5,000 in cash and additional prizes in twice-weekly drawings conducted by the Delaware Lottery, according to state officials.

"Other prizes include a four-day vacation, a full scholarship to a public Delaware university, annual Delaware State Parks passes, tickets and camping at Firefly Music Festival, and prize packages from partners including Funland, the Wilmington Blue Rocks and the Delmarva Shorebirds," according to Governor John Carney's office.

California is going all in on their giveaway scheme touting their incentive program as "the biggest in the entire country," according to state officials.

The state is enticing residents with an announced $116.5 million in incentives, including a $15 million grand prize to be split among ten Californians who have been vaccinated against Covid-19.

Already, about 50% of eligible Californians are fully vaccinated and another 12% have received one dose of the Covid-19 vaccine, according to state officials.