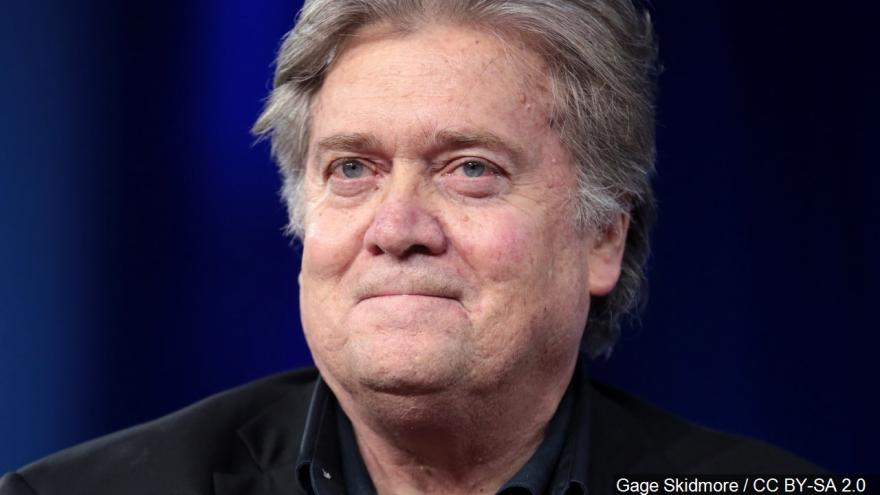 Steve Bannon and three others were charged with fraud in a border wall fundraising campaign. Seen here, the former White House senior counselor to President Donald Trump leaves the courthouse after he testified at the Roger Stone trial November 8, 2019 in Washington, DC.

During an initial court appearance in New York later Thursday, Bannon pleaded not guilty and was set to be released on bail including a $5 million bond to be secured by $1.75 million in cash or real property. As part of his bail conditions, he will be prohibited from travel on private airplanes, yachts or boats without permission from the court.

Appearing via video conference, Bannon sported a white face mask, a button-down shirt and a sunburn.

As he exited the federal courthouse, Bannon removed his mask and waved at supporters before confronting a group of reporters.

"This entire fiasco is to stop people who want to build the wall," Bannon said.

The four men were indicted for allegedly using hundreds of thousands of dollars donated to an online crowdfunding campaign called We Build the Wall for personal expenses, among other things. Bannon and another defendant, Brian Kolfage, promised donors that the campaign, which ultimately raised more than $25 million, was "a volunteer organization" and that "100% of the funds raised...will be used in the execution of our mission and purpose," according to the indictment unsealed Thursday.

But instead, according to prosecutors, Bannon, through a non-profit under his control, used more than $1 million from We Build the Wall to "secretly" pay Kolfage and cover hundreds of thousands of dollars in Bannon's personal expenses.

Kolfage, according to the charges, spent more than $350,000 of the donations on personal expenses, including cosmetic surgery, a luxury SUV, a golf cart, payments toward a boat, home renovations, jewelry, personal tax payments and credit card debt.

"As alleged, the defendants defrauded hundreds of thousands of donors, capitalizing on their interest in funding a border wall to raise millions of dollars, under the false pretense that all of that money would be spent on construction," Acting Manhattan US Attorney Audrey Strauss said in a statement. "While repeatedly assuring donors that Brian Kolfage, the founder and public face of We Build the Wall, would not be paid a cent, the defendants secretly schemed to pass hundreds of thousands of dollars to Kolfage, which he used to fund his lavish lifestyle."

The indictment describes a sleight-of-hand perpetrated by the defendants on donors to the We Build the Wall group. Within days of launching the group, Kolfage, along with Bannon and Badolato, made a "secret agreement" in which Kolfage would be paid "$100k upfront [and] then 20 [per] month," according to the indictment. To disguise the transfer of the money to Kolfage, Bannon agreed to pass the payments through the non-profit he controlled, according to prosecutors, and in February 2019, Bannon and Badolato directed the non-profit to pay Kolfage $100,000 from We Build the Wall.

Speaking at the White House in the hours after Bannon's arrest, Trump said he felt "very badly."

"Well I feel very badly. I haven't been dealing with him for a long period of time," Trump said, noting that he was "involved in our campaign" and "for a small part of the administration very early on." Bannon served in the Trump administration from the inauguration through August 2017.

As for the border wall fundraising project, Trump claimed he knew "nothing" about it and did not know the people involved with it, even though other key allies are on its board.

"I know nothing about the project other than I didn't like when I read about it. I didn't like it. I said this is for government, this isn't for private people, and it sounded to me like showboating and I think I let my opinion be very strongly stated at the time: I didn't like it, it was showboating and maybe looking for funds, but you'll have to see what happens. I think it's a very sad thing for Mr. Bannon," he said.

In February, CNN reported that We Build the Wall had communicated with the administration on plans to build a wall along the southern border and donate it to the US government.

Prosecutors appear to have reviewed text messages between Bannon, Badolato and others that show the $100,000 was intended as salary for Kolfage, and that in each of the following two months, Bannon paid Kolfage another $20,000 in monthly salary "consistent with the secret deal Bannon had approved."

When Kolfage texted Badolato to say the We Build the Wall group would have to disclose payments to the non-profit in its tax filings, according to the indictment, Badolato replied, "better than you or me lol."

After Kolfage told Badolato to make the payments to Kolfage's spouse, the non-profit filed a tax form falsely saying it had paid his spouse for "media," according to court filings.

In subsequent months, Kolfage's "secret monthly salary" was allegedly passed through other third-party entities that prosecutors described as purported vendors for We Build the Wall, and eventually through a new shell entity created by Shea to "conceal the source and nature of the payments," which Kolfage told Shea they could describe as for "social media."

In October 2019, however, Kolfage, Bannon and Badolato began taking steps to conceal their behavior after learning from a financial institution that We Build the Wall might be under federal criminal investigation, according to the indictment.

At that point, Kolfage and Bannon began using encrypted messaging applications on their phones, Kolfage stopped receiving secret salary payments and a statement on the group's website that said he wasn't receiving compensation disappeared, according to the indictment. Instead, the website subsequently read that he would be paid a salary beginning in January 2020.

According to a law enforcement official, officials at Justice Department headquarters were briefed in advance of the indictment of Bannon and others, but this person didn't indicate when that briefing occurred.

Attorney General William Barr's abrupt removal of then-Manhattan US Attorney Geoffrey Berman in June drew scrutiny of Barr's relationship with the New York prosecutors' office, but department officials have said the firing wasn't related to the handling of any particular case.

Bannon was once an influential voice inside the White House as Trump's chief strategist, until he was ousted by the President in August 2017.

Furious from an interview in which Bannon was quoted contradicting Trump on North Korea and claiming he had authority to make personnel changes at the State Department, Trump fired Bannon.

He and the President had a falling-out in 2018 after Bannon was quoted calling an infamous 2016 meeting of a Russian lawyer, Donald Trump Jr., then-campaign chairman Paul Manafort and the President's son-in-law Jared Kushner "treasonous."

Before joining Trump's campaign, Bannon was the former executive chairman of Breitbart, a right-wing news site that traffics in incendiary headlines, many of them outwardly racist, misogynist, anti-Semitic. Bannon returned to Breitbart after leaving the White House, but left again in 2018.

We Build the Wall controversy

We Build the Wall Inc., a group founded by Air Force veteran Kolfage, gained national attention after raising millions of dollars in a GoFundMe campaign, and launching two private wall projects in New Mexico and Texas. Those projects were constructed on private land -- a strategy that largely shielded them from government intervention.

Kolfage has come under scrutiny for his inflammatory rhetoric and promises. In the past, he's been accused by some of his donors as overpromising and underdelivering. Other allegations against him include being clandestine in his operations and unwilling to disclose certain logistics. He often uses his Twitter account to spar with or confront liberal critics. In the past, Kolfage has defended himself against criticism.

He previously told CNN that his group is a "game-changer for border security" and is "trying to make America safer."

As of October 2019, the group said it raised roughly $18.5 million in direct donations, with an additional $6 million in pledged donations dependent on meeting "certain milestones," according to its website. The group said it had more than 500,000 donors.

We Build the Wall has been the subject of an ongoing federal lawsuit brought by the North American Butterfly Association, which oversees a 100-acre wild butterfly habitat near the private wall's Texas location, along the banks of the Rio Grande.

"WE TOLD YOU SO!!!" tweeted the National Butterfly Center in part on Thursday, accusing Bannon of a "scheme to raise dark money" for the administration.

"We are happy the Justice Department is moving quick on this to stop people like this from profiting off hate and divide," Javier Peña, a lawyer for the center, told CNN.

The center's lawsuit alleges that the private wall effort could cause permanent damage to neighboring properties by changing the flow of surface water.

As a part of the litigation, the center documented erosion at the base of the private wall in the aftermath of Hurricane Hanna in July. Photos of the wall, viewed by CNN, show cracks in the ground between the wall and the river.