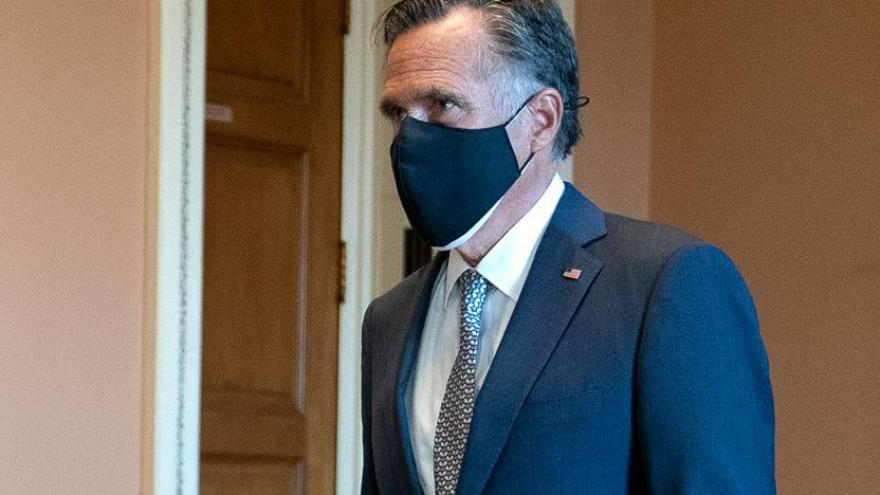 (CNN) -- What a difference a week makes.

On Monday, it looked like nothing was going to happen on stimulus. Now, it's possible a deal is brokered in a matter of days.

It's crunch time. If a bipartisan group of lawmakers is actually going to unlock a stimulus agreement and present it in writing by Monday, there is a lot of work left to do.

You saw an avalanche of positive comments coming from Republican senators on Thursday. They were open to this pathway, and that's because it's really the only option on the table right now that could become law

"I've never been more hopeful that we'll get a bill," said Sen. Lindsey Graham, a Republican from South Carolina.

This could change if negotiations break down and leadership gets involved to hash out a smaller deal that simply extends expiring provisions. But Republican members know that their GOP proposal can't earn Democratic support. So, if you are a member who wants an outcome, the best strategy is to try to engage on this proposal. That's what you are seeing right now.

There's a ton of hope, but there still isn't a bill.

Aides familiar with the process tell me that members are working around the clock and have broken into teams to hammer out specific sections of the bill. Democratic Sen. Whip Dick Durbin of Illinois and Republican Sen. John Cornyn of Texas are quietly working on a compromise for the liability insurance section.

Utah Republican Sen. Mitt Romney and Democratic Sen. Joe Manchin of West Virginia are working on a formula that could work for state and local governments, including possibly setting a cap at how much any one state could receive. The intention would be to block large states from getting as much money as they might have gotten in the last round based on the old formula.

Some members are leaning on committee staff with expertise on provisions around the Paycheck Protection Program. Graham is working President Donald Trump to get him to back it. And, yes, leadership is being regularly briefed on where these talks are going.

There's a lot happening. The question is whether it can happen fast enough.

Senate Majority Leader Mitch McConnell has made it clear, according to multiple aides involved, that he'd like to see a proposal Monday. That's what Manchin has said publicly, too.

It's going to get quiet for a bit. That's how you know folks are actually working.

What do we know so far?

Stimulus checks. The reason? You've seen so many Republicans want to get to "yes" on this legislation because the price tag is less than $1 trillion and much of that money is offset by reusing money that didn't get used in the last stimulus bill. There are many details that have to be worked out to ultimately get Republicans to vote for the proposal, but keeping the price tag below $1 trillion has been essential.

Right now, it doesn't look possible to include $1,200 stimulus checks for most Americans once members account for the costs of proposals like the Paycheck Protection Program, state and local funding and the unemployment benefits.

The timing: Members want to get this all wrapped up, from the spending bill to stimulus, vote, and get out of town by the end of next week. That doesn't mean this won't slide, but there is a pandemic all around them, and what is providing momentum right now is a deadline. If this slides, there's concern it could keep sliding, and the longer it takes to put a deal together, the more opportunities there are for it to languish and be picked apart by the dozens of interests downtown that want their provisions to be attached to one of the last remaining bills of this Congress.

Republicans who have signaled an openness to the bipartisan framework

This is not the same as saying they will vote "yes." No one has bill text, but these members have expressed optimism that the framework could provide a path forward. Bold names are part of the bipartisan working group:

Is this the new power squad?

A lot of things can happen at the end of the year. Post-elections, members feel emboldened to step outside of leadership to solve problems. Dynamics shift. Add to all of that a deadly pandemic that has wreaked havoc on the U.S. economy, and folks get motivated.

But, what you are seeing right now is a formula that -- if it works -- could be repeated. House Democrats have a smaller majority next year. No matter what happens in Georgia, that will be true in the Senate as well. When leaders have fewer votes to spare, members in the middle can become powerful forces.

Next year, it will only take a handful of GOP senators to side with President-elect Joe Biden to get his Cabinet through, for example.

I don't want to overstate it: partisanship is always going to have a hold on the Capitol and a Senate majority leader and speaker will always have power over what comes to the floor, but the bipartisan group here is clearly demonstrating that moderates can play a role in the next Congress if they want to.

Omnibus discussions continue with leaders trying to close out remaining sticking points. Senate Appropriations Chairman Dick Shelby of Alabama and House Majority Leader Steny Hoyer of Maryland talked Thursday about a path forward, and aides say that things are progressing. People are in a deal-making mode right now. And appropriators don't want to fail here and have to do a continuing resolution.

Trump still says he's going to veto the National Defense Authorization Act, a critical defense spending bill, because it doesn't include eliminating a provision that gives broad protections to internet companies for the content they publish or third parties publish on their sites.

In a tweet Thursday night, Trump wrote, "it looks like Senator Jim Inhofe will not be putting the Section 230 termination clause into the Defense Bill. So bad for our National Security and Election Integrity. Last chance to ever get it done. I will VETO."

A reminder, the NDAA has overwhelming bipartisan support in Congress.