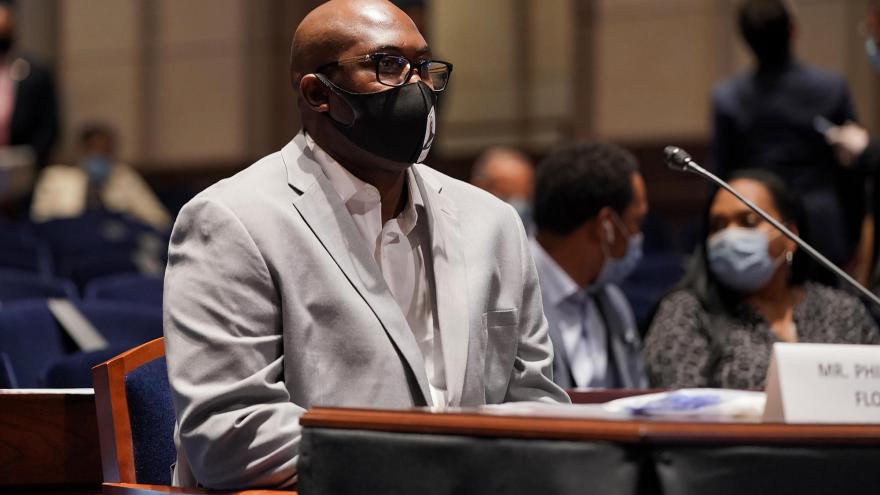 (CNN) -- George Floyd's brother, Philonise Floyd, told House lawmakers on Wednesday that his brother "didn't deserve to die over $20," and called for police accountability and reform, saying, "Make the necessary changes to make law enforcement the solution and not the problem."

Philonise Floyd appeared Wednesday before the House Judiciary Committee for an oversight hearing on policing and law enforcement accountability. The testimony came after George Floyd was killed in Minneapolis police custody in late May, an event that has sparked a national outcry along with sustained protests and civil unrest over the issue of police misconduct and racial injustice, as well as calls for Congress to act.

In the wake of national protests and unrest, House and Senate Democrats have unveiled sweeping police reform legislation, while Senate Republicans are also now working to craft their own reform proposal.

It remains unclear, however, whether there will be enough bipartisan support for anything to pass through both chambers of Congress. The path to any kind of bipartisan compromise is expected to be difficult as well with congressional Republicans already sounding skeptical of a number of proposals that Democrats are pushing.

In his testimony, Floyd's brother referenced the mass protests unfolding across the United States and urged policing reform and accountability.

"George called for help and he was ignored. Please listen to the call I'm making to you now. To the calls of our family and the calls ringing out in the streets across the world," he said.

"Honor them, honor George, and make the necessary changes to make law enforcement the solution and not the problem," he said. "Teach them what necessary force is. Teach them that deadly force should be used rarely and only when life is at risk. George wasn't hurting anyone that day. He didn't deserve to die over $20."

Floyd's brother described him as a caring and compassionate individual and spoke of the deep pain he and his family now have to endure.

"George always made sacrifices for his family. And he made sacrifices for complete strangers. He gave the little that he had to help others. He was our gentle giant," he said. "I was reminded of that when I watched the video of his murder. He called all the officers 'sir.' ... The men who took his life, who suffocated him for eight minutes and 46 seconds. He still called them 'sir' as he begged for his life."

His voice rising, he said, "I'm tired. I'm tired of pain, the pain you feel when you watch something like that. When you watch your big brother who you looked up to for your whole entire life die, die begging for his mom. I'm here to ask you to make it stop. Stop the pain. Stop us from being tired."

House Democrats are now aiming to bring their policing reform package to the House floor for a vote during the week of June 22.

The Democratic package — put together by the Congressional Black Caucus, House Judiciary Committee Democrats and Democratic Sens. Kamala Harris of California and Cory Booker of New Jersey — would ban chokeholds, create a National Police Misconduct Registry, incentivize state and local governments to conduct racial bias training for officers, and set restrictions on the transfer of military-grade equipment to local law enforcement entities, among other provisions.

House Judiciary Chairman Jerry Nadler, a Democrat from New York, spoke in support of the legislation during the hearing, saying that it would "take a holistic approach that includes a variety of front-end reforms to change the culture of law enforcement, while also holding bad police officers accountable to separate them from those with a true ethic to protect and serve."

Rep. Jim Jordan of Ohio, the top Republican on the committee, said during the hearing that "the American people understand that it's time for a real discussion, a real debate, real solutions, about police treatment of African-Americans." He added that Americans also understand that "the vast majority of law enforcement officers are responsible, hard-working, heroic first responders."

Jordan added that Americans also understand "it is pure insanity to defund the police," referencing a cry that some activists have embraced, but that top congressional Democrats have not endorsed as they push reforms.

A number of other witnesses also testified during Wednesday's hearing. Those witnesses included Vanita Gupta, president and CEO of the Leadership Conference on Civil & Human Rights, Sherrilyn Ifill, the president and Director-Counsel of the NAACP Legal Defense and Educational Fund, and Chief Art Acevedo, the president of the Major Cities Chiefs Association and the chief of police for the Houston Police Department.

Derek Chauvin, J. Alexander Kueng, Thomas Lane and Tou Thao were responding to a call about a $20 counterfeit bill on May 25 when they detained George Floyd. Chauvin pressed his knee into Floyd's neck for nearly nine minutes. The four officers were fired and are now facing charges in Floyd's death.

Floyd's brother Philonise grew emotional and appeared to cry as he discussed his brother's death. He spoke about how the video of it will continue to haunt him and called for the officers involved to be convicted, saying that "justice has to be served."

"It hurt seeing my brother plead for his life, watching that officer just put his knee on his neck," he said. "He pleaded for his life. He said he couldn't breathe. Nobody cared, nobody. People pleaded for him, they still didn't care. Justice has to be served. Those officers they have to be convicted. Anybody with a heart they know that's wrong. You don't do that to a human being. You don't even do that to an animal. His life mattered. All our lives matter. Black lives matter."

His voice breaking, Floyd's brother told the committee that he didn't get a chance to say goodbye to his brother, adding "I was robbed of that, but I know he's looking down at us now."

Another emotional moment during the hearing came when Democratic Rep. Lucy McBath of Georgia, whose son was fatally shot in 2012, addressed Floyd's brother, saying, "I know exactly how you feel. I know your pain. I can't sit here and say I can only imagine. I know what you are going through."

"I grieve every day for these continued losses. I grieve as a mother who lost her own child to the very same violence we're talking about today," she said, adding, "I lost my son, Jordan, by a man who called him a thug for simply playing loud music in his car."

There is a difficult path ahead in any effort to reach a bipartisan deal on policing reform with congressional Republicans expressing skepticism over Democratic proposals.

Senate Judiciary Chairman Lindsey Graham on Wednesday rejected Democratic calls to pass legislation to ban certain police tactics like chokeholds, saying states and localities should be incentivized through federal money to make changes. He also predicted Trump would get behind the Senate GOP bill.

"I think that's sort of not our job up here," Graham said. "I think our job is to say you're not going to get federal assistance. I'm comfortable with that, than to just take over local police departments."

Asked about Democratic calls to ban police tactics like chokeholds, overhaul qualified immunity so it's easier to sue in civil court and create a national database to track police misconduct, GOP Sen. Tim Scott of South Carolina -- who is leading efforts to craft a proposal for Republicans in the Senate -- threw cold water on the ideas, saying, "I don't see how those things get to the finish line."