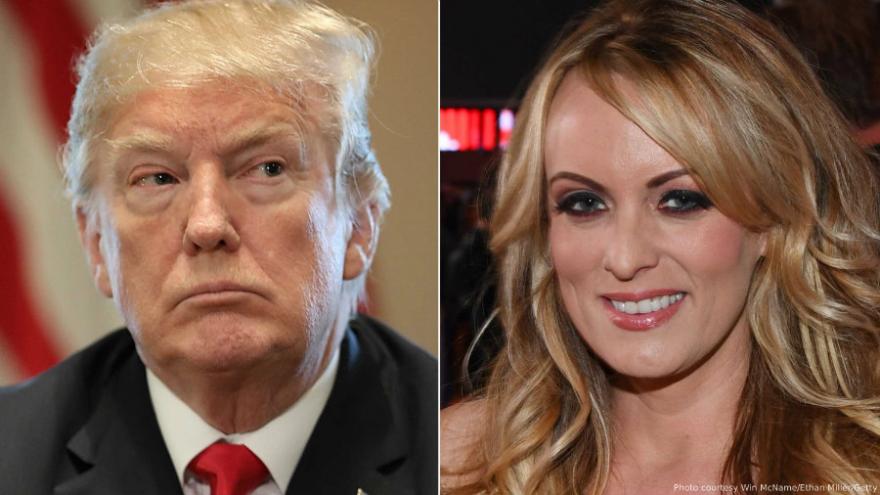 Michael Avenatti made the request in a letter addressed to Treasury Secretary Steve Mnuchin on Monday. A copy of the letter was shared with CNN.

"We believe it is going to undercut the claims of Mr. Cohen relating to the transfer of the money, the flow of the money, and what exactly happened here. But the fact that a (suspicious activity report) was filed in this case is a big deal and it's an indication that the bank sees a problem here," Avenatti told CNN's Wolf Blitzer on Tuesday.

Avenatti wrote in the letter that the $130,000 payment that Cohen made to Daniels is central to her lawsuit against Trump, Cohen and Essential Consultants -- the company that Cohen established in 2016 to facilitate the transaction. A "suspicious activity report," or SAR, was filed by First Republic Bank -- the bank Cohen allegedly used to make the payment -- to the Treasury Department, the Wall Street Journal reported last month.

The details of the $130,000 payment are not only key to Daniels' lawsuit, Avenatti argued, but also of "great public concern" to the country.

"(W)e request that you publicly release the SAR, along with any and all underlying facts, transactions, and documents in your control upon which the SAR is based," Avenatti wrote to Mnuchin. "And as Secretary of the Treasury, it is well within your authority to release the requested SAR information to allow the public to learn critical information relating to the payment."

He added, "Indeed, if the payment was made as innocently as Mr. Cohen has suggested, there should be no objection to the prompt release of the SAR."

The $130,000 payment was wired to the trust account of Daniels' former lawyer, Keith Davidson, at City National Bank in Los Angeles, according to the Wall Street Journal. Avenatti's letter to Mnuchin did not mention City National Bank or request any information related to it.

The letter comes as questions continue to swirl about Cohen's payment to Daniels just days before the 2016 election. Cohen has said that he used personal funds to facilitate the payment. Neither the Trump campaign nor the Trump Organization were involved in -- or ever repaid Cohen for -- the transaction, Cohen said.

"We are highly confident this agreement is going to be tossed out, for a variety of reasons, including the fact, as we've indicated, that Mr. Trump never signed the agreement," Avenatti said on "The Situation Room with Wolf Blitzer."

Advocacy groups and some campaign finance and legal experts have raised concerns that Cohen's effort to quiet an individual making politically unflattering claims about then-presidential candidate Trump may have constituted an illegal in-kind campaign contribution.

Even as the White House continues to deny that Trump had an extramarital affair with Daniels in 2006, Daniels insists that she had a one-time sexual encounter with Trump. She filed a lawsuit last month to void the so-called "hush agreement" she signed in 2016 to keep quiet about the alleged affair. The contract cannot be enforced, Daniels is arguing, because Trump himself never signed it.

As a part of that case, Daniels is also suing Cohen for defamation, saying that he has publicly suggested that she is lying.

Avenatti requested in the letter to Mnuchin that the Treasury secretary release information about the bank transaction by April 11.