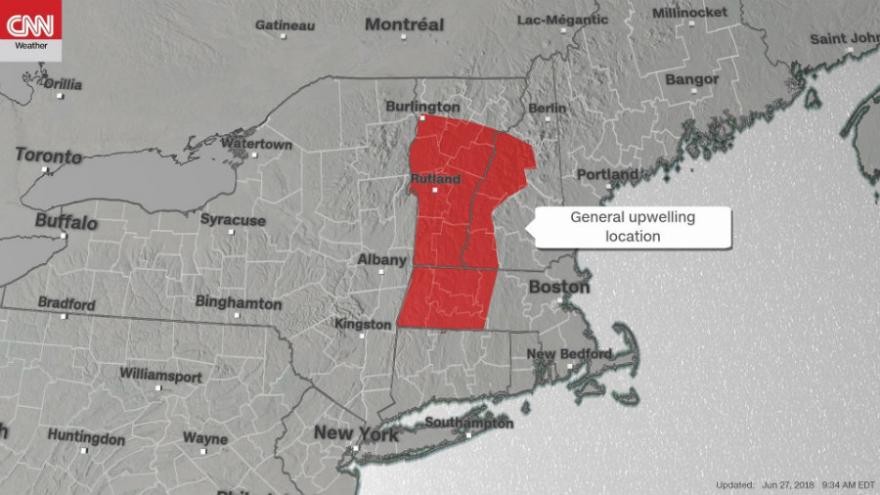 (CNN) -- Earth is constantly evolving and reshaping itself through geological processes.

Sometimes, these processes can be very dramatic: most recently, the picturesque but destructivelava flows from the Kilauea volcano in Hawaii and the deadly blast of the Fuego volcano in Guatemala. Other times, however, Earth's changes occur over millennia and are nearly imperceptible to humans.

In the Northeast United States, geological activity was thought to have been quiet for millions of years. But a discovery by Vadim Levin, a geophysicist at Rutgers University, and his team paints a much more exciting picture.

Could this be a budding volcano growing near some of the most populated regions of the country?

The massive warm rock can be compared to a slow-moving hot air balloon, according to Levin, who compares the process to the movement of a lava lamp. Similar to a rising bubble in the lamp, portions of the area under the Northeast are rising because they are slightly warmer than the surrounding material.

It may sound alarming, but there probably isn't much to worry about.

"There is no reason for anyone living in New England to lose sleep worrying about a volcano all of a sudden appearing in their backyard," according to Tom Murray, director of the US Geological Survey's Volcano Science Center.

Though the study describes the activity as "recent," that is in geological terms, which could mean hundreds of thousands if not millions of years.

As for an eruption, that is highly unlikely, as we are not talking about a molten-lava-spewing super volcano -- nor is it a volcano at all.

"The mantle is 'liquid' only on a geological time scale (millions of years). In my science, it is common to talk about 'mantle flow,' in a mode similar to the 'flow' of a glacier," Levin said.

"On human time scales of minutes, days, years, the rocks of the upper mantle (from 50 kilometers to 2,900 kilometers) in the Earth are perfectly solid."

But the discovery completely alters our understanding of Earth's geology and its history, making us question what is going on deep below the surface.

The discovery was made possible by data generated from the project EarthScope, a high-resolution data-collecting system looking below Earth's surface.

Although scientists have a detailed understanding of how Earth's tectonic plates interact, the region just below, in the upper mantle, remains relatively unobserved.

Levin describes the possibility that these upwellings exist not only in the Northeast but across the United States.

"Images of eastern North America structure at 100 to 200 kilometer depth show at least two more, under Virginia and north Georgia."

These discoveries may be just the tip of the iceberg into understanding the complex geological structure of our planet.

"I will be interested to see if the new techniques and data used by the authors to produce this analysis will reveal similar areas in the upper mantle in other unexpected locations around the US," Murray said.