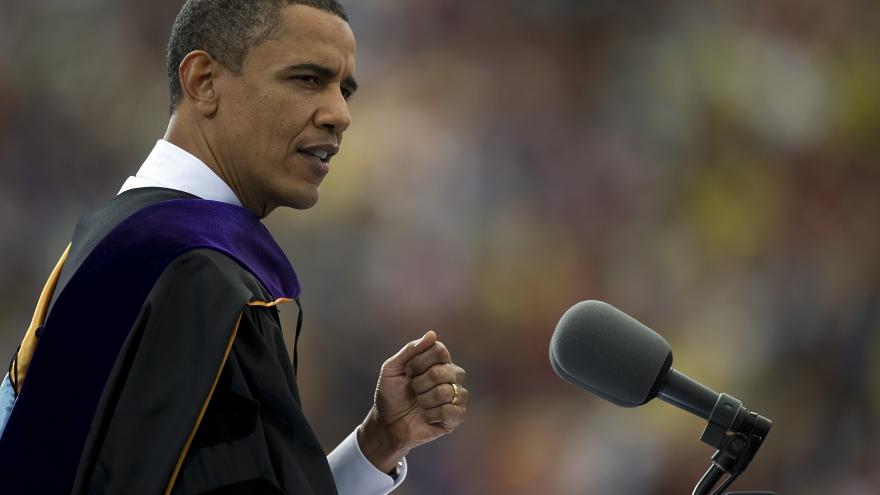 (CNN) -- A high school senior is hoping for a unique commencement address for the Class of 2020 in the age of coronavirus -- one delivered virtually by former President Barack Obama.

Lincoln Debenham,17, a graduating senior from Eagle Rock High School in Los Angeles, tweeted late Tuesday urging Obama to deliver a "national commencement address" digitally to replace schools' canceled ceremonies as much of the nation hunkers down at home.

"Like most high school/college seniors, I'm saddened by the loss of milestone events, prom & graduation. In an unprecedented time, it would give us great comfort to hear your voice. We ask you to consider giving a national commencement speech to the class of 2020," Debenham said in his tweet, which had nearly 95,000 likes and more than 20,000 retweets as of Wednesday evening.

Katie Hill, spokeswoman for Obama, said they were aware of the tweets and "very flattered" but declined to comment further.

Debenham told CNN that he put out the call after hearing that Obama had endorsed his vice president, Joe Biden, on Tuesday for the Democratic presidential nomination.

With the help of his older brother Eli, the two came up with a tweet that they felt conveyed the right message to ask Obama to participate in virtual graduation rites.

"We all at some point felt bad about feeling bad about" missing graduation, Debenham said. "People are dying, people are getting really sick, losing their jobs. I think a lot of us realized it's OK to feel bad as long as you don't minimize the struggles of others."

Debenham said Obama is an icon to his generation and 2020's graduating class.

"They got to vote for Barack Obama in mock elections when they were little kids and they got to watch Barack Obama become the first black president and get sworn in while they were in school," Debenham said. "I remember watching that in the classroom and feeling kind of amazed at such a young age and feel like I was a part of history."

He said he is working on registering to vote.

Obama gave several commencement addresses while he was president, but none have been delivered since he left office.

"It's about someone who speaks for my generation," Debenham tweeted, responding to somebody who remarked on a potential reaction from President Donald Trump. "That's what this is about. Hearing that voice of hope again."