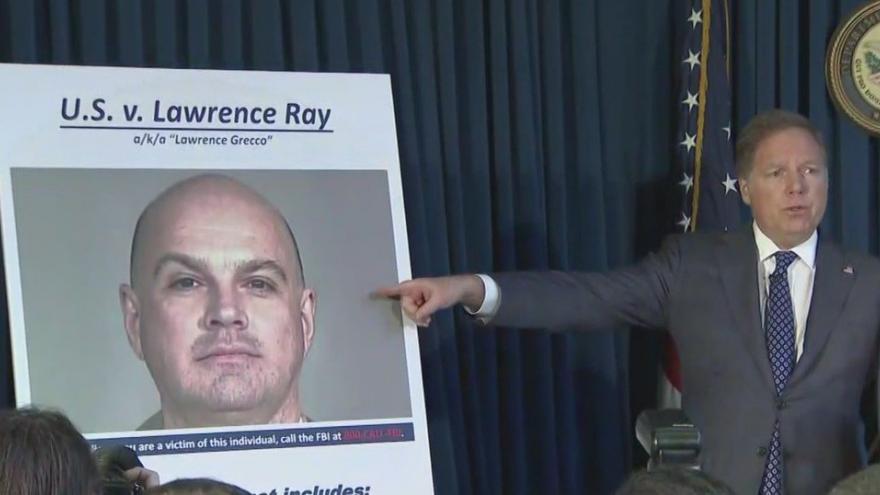 (CNN) -- The father of a former Sarah Lawrence College student allegedly extorted and abused several students from the prestigious university and forced at least one student into prostitution over the past decade, federal prosecutors said.

Lawrence Ray "exploited and abused young women and men emotionally, physically and sexually for his own financial gain," ultimately extorting approximately $1 million from five victims, Geoffrey Berman, the US attorney for the Southern District of New York, said Tuesday.

Prosecutors said the investigation was prompted by an April 2019 magazine article, an apparent reference to an article titled "The Stolen Kids of Sarah Lawrence," published on New York magazine's The Cut. The private liberal arts college has about 1,700 students and is located in Yonkers, New York.

Ray allegedly ensnared many of his victims while they were teenagers, Berman said, and his alleged initial victims were his daughter's college roommates.

He moved into on-campus housing with his daughter and her roommates during their sophomore year in late 2010 and began "therapy" sessions with some roommates in which he presented himself as a father figure who could solve their psychological problems, the indictment states.

In the summer of 2011, several of the roommates lived with Ray at his Manhattan apartment, where he worked to gain their trust and alienate them from their parents, the indictment says.

He then allegedly compelled them to make substantial payments to him and directed them to obtain money for him by draining their parents' savings, opening credit lines, soliciting contributions from acquaintances, selling real estate ownership, and performing forced labor and even prostitution, Berman said.

In one particular instance, he allegedly used fear, violence and coercion to force one victim to engage in commercial sex acts to repay debts she didn't actually owe, Berman said. That victim allegedly was forced to work as a prostitute for more than four years, and Ray allegedly collected more than $500,000 from her, Berman said.

Berman said Ray allegedly "sexually groomed" that victim beginning when she was a college student, collecting sexually explicit photos and other personal information he then used to coerce her into engaging in commercial sex acts.

He also used violence; in one instance, he tied the woman to a chair, placed a bag over her head and nearly suffocated her, prosecutors said.

In 2013, Ray forced some of the victims to do manual labor at a family member's home in Pinehurst, North Carolina, to pay off these fictional debts, the indictment says.

When Ray was arrested Tuesday morning in Piscataway, New Jersey, one of his daughter's roommates and another female victim were in the residence, Berman said.

Ray pleaded not guilty to multiple charges against him during his arraignment Wednesday in a federal court in Manhattan.

Prosecutors told the judge they executed a search warrant Tuesday at a storage facility associated with Ray. Authorities recovered journals and electronic devices that Ray would allegedly have victims take sexually explicit photos and video on. He would then use that to extort them, prosecutors said.

Assistant US Attorney Danielle Sassoon said her team has issued more than 100 subpoenas for evidence ranging from email accounts to financial information, and "Backpage" prostitution ads. Authorities have interviewed 17 witnesses and obtained IRS records that show that Ray did not pay taxes during the period of his alleged criminal conduct, Sassoon said.

Ray is currently being represented by federal public defenders. His attorneys declined to comment Wednesday.

Sarah Lawrence College spokeswoman Patricia Pasquale confirmed that Ray is the parent of a former student.

"The charges contained in the indictment are serious, wide-ranging, disturbing, and upsetting. As always the safety and well-being of our students and alumni is a priority for the College," Pasquale said.

"In April 2019, New York Magazine published a range of accusations about this former parent. At that time, the College undertook an internal investigation regarding the specific activities alleged in the article to have occurred on our campus in 2011; the investigation did not substantiate those specific claims."

The indictment did not detail which, if any, of the alleged criminal activity occurred on campus, claiming only that the activity began in 2011.

Sarah Lawrence President Cristle Collins Judd said Wednesday the criminal activity alleged in the indictment "are not alleged to have taken place" on the campus.

But unlike The Cut, which reported that Ray continued to live on campus during the spring of 2011, neither the university nor the indictment specifies whether Lawrence Ray remained on campus for any part of 2011.

Thursday, following the school's statement, a spokesman for the prosecutors declined to comment when asked by CNN whether any of the alleged crimes occurred on Sarah Lawrence's campus.

Ray's stay at the on-campus apartment was a "clear violation" of the college's policy, Judd said, and school officials at the time didn't know that he was living there. No one reported him to school authorities at the time, and the apartment, a townhouse, had its own entrance.

"The potential reasons cited above are not offered as a justification or as an effort to place blame, but rather as potential answers to the troubling question with which I have been wrestling," Judd wrote.

Pasquale said the college has not been contacted by the Southern District of New York but will cooperate in the investigation.