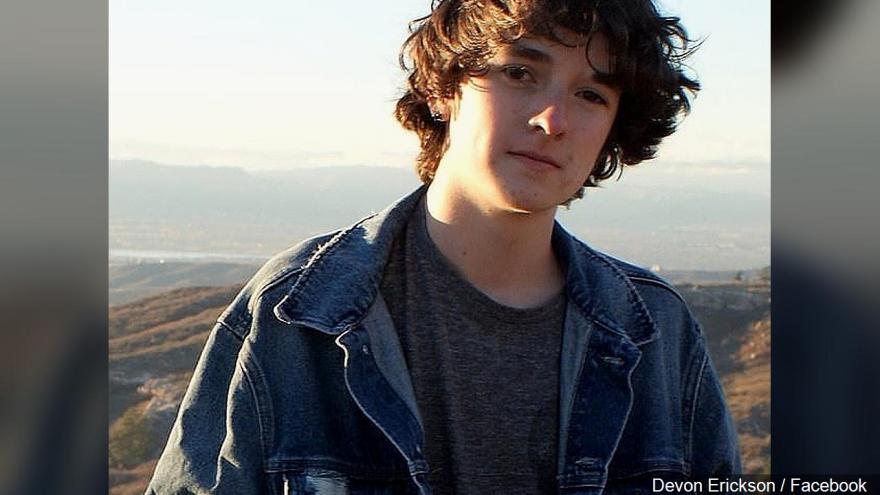 Devon Erickson, 18, has been identified as one of the two suspects who allegedly opened fire on STEM School Highlands Ranch in Colorado

The charges were filed on the same day a memorial service was scheduled for Kendrick Castillo, the 18-year-old student who was killed while trying to stop the May 7 attack at the STEM School Highlands Ranch, which is not far from the scene of the 1999 Columbine massacre.

While court documents are sealed, the names of charges against the gunmen were listed in electronic court records without any more details. It was not clear if McKinney was being charged as an adult.

Erickson looked toward the judge while attorneys discussed the case. He wore a jail uniform and was kept shackled at his wrists and ankles after Judge Theresa Slade denied a motion to remove them.

McKinney was scheduled to appear in court after Erickson.

The judge denied the prosecution's request to make some of the documents public but said she would address the issue at the next hearing on June 7.

Meanwhile, the celebration of Kendrick Castillo's life was to be held at Cherry Hills Community Church in Highlands Ranch. The senior was just days from graduating when he was killed.

Castillo and classmates Brendan Bialy and Joshua Jones were credited with helping minimize the bloodshed by charging at one of the suspects in a classroom.

According to Bialy, Castillo sprang into action against the shooter "and immediately was on top of him with complete disregard for his own safety." Jones said he was shot twice in the leg. Bialy said he was able to take the attacker's weapon.

All the injured students have been released from hospitals.