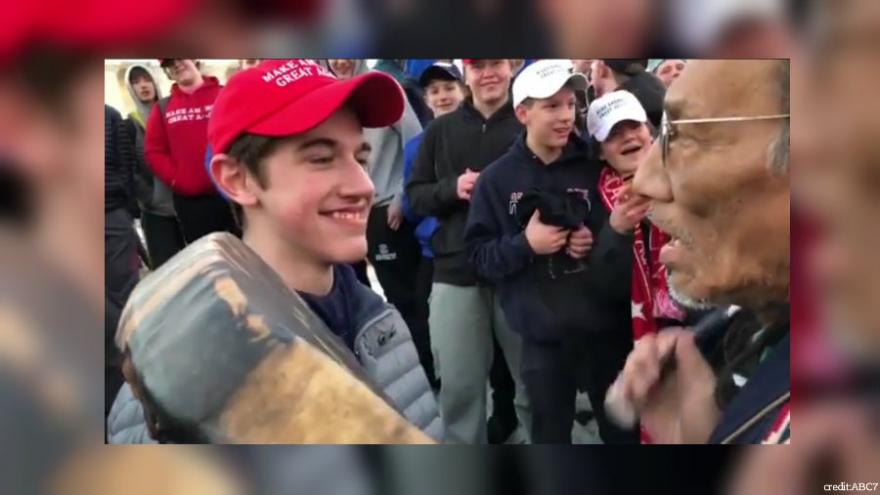 FRANKFORT, Ky. (AP) — A diocese in Kentucky apologized Saturday after videos emerged showing students from a Catholic boys' high school mocking Native Americans outside the Lincoln Memorial after a rally in Washington.

The Indigenous Peoples March in Washington on Friday coincided with the March for Life, which drew thousands of anti-abortion protesters, including a group from Covington Catholic High School in Park Hills.

Other students, some wearing Covington clothing and many wearing "Make America Great Again" hats and sweatshirts, surrounded them, chanting, laughing and jeering.

In a joint statement , the Roman Catholic Diocese of Covington and Covington Catholic High School apologized to Phillips. Officials said they are investigating and will take "appropriate action, up to and including expulsion."

"We extend our deepest apologies to Mr. Phillips," the statement read. "This behavior is opposed to the Church's teachings on the dignity and respect of the human person."

According to the "Indian Country Today" website, Phillips is an Omaha elder and Vietnam veteran who holds an annual ceremony honoring Native American veterans at Arlington National Cemetery.

"When I was there singing, I heard them saying 'Build that wall, build that wall,'" Phillips said, as he wiped away tears in a videoposted on Instagram. "This is indigenous lands. We're not supposed to have walls here. We never did."

He told The Washington Post that while he was drumming, he thought about his wife, Shoshana, who died of bone marrow cancer nearly four years ago, and the threats that indigenous communities around the world are facing.

"I felt like the spirit was talking through me," Phillips told the newspaper.

State Rep. Ruth Buffalo, a North Dakota state lawmaker and member of the Mandan, Hidatsa and Arikara Nation, said she was saddened to see students showing disrespect to an elder who is also a U.S. military veteran at what was supposed to be a celebration of all cultures.

"The behavior shown in that video is just a snapshot of what indigenous people have faced and are continuing to face," Buffalo said.

She said she hoped it would lead to some kind of meeting with the students to provide education on issues facing Native Americans.

The videos prompted a torrent of outrage online. Actress and activist Alyssa Milano tweeted that the footage "brought me to tears," while actor Chris Evans tweeted that the students' actions were "appalling" and "shameful."

U.S. Rep. Deb Haaland, D-New Mexico, who is a member of the Pueblo of Laguna and had been at the rally earlier in the day, used Twitter to sharply criticize what she called a "heartbreaking" display of "blatant hate, disrespect, and intolerance."

Haaland, who is also Catholic, told The Associated Press she was particularly saddened to see the boys mocking an elder, who is revered in Native American culture. She placed some of the blame on President Donald Trump, who has used Indian names like Pocahontas as an insult.

"It is sad that we have a president who uses Native American women's names as racial slurs and that's an example that these kids are clearly following considering the fact that they had their 'Make America Great Again' hats on," Haaland said. "He's really brought out the worst in people."