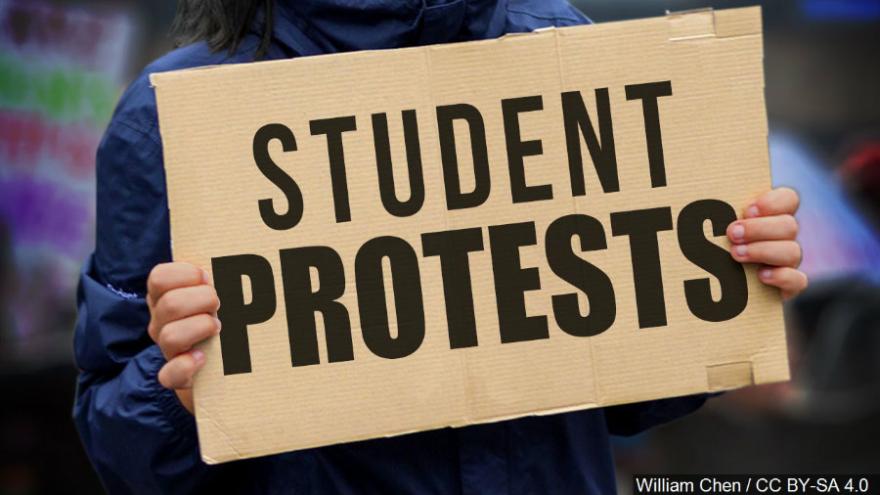 LOUISVILLE, Ky. (AP) — A Kentucky high school valedictorian used a bullhorn to give his graduation speech about the power of students to change the world after a Catholic diocese said he couldn't make the speech during commencement.

Student council president Katherine Frantz also gave her speech by bullhorn after the diocese nixed it.

Diocese of Covington spokesman Tim Fitzgerald told news outlets the speeches were not submitted on time, and upon review "were political and inconsistent with the teaching of the Catholic Church."

Bales opened his speech by praising the campaign for stronger gun laws by students at a Florida high school where 17 people were fatally shot in February. He said the student at Florida's Marjory Stoneman Douglas High School are advocating for "our rights to feel secure as humans."

Bales declared that young people are "finished being complacent" and have a voice in shaping the world.

"There's a misguided notion that wisdom is directly proportional to age, but we're disproving that daily," he said. "Sometimes the wisest are the youngest in our lives, the ones who haven't yet been desensitized to the atrocities of our world. Therefore, we young people must be the educators. The young people must be willing to speak candidly about issues, and we mustn't tremble in the face of the institutions that try to silence us."

Bales is gay but made no mention of it in his speech. But he said he has faced opposition "in a number of scenarios, but my voice continued to grow in intensity as I faced more adversity. Rather than allowing opposition to silence us, we must utilize it as empowerment."

Bales' mother, Gillian Marksberry, said Tuesday that the attempt to silence her son at graduation had backfired.

"They made his voice louder, is what I say," she said in a phone interview. "That's the irony of it."

"This is just bigger than we ever imagined it would ever become," his mother said. "And it's wonderful. Especially the amount of support that's being received is just remarkable."

Bales will attend the University of Louisville.