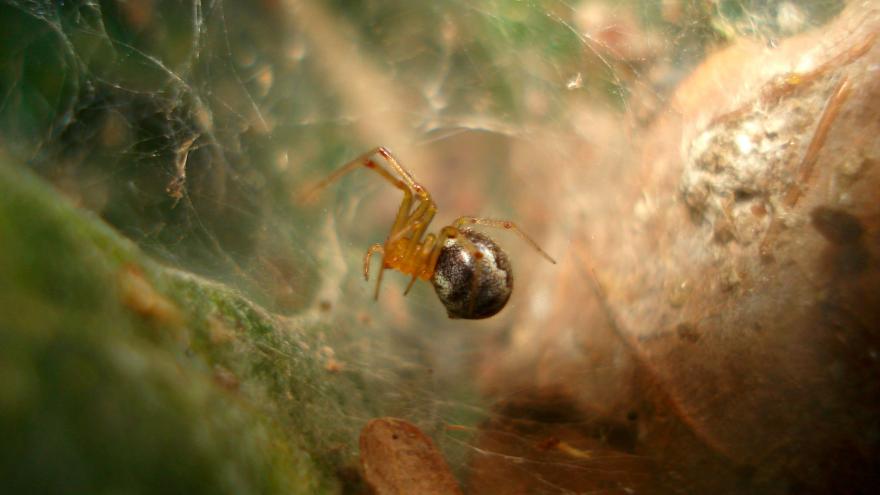 The Anelosimus studiosus spider lives in storm-prone areas along the Gulf and Atlantic coasts of the United States and Mexico. Source: Thomas Jones (Handout)
By Ashley Strickland, CNN

(CNN) -- In regions of the United States and Mexico that are prone to hurricanes, aggressive spiders are evolving to survive and ride out the storm.

When hurricanes rage along the Gulf of Mexico or charge up the East Coast, they can reshape an entire habitat in a short time. The winds destroy trees and spread debris for miles, putting new pressure on the creatures living in these environments.

But how do creatures adapt when their habitats are so disturbed? Researchers looked at Anelosimus studiosus spiders that live in storm-prone areas along the coast to see how they changed. Their study was published Monday in the journal Nature Ecology and Evolution.

These weather systems are called "black swan events": a surprising event with a major impact that is explained with the benefit of hindsight. They don't offer much lead time, so the researchers had to scramble to study the spider colonies before and after projected storms.

The team monitored Subtropical Storm Alberto and Hurricanes Florence and Michael during the 2018 hurricane season. They tried to anticipate the systems' trajectories and study areas that included 240 female spider colonies, comparing them with areas where spider colonies were unaffected by such storms.

The researchers returned to the sites hit by the storms 48 hours later. About 75% of the colonies survived the initial storm strikes.

"It is tremendously important to understand the environmental impacts of these 'black swan' weather events on evolution and natural selection," said Jonathan Pruitt, lead study author, evolutionary biologist and Canada 150 Chair in McMaster University's Department of Psychology, Neuroscience & Behaviour. "As sea levels rise, the incidence of tropical storms will only increase. Now more than ever we need to contend with what the ecological and evolutionary impacts of these storms will be for non-human animals."

The A. studiosis spider species has two main personality traits that are inherited: docile and aggressive.

Aggressiveness can be determined based on their speed, attackers pursuing prey, cannibalizing male spiders as well as eggs and their vulnerability to the invasion of predatory spiders.

"Tropical cyclones likely impact both of these stressors by altering the numbers of flying prey and increasing sun exposure from a more open canopy layer," Pruitt said. "Aggressiveness is passed down through generations in these colonies, from parent to daughter, and is a major factor in their survival and ability to reproduce."

The researchers determined that after a storm passed, the colonies that aggressively pursued food and resources were able to produce more egg cases. The spiderlings also had a better chance of surviving into early winter.

In areas that weren't hit by storms, docile colonies thrived.

These findings were consistent even as the storms varied in duration, intensity and size. The researchers believe this shows that extreme events can shape animal behaviors. They would like to conduct more long-term studies to learn whether this is the case.