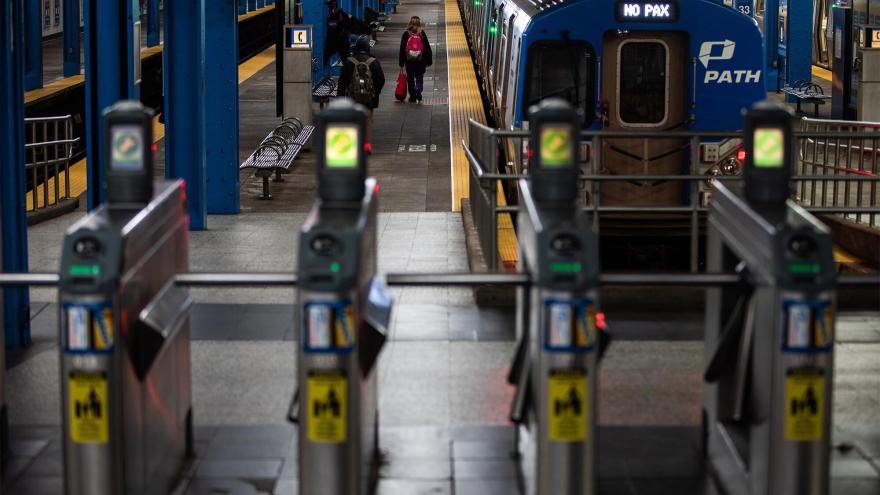 New York's subways are the most polluted in the Northeast -- and one subterranean station has higher levels of particulate pollution than any other station in the world. This image shows a station in the Herald Square area of New York on May 12, 2020.

(CNN) -- In the Big Apple, even mass transit can be a pollution risk.

According to a study published Wednesday in the journal Environmental Health Perspectives, New York's subways are the most polluted in the Northeast -- and one subterranean station has higher levels of particulate pollution than any other station in the world.

The study, conducted by researchers from NYU Langone's Department of Environmental Medicine with assistance from researchers in Connecticut and Alabama, measured particulate matter and carbon pollution during morning and evening rush hour in 71 stations across four metropolitan centers in the Northeast: Boston, Philadelphia, Washington, DC, and New York. The researchers measured pollution on station platforms, in the ambient environment outside the stations, and on trains while riding between stations.

The dirtiest system in the region? According to the study, it is the century-old Port Authority Trans-Hudson lines connecting New York City to northern New Jersey. Researchers found that one station in particular -- the Christopher Street PATH station in Manhattan -- had particulate air pollution "higher than any levels reports for any subway system across the globe."

The median amount of particulate pollution found in PATH stations surveyed in the study is more than double the median amount found at underground stations in Boston, Philadelphia or Washington.

Across all tested systems, the particulate levels measured were two to seven times what the Environmental Protection Agencies' ambient air quality standards recommend over a 24-hour period of exposure.

The New York City subway system, a separate network of trains administered by New York State, came in second place, with rates below that of the PATH system but higher than the count in the three other cities.

"We're obviously concerned," Rick Cotton, the executive director of the Port Authority of New York and New Jersey, which runs the PATH system, said Thursday. "We only received the report yesterday, approximately midday. Our plans are to first of all dig into the report.

The Metropolitan Transit Authority, the state agency that runs New York's subway system, did not respond to requests for comment.

Across all systems, the researchers said, underground stations showed higher amounts of particulate pollution than was found on trains between stations. On-train measurements were higher than those taken at above-ground stations, and all measurements were higher than the ambient level of pollution outside of the transit system.

Researchers wrote that an analysis of the particulate pollution found that across the systems tested, iron accounted for the most common particulate material found in the air, making up more than half of the collected particulates.

They wrote that data "strongly suggests that ambient (particulate matter) is not a likely source" of the pollution in New York's underground stations, and that instead, other sources "such as the continual grinding of the train wheels against the rails, the electricity collecting shoes, and diesel soot emissions from maintenance locomotives are important sources."

The authors were quick to point out that only a few stations were selected in each system, and that those stations were purposely chosen with the expectation that they would have their system's highest level of particulate pollution. The New York MTA system stations were "a biased sample," chosen based on the results of an earlier 2014 study.

"However," they wrote, "our findings clearly indicate that (particulate matter) concentrations in underground stations and measured on subway trains are much greater than above ground (levels), at least during rush hour periods."

"Even if (the data) represent extreme levels for these stations," they continued, "(they) raise serious health concerns and warrant additional investigation."

Speaking Thursday, Port Authority Chairman Kevin O'Toole agreed. "We just got the report, we'll be doing a deep dive the next couple of days," he said. "The health and safety of the workers and employees and the public are of paramount concern."