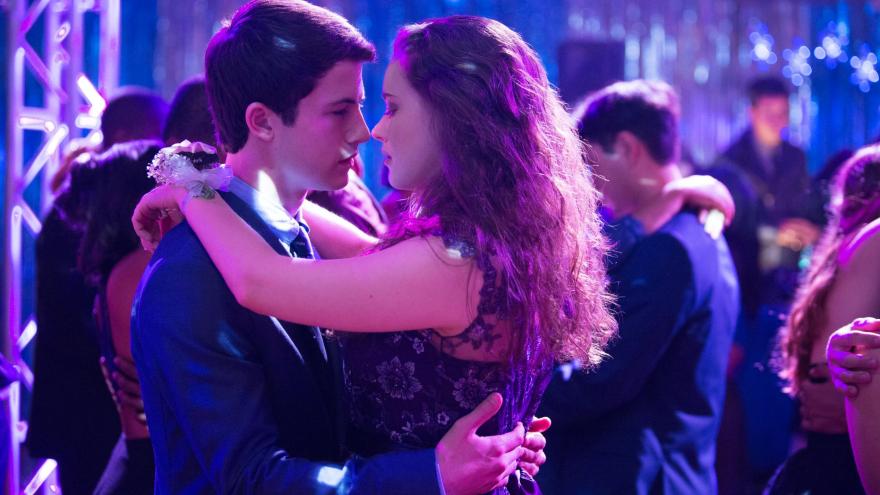 The rate of suicide among US boys ages 10 to 17 surged in the month after the Netflix show \"13 Reasons Why\" premiered in March 2017, according to a new study. Source: Beth Dubber/Netflix

(CNN) -- The rate of suicide among US boys ages 10 to 17 surged in the month after the Netflix show "13 Reasons Why" premiered in March 2017, according to a new study.

Researchers at Nationwide Children's Hospital measured monthly and annual rates of suicide reported to the US Centers for Disease Control and Prevention from 2013 through 2017 among people ages 10 to 64. They then divided them into age groups.

The month immediately following the release of the show had a suicide rate of 0.57 per 100,000 10- to 17-year-olds, the highest rate of the five-year study period in this age group. The nine months after the release saw an extra 195 deaths by suicide in this age group than would have otherwise been expected from seasonal patterns alone, according to the study, published Monday in the Journal of the American Academy of Child and Adolescent Psychiatry.

The increase was primarily driven by boys, whose rate of suicide went up 28.9% in the month after the premiere of the show. Rates remained stable for girls during the same month, even though a teen girl is the show's main character.

"13 Reasons Why" is based on best-selling author Jay Asher's 2007 young adult book of the same title. The series follows the fictional story of a teenage girl named Hannah Baker, portrayed by Katherine Langford, who leaves behind 13 mysterious audio recordings on cassette tapes after killing herself. She addresses each recording to a person who she says played a role in the decision to end her life.

Netflix said in a statement Tuesday, "This is a critically important topic and we have worked hard to ensure that we handle this sensitive issue responsibly."

Suicide is the third leading cause of death for American youth between the ages of 10 and 24, and it results in approximately 4,600 lives lost each year, according to the CDC. Boys are more likely than girls to die from suicide, but girls are more likely to report attempting suicide. The new study did not measure suicide attempts.

"Youth may be particularly susceptible to suicide contagion," said Jeff Bridge, first author of the study, director of the Center for Suicide Prevention and Research at Nationwide Children's and professor of pediatrics, psychiatry and behavioral health at The Ohio State University College of Medicine,in a statement.

Bridge explained that contagion can be "fostered by stories that sensationalize or promote simplistic explanations of suicidal behavior, glorify or romanticize the decedent, present suicide as a means of accomplishing a goal, or offer potential prescriptions of how-to die by suicide."

After the show launched, many schools and school districts sent letters to parents offering caution and guidance for those watching it. Questions were raised about whether the show's creators were doing enough to accurately and responsibly portray suicide, and debate ensued over whether the discussions prompted by the show were helpful or harmful.

Yet swift condemnation from mental health experts continued. In a blog post, John Ackerman, co-author of the new study, wrote at the time that when a suicide occurs, it is almost always in the midst of an intense emotional crisis, and it is unrealistic for a teenager in such a state to construct an elaborate series of recordings.

Ackerman, now a suicide prevention coordinator at the Center for Suicide Prevention and Research at Nationwide Children's Hospital, also criticized the show's portrayal of the common adolescent fantasy "you'll be sorry when I'm gone!" explaining that teens should not be led to believe that something shocking and permanent is the only way to help others understand their pain.

"Portraying suicide as the inevitable outcome of Hannah's victimization was, at best, a missed opportunity and, at worst, dangerous to those vulnerable to suicide," Ackerman wrote.

The authors of that studyconcluded that shows depicting suicide can have both adverse and beneficial effects on teens.

"Parents should be cautious about exposing youth to this series," Ackerman said in a statement. "With a third season of the series expected to air soon, continued surveillance is needed to monitor potential consequences on suicide rates in association with viewing the series."