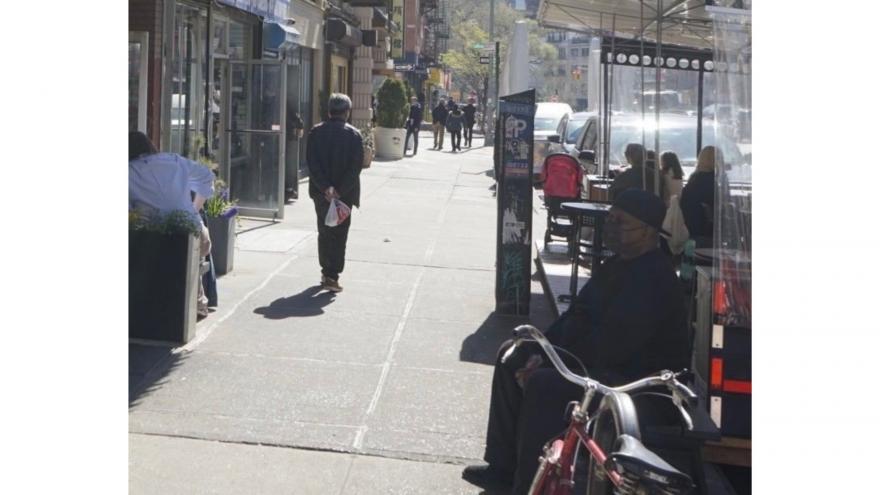 (CNN) -- The man arrested after a roughly 30-hour manhunt in the shooting of 10 people on a subway train in Brooklyn was denied bail at his initial court appearance Thursday.

Frank James, 62, did not enter a plea on charges of violating a law that prohibits terrorist and violent attacks against mass transportation.

In court, Assistant US Attorney Sara Winik described the attack as "premeditated and carefully planned" as prosecutors requested James remain behind bars. Defense attorneys told the federal judge they consented to him remaining in custody for now but may press again for bail later. The lawyers further asked for a psychiatric evaluation to determine James' medical needs.

Wearing a khaki prison uniform and blue surgical mask, James spoke only once, to acknowledge he had seen the complaint. Outside the courthouse, his attorney, Mia Eisner-Grynberg, cautioned against a rush to judgment.

"We are all still learning about what happened on that train," she said. "What we do know is this: Yesterday, Mr. James saw his photograph on the news. He called Crime Stoppers to help. He told them where he was. Initial press and police reports in cases like this one are often inaccurate. Mr. James is entitled to a fair trial, and we will ensure that he receives one."

The court appearance came two days after authorities say James boarded a train, set off two smoke grenades and opened fire on commuters during Tuesday morning rush hour in one of the most violent attacks in the history of New York's subway system.

The shooting left at least 29 people with injuries ranging from gunshot wounds to smoke inhalation. Four people remained hospitalized as of Thursday evening.

Officials have not released a motive for the attack. Still, they did highlight a series of rambling YouTube videos in which James discussed his views on violence, mass shootings and mental health.

In the grievance-filled videos, James, who is Black, said he had post-traumatic stress and espoused his hatred of African Americans and other people he believed had maligned him. In a video posted in February, he criticized a plan by New York Mayor Eric Adams' administration to address safety and homelessness in the subway, saying it was "doomed to fail."

In recent weeks, the videos documented his travel from his home in Milwaukee, Wisconsin, to the Northeast -- which he referred to as the "danger zone."

James had been arrested 12 times previously in New Jersey and New York dating back over 30 years, police said. Yet he had never been convicted of a felony, making him eligible to legally purchase a gun, police said. In recent years he worked for short periods for Amazon and for DoorDash, the companies said.

The suspect, a heavyset Black man wearing an orange reflective jacket, yellow hard hat and surgical mask, set off at least one smoke device and began shooting at people with a Glock pistol, according to a criminal complaint. Witnesses saw the suspect wearing a gas mask, the complaint states.

The gunman fired at least 33 times and struck 10 people, NYPD Chief of Detectives James Essig said. None of the injuries appeared to be life-threatening, officials said.

The smoke created panic as passengers fled to the end of the train, waiting for two minutes until the train arrived at the next station. When it finally made it to the 36th Street station, passengers bolted from the train car and smoke spilled out of the doors, video shows. Others with bloody wounds stumbled to the platform, crying out for medical care.

Authorities found a bag containing a Glock handgun, a plastic container with gasoline, a torch, a U-Haul key and multiple bank cards, as well as another bag containing fireworks, the complaint states.

James bought the gun in Ohio in 2011, the bank cards had James' name on them and the U-Haul key was connected to a van James had rented in Philadelphia, according to the complaint.

Authorities also tracked the purchase of a gas mask to James through an eBay account, two officials said.

In addition, a neon construction jacket, which had been discarded on the subway platform, had a receipt for a storage unit in Philadelphia registered to James, the complaint states.

Federal prosecutors believe he visited the storage facility filled with ammunition and weapons the evening before the attack, according to court documents. A search of the unit revealed additional ammunition and "a threaded 9mm pistol barrel that allows for a silencer or suppressor to be attached."

According to the complaint, law enforcement also executed a search warrant at a Philadelphia apartment authorities believe James rented for 15 days beginning around March 28 and found "an empty magazine for a Glock handgun, a Taser, a high-capacity rifle magazine and a blue smoke canister."

The U-Haul van was recovered by police near the Kings Highway subway station that services the N line. Surveillance video from hours before the shooting shows an individual -- wearing a yellow hard hat, orange working jacket and carrying a backpack and rolling bag -- leaving the U-Haul van, the complaint states.

How he was caught

Less than an hour later, he was spotted boarding the subway at the 7th Avenue and 9th Street station, about 1.5 miles away, said Essig, the NYPD official.

James was initially named a "person of interest" but was declared a suspect after investigators determined he purchased the gun left at the scene. Police launched a manhunt that ended Wednesday afternoon when officers took him into custody in Manhattan's East Village.

"We were able to shrink his world quickly. There was nowhere left for him to run," police Commissioner Keechant Sewell said Wednesday.

Shortly before his arrest, James called Crime Stoppers to turn himself in, two law enforcement sources told CNN. Passersby saw James on the street and flagged down nearby police.

A witness who was installing cameras outside a hardware store and alerted police told CNN he recognized James from police photos.

"I recognized him like right away, but at the same time I feel kind of panic because he was carrying a backpack on his right-hand side. It was heavy," Francisco Puebla said. "When he passed by right next to us, he was just talking bad words, talking himself, and just continued walking right on the street."

Jack Griffin, 17, said he was on a field trip with his high school photography class when he spotted James sitting on a bench on Manhattan's Lower East Side.

Griffin submitted the tip to NYPD's Crime Stoppers around 10:30 a.m. Though James wasn't captured for several more hours, the NYPD later told him the tip helped narrow their net of his whereabouts, he said.

"It's crazy. I was looking for things to shoot, and I found probably one of the most wanted people," he said.

Other cameras in the system that were working served as "essential elements" in helping track down the suspect before and after the shooting, Deputy Commissioner of Intelligence and Counterterrorism John Miller said in a statement.

"Statements that the lack of cameras on the station delayed the manhunt by many hours are unfair and misleading," Miller said.