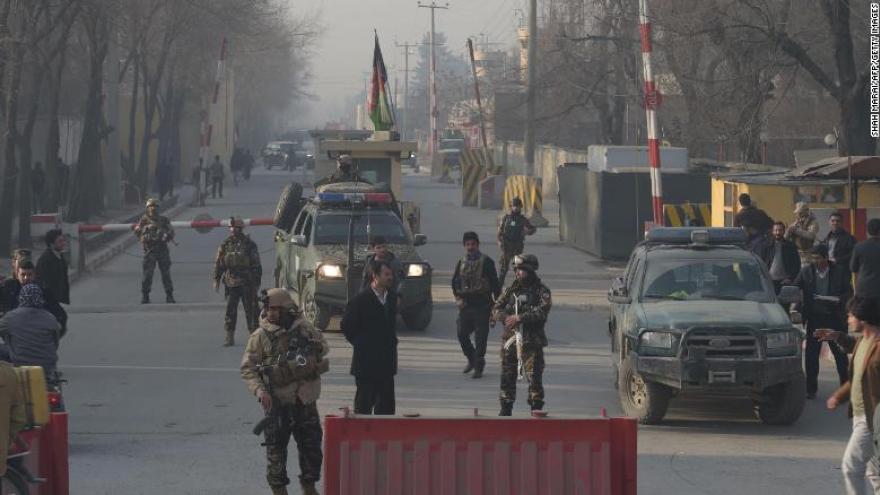 (CNN) -- At least 10 people are dead after a suicide attacker detonated a bomb Monday in the Afghan capital of Kabul, officials told CNN.

ISIS claimed responsibility for the attack.

The attack took place near an office of the National Directorate of Security (NDS) close to Abdulhaq Square, said Nasrat Rahimi, deputy spokesman for the Interior Ministry. He said the attacker was targeting the NDS office.

The NDS office is near the US Embassy, along with several other diplomatic missions.

At least five people were injured, according to Saleem Rasooli, director of Kabul hospitals.

Attacks on both official and unofficial targets are commonplace in Kabul and throughout Afghanistan. Last month, gunmen stormed a television station in the capital, killing a security guard and injuring five others, including four firefighters.

The siege ended after a three-hour standoff with police that left all the attackers dead, Kabul police said.

In October, dozens of Afghans were killed in two mosque attacks, claimed by ISIS, only to be followed the next day by a suicide bombing near a military academy which took another 15 lives.

Also in October, at least 41 soldiers were killed in an attack on their base in eastern Afghanistan.

In September, a suicide bomber killed three people in a blast outside a cricket stadium in Kabul, and the month before ISIS claimed responsibility for an attack on a Shiite mosque in the Afghan capital, which left 20 people dead.