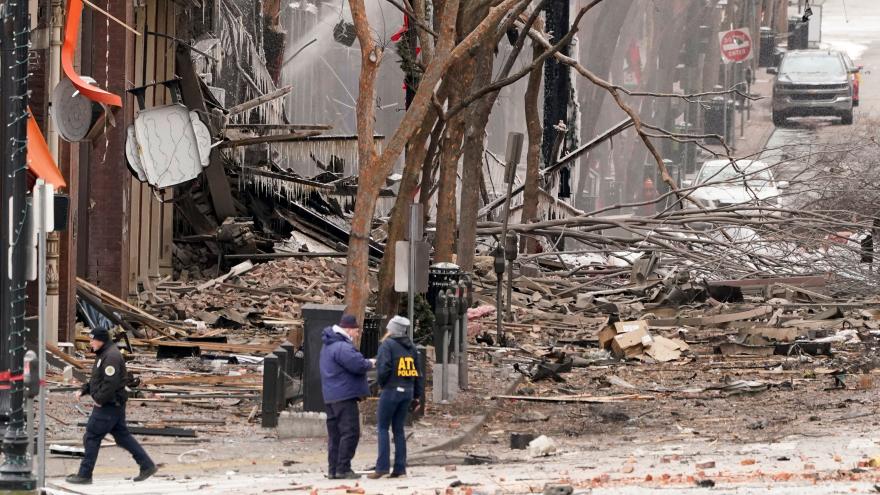 Mark Humphrey/AP-Emergency personnel work near the scene of an explosion in downtown Nashville, TN, Friday, Dec. 25. Buildings shook in the immediate area and beyond after a loud boom was heard early Christmas morning

(CNN) -- Investigators looking into the Christmas morning explosion in Nashville now believe the blast was likely the result of a suicide bombing, according to two law enforcement sources with direct knowledge of the investigation.

Officials have previously said they have recovered human remains at the scene of the bombing in downtown Nashville and an FBI official on Saturday said agents are not looking for another suspect.

Agents are also at a home in Antioch, just southeast of Nashville, to conduct "court-authorized activity," FBI spokesman Jason Pack told CNN. According to a law enforcement official, a tip about the vehicle involved in the explosion on Christmas morning led law enforcement to the Antioch home.

Bomb technicians have cleared the house to ensure it is safe for an evidence team to enter, Pack said. Investigators are now waiting for the evidence team to arrive and enter. Pack would not confirm who lives at the house, but neighbor Steve Schmoldt told CNN that his wife noticed law enforcement trucks last night in the neighborhood.

A recreational vehicle at the home seen via Street View on Google Maps appears to match the one law enforcement has asked the public for information on. Investigators believe the RV seen in the photos is the same one at the center of the explosion, the law enforcement source said, but they can't be certain because it was destroyed in the blast.

The blast occurred Friday at 6:30 a.m. CT, after a computerized voice emanating from a parked RV loudly urged people to evacuate, warning the vehicle would explode in minutes.

The RV's explosion left at least three people injured, set several other vehicles on fire, destroyed a number of buildings on the block and knocked out wireless service in much of the region.

Law enforcement officials provided little new information in a news conference Saturday about how the investigation was progressing, but FBI Special Agent in Charge Douglas Korneski said investigators were working the case on "several fronts."

That effort involves the FBI's behavioral analysis unit in Quantico, Virginia, along with approximately 250 FBI personnel working on the scene with law enforcement partners.

As the investigation continues, there are no signs of an active manhunt, an indication that investigators are not looking for someone who still poses a danger to the public, several law enforcement sources tell CNN.

"We can't confirm any individuals or anybody that we've identified," Korneski said, adding "at this point we are not prepared to identify any single individual."

Korneski also said investigators don't have any indication that they are looking for another subject. He added that there is no indication of other "explosive threats," and no other explosive devices were discovered during a sweep of the area.

Among the questions investigators are trying to answer is whether the AT&T transmission building that sustained damage in the blast was the target of the explosion, the sources say.

Asked Saturday about whether the AT&T building was a target, Korneski said, "We are looking at every possible motive."

Officials have said they are confident the explosion was "intentional." Still, the Christmas date, the early morning timing and the unusual warnings broadcast on loudspeaker before the explosion indicate that this was no attempt at mass murder.

"It was clearly done when nobody was going to be around," Nashville Mayor John Cooper said Friday.

No bystanders died from the blast. However, investigators found tissue that they believe could be human remains near the site of the explosion, Metro Nashville Police Department Chief John Drake said.

The blast tore into at least 41 businesses on Second Avenue in Nashville, a street full of historic buildings. Concerned about the structural integrity of the affected buildings, the city cordoned the area off and won't allow anyone in until Sunday afternoon.

"It will be some time before Second Avenue is back to normal," Cooper said.

Tennessee Gov. Bill Lee on Saturday announced he had requested a federal emergency declaration from President Donald Trump after touring the site that morning.

"The damage is shocking and it is a miracle that no residents were killed," the governor said.

Several local residents told CNN they woke to the sound of gunfire early Friday morning. Police said they were called to the location after a report of shots fired around 5:30 a.m.

Once on scene, police found a white RV parked in front of an AT&T transmission building at 166 Second Ave. North. The RV was repeatedly broadcasting a message warning of an explosion set to occur in 15 minutes, police said.

As the countdown grew closer to its end, the message from the RV changed, according to surveillance video taken from a building across the street.

The vehicle then exploded in a bright flash of light.

Three civilians were hospitalized and are in stable condition, officials said. The force of the explosion knocked down one officer, police spokesman Don Aaron said, and caused hearing loss in another. But no officers suffered serious injuries.

Officials have no information about whether anyone was inside the RV when it exploded. Police also tweeted a photo of the RV as it was driven into the area at 1:22 a.m. Friday.

As the investigation continues, officials will meticulously search the area for any trace of physical evidence, according to Andrew McCabe, a CNN law enforcement analyst and former FBI deputy director. Essential pieces of evidence, however, could be scattered across a large scene, given the size of the blast.

The most important question to answer at this time is who was behind the blast, McCabe said.

"We need to know who put this thing there and detonated it," he said. "It's only after you figure that out that you start to talk about things like motive or purpose."

Area locked down from public

Williams, the eyewitness, told CNN she was in her car with her family when the RV exploded into a fireball.

"Everything just, I mean, everything shook. It was quite the blast," she told CNN's Anderson Cooper.

Three cars were set afire. Trees were down. Bricks and glass were everywhere. Another resident said the scene of destruction was like an apocalyptic movie.

AT&T spokesman Jim Greer told CNN that the company's network hub in the city was damaged in the explosion and service in the Nashville area was affected. AT&T is the parent company of CNN.

On Saturday, the company said crews were working around the clock to restore the outages caused by the explosion. Teams on site had faced challenges, however, including having to evacuate the building due to a fire overnight.

AT&T announced Saturday afternoon that it had distributed more than six portable cell transmitters in Nashville to aid communications, including for responders and restoration teams, and with additional resources on the way. Power to facilities in the building is being restored through generators.

The street is on the edge of Nashville's hospitality and tourist district in a historic part of town.

Technical experts from the FBI lab and evidence response teams have been brought in from around the country to "help process this massive crime scene," said FBI Assistant Special Agent in Charge Matt Foster.

ATF Special Agent in Charge Mickey French said his agency had activated its national response teams and was working alongside the FBI and Nashville police. The agency has explosive specialists, chemists and engineers involved in the evidence recovery process.