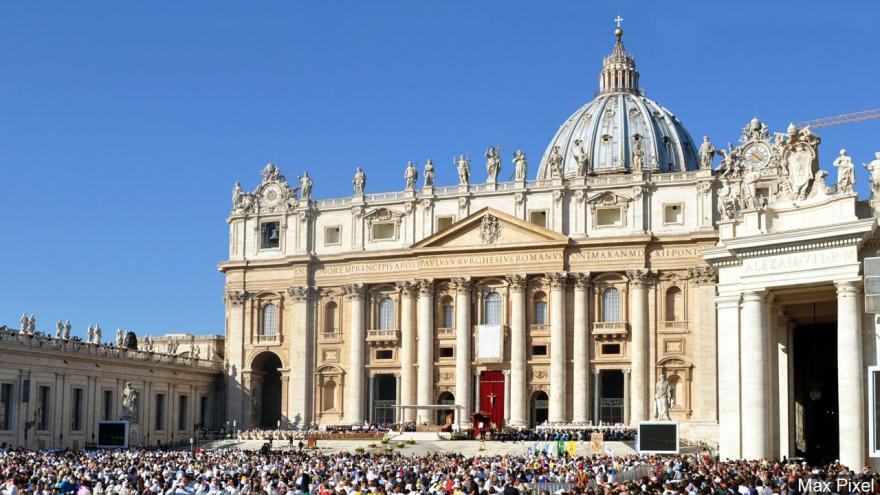 MINNEAPOLIS (AP) — Three brothers who were sexually abused by a priest from the Archdiocese of St. Paul and Minneapolis filed a federal lawsuit Tuesday against the Vatican, claiming the Holy See bears responsibility because the case was mishandled by former Archbishop John Nienstedt and the Vatican's former ambassador to the United States.

The lawsuit attempts to trace a direct line from clergy sex abuse victims to the Vatican, through Minnesota church officials. Luke, Stephen and Benedict Hoffman were abused by former priest Curtis Wehmeyer, roughly between 2009 and 2012.

Nienstedt and the former ambassador, Carlo Maria Viganò, have previously denied the allegations raised against them in the new lawsuit. The Vatican's U.S. lawyer, Jeffrey Lena, had no immediate comment. In the past Lena has described sex abuse lawsuits naming the Vatican as a defendant as publicity stunts.

Two other plaintiffs in the suit also say they were molested by Catholic priests, one in the St. Paul-Minneapolis archdiocese and another in the Los Angeles archdiocese. Those two men and the plaintiff's attorney in the case filed Tuesday, Jeff Anderson, have previously sued the Vatican without success.

Anderson told The Associated Press that he believes the new lawsuit has a better chance of succeeding because he's made a more complete effort to document Vatican authority over Catholic clerics and to portray the church as a commercial enterprise.

Because it has the status of a foreign nation, the Vatican is generally exempt from civil lawsuits filed in the United States. Exceptions to the U.S. Foreign Sovereign Immunities Act include wrongful acts committed against U.S. citizens and commercial activities undertaken by foreign nations.

"The body of evidence and the scope of the complaint is much broader and much more developed than the first time we litigated this," Anderson said.

The new lawsuit seeks monetary damages and asks for court orders requiring the Vatican to turn over names of "credibly accused" priests whose cases been referred to the Holy See, along with records related to those allegations.

Before the Hoffman brothers were abused, church officials received complaints about Wehmeyer's inappropriate sexual activities. In 2004, he was cited for loitering in a Minnesota park known as place to meet for anonymous sex, and he lied to police about his identity, the lawsuit says.

Wehmeyer was later evaluated at a treatment center for troubled priests and diagnosed with a sexual disorder. The archbishop at the time, Harry Flynn, moved him from West St. Paul to the Church of the Blessed Sacrament in St. Paul and assigned him to administrative duties.

But in 2009, about the time Wehmeyer started abusing the Hoffman brothers, Nienstedt promoted Wehmeyer to pastor. According to the lawsuit, another official of the archdiocese cautioned Nienstedt — then newly installed as archbishop — about the promotion and informed him of Wehmeyer's record, to no avail.

Over the next three years, Wehmeyer abused the Hoffman brothers during camping trips. The boys were in their mid-teens at the time. After the boys' mother reported the abuse of at least two of her sons to police, Wehmeyer was arrested and pleaded guilty to criminal sexual conduct and possession of child pornography.

The AP does not routinely name victims of sexual abuse, but the brothers have chosen to make their names public.

Wehmeyer's arrest led local prosecutors to file criminal charges against the archdiocese for failing to protect children. The charges were dropped in 2016 when the archdiocese admitted wrongdoing and agreed to meet with victims and adopt stronger measures to prevent clergy abuse.

Wehmeyer's arrest also triggered the forced resignation of Nienstedt after the archdiocese retained a law firm to look into his supervision of Wehmeyer. The investigation revealed allegations that Nienstedt also had sexually harassed other priests and seminarians and had a "social relationship" with Wehmeyer.

Controversy surrounding the relationship between Wehmeyer and Nienstedt escalated when a priest involved in the investigation wrote a memo saying that Viganò ordered church officials to end the inquiry and instructed them to destroy a letter they wrote to him objecting to his directive.

Although the lawsuit states Viganò's alleged actions as fact, the former Vatican ambassador flatly denied them in a statement last year. "I never told anyone that (the law firm) should stop the inquiry, and I never ordered any document be destroyed," he said. "Any statement to the contrary is false."

In an effort to circumvent the immunity from civil lawsuits normally given to foreign countries, the lawsuit argues that the church is a commercial enterprise, asserting that it provides services, including "pastoral guidance, education and counseling . . . in exchange for all or a portion of revenues collected from its members."

In previous litigation, Anderson argued that the Vatican can be liable for sex abuse because of its commercial activities in the U.S.

The lawsuit also lists a series of international scandals where investigators found that church officials covered up for abusive priests, including those in Ireland, Australia, Guam, and Chile, adding that internal church documents require church officials to keep allegations of child sexual abuse secret. It also makes a sweeping argument that the Vatican exercises "unqualified power" over priests, bishops and cardinals and religious orders.

To illustrate this alleged global control, the lawsuit cites a highly publicized incident in November, when the U.S. Conference of Catholic Bishops backed away from taking up measures to hold bishops accountable if they mishandle allegations of sexual abuse by clergy after the Vatican objected.

The Vatican has successfully contended that the world's 414,000 priests are not its employees because they aren't paid by Rome, don't act on Rome's behalf and aren't controlled day-to-day by the pope.