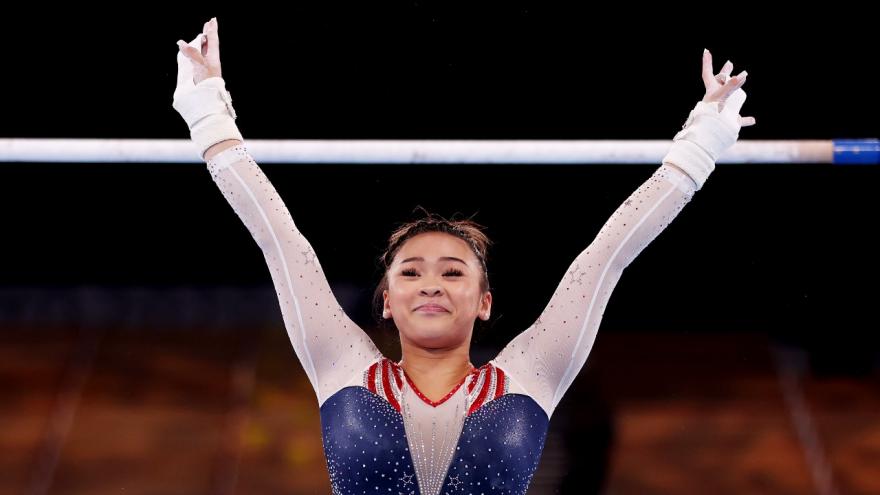 (CNN) -- USA's Sunisa Lee won the women's all-around gymnastics gold medal at the Tokyo Olympics on Thursday as Simone Biles cheered on from the stands at the Ariake Gymnastics Centre.

Lee scored 57.433 to finish ahead of Brazil's Rebeca Andrade in second and the Russian Olympic Committee's Angelina Melnikova in third, extending a run of five all-around Olympic golds for the USA.

The 18-year-old Lee took the lead from Andrade, who becomes the first woman from Brazil to win an Olympic gymnastics medal, after the third rotation, and completed her victory when she scored 13.700 with her floor routine.

Much of the build-up to the final had been dominated by Biles' withdrawal from the event to protect her mental health. Biles, a four-time Olympic gold medalist and all-around champion in Rio five years ago, had pulled out of the team competition earlier this week.

Alongside teammate and close friend Jordan Chiles, Biles was there to cheer and clap for Lee and USA's Jade Carey.

The gold medal adds to the silver Lee won with Team USA in the team competition on Tuesday, and her victory means the US draws level with the Soviet Union with a record six wins in the women's all-around.

Lee started the evening with a score of 14.600 on the vault before moving into the medal positions with 15.300 on the uneven bars.

Her 13.833 on the balance beam handed her the lead over Andrade, and the Brazilian then stepped out twice on her floor routine to end her hopes of a gold.

Lee, who qualified third behind Biles and Andrade ahead of Thursday's final, has overcome significant adversity over the past two years.

She won gold on uneven bars at the 2019 US Championships shortly after her father had fallen off a ladder and become paralyzed from the chest down, while last year she lost her aunt and uncle to Covid-19.

"Thinking about all the bad things that have happened to me," she told the New York Times last year, "has actually made me more positive about the Olympics."