Super Bowl LV: All you need to know about the commercials 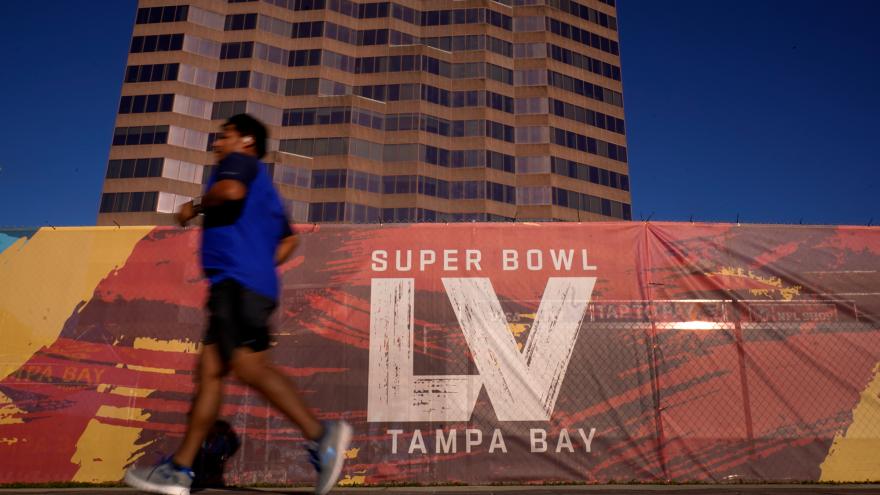 A man passes signage for Super Bowl 55 as he runs along the Hillsborough River on Wednesday, Feb. 3, 2021, in Tampa, Fla. - Charlie Riedel/AP

(CNN) -- It's that time of year again, when people actually look forward to watching TV commercials.

Millions of viewers will tune in to Super Bowl LV, which airs Sunday evening on CBS. Despite notable brands opting out of airing commercials during the game this year, the sports spectacle will see several newcomers looking to introduce themselves to a massive audience.

Last year's Super Bowl on Fox averaged 102 million viewers and was 2020's most-watched program. That means the game is still a valuable investment for some companies.

But substantial uncertainty exists about how huge the audience will be this year, as brands are worried the virus will prevent fans from throwing Super Bowl parties. The pandemic is also altering the messages brands want to relay to customers.

"Obviously brands need to speak to consumers in the right tone and are rightly worried about getting this wrong," Mark Read, CEO WPP, the world's largest advertising firm, previously told CNN Business. "But I have no doubt that the Super Bowl will remain the year's biggest sports and advertising event."

Here's what you should know.

Super Bowl commercials aren't cheap, even this year, despite the economic difficulties. CBS is reportedly charging $5.5 million for a 30-second spot. That's slightly less than last year, but for the first time advertisers will have to cough up an additional $300,000 to be on the network's online live stream.

CBS sold out all of its in-game slots by mid-January. That's notably slower than last year's pace, when Fox said it was sold out by Thanksgiving 2019.

For starters, Budweiser and its Clydesdales are sitting this one out. The beer company said it will invest the millions of dollars that would have been spent on an ad to support "critical Covid-19 vaccine awareness" with donations and future ad campaigns.

That doesn't mean its parent company, Anheuser-Busch, isn't spending big on the game. The company is running its first-ever commercial from famed film directed David Fincher. The ad is intended to "remind us of the role that beer can play in people's lives." Some of Budweiser's sister brands, including Bud Light and Michelob Ultra, will also air ads, totaling four minutes.

Two major automakers, Kia and Hyundai, are also on the bench this year. Kia said that after running Super Bowl ads for a decade, it's declining this year in order to "expand its charitable initiatives in support of America's youth." Hyundai, which has advertised during the game for several years, parked its usual plans for various reasons.

Planters attracted attention last year for killing Mr. Peanut. This year, its using the $5 million allocated for a Super Bowl ad and giving it to people who have done charitable acts during the pandemic. Avocados from Mexico is also sitting out after six consecutive years.

The absences don't mean the game will be filled with commercials for CBS series "NCIS," however. Several high-profile advertisers will remain in the game, including Amazon, Cheetos, and Doritos.

There are several first timers too, notably from companies that have grown during the pandemic. Chipotle is airing a spot focused on its sustainability efforts, including "reducing carbon emissions, saving water, and supporting local growers."

DoorDash has roped in big names for its ad, including rapper Daveed Diggs and "Sesame Street" stalwarts Big Bird, Cookie Monster and Grover. The minute-long spot shows the variety of foods users can have delivered.

Other celebrities starring in ads for newcomers including Amy Schumer for Hellman's mayonnaise, John Travolta and his daughter for Scotts Miracle-Gro and Dolly Parton in a spot for website maker Squarespace. Comedians Dana Carvey and Mike Myers of "Wayne's World" fame have been reunited for Uber Eats.

Robinhood, the stock trading app that sparked a revolution of sorts on Wall Street, has also bought an ad. Competitor E-Trade is back too after taking a few years off.