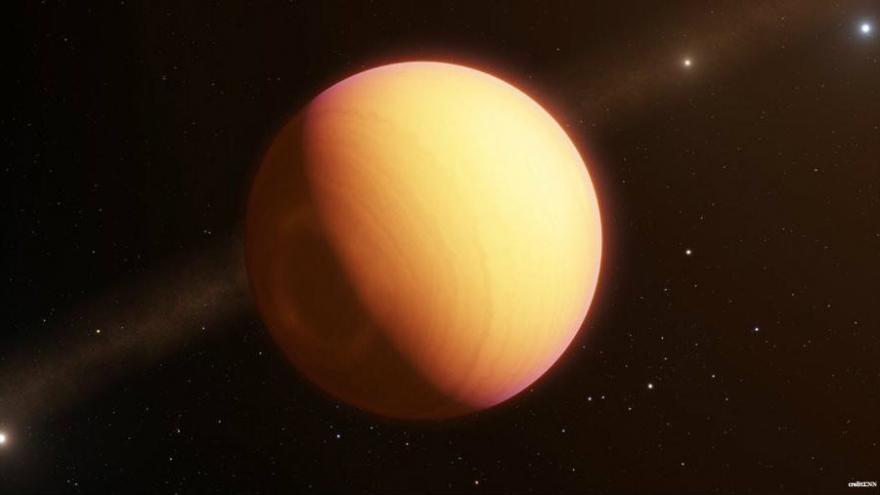 (CNN) -- For the first time, a super-telescope has revealed a complex atmosphere on an exoplanet, according to a new study. The observation revealed a planet-wide storm where clouds of iron and silicates stay in motion.

The exoplanet, dubbed HR 8799e, is part of a system 130 light-years from Earth in the Pegasus constellation. HR 8799e is only 30 million years old, which is considered a baby exoplanet in our universe. It's one of three planets around the star HR 8799 and the closest to its host star. The researchers believe that it takes between 40 and 50 years for the planet to make one orbit around its star.

The exoplanet wouldn't be a pleasant place to live, however, because the temperature hovers around 1,616 degrees Fahrenheit.

The "super-Jupiter" isn't like anything ever seen in our solar system; it's younger and more massive. All of the planets around the star are gas giants between five and 10 times the mass of Jupiter.

The study detailing the observation was published in the journal Astronomy and Astrophysics on Wednesday.

Researchers were able to observe the exoplanet using optical interferometry, in which the GRAVITY instrument used four telescopes at the European Southern Observatory's Very Large Telescope that were working in sync to mimic one super-telescope. Normally, exoplanets are dwarfed and drowned out by the light of their host stars, which makes them hard to detect.

The details gleaned from this observation were 10 times more precise and detailed than observations of the planet when it was discovered in 2010. Given how successful this technique was, researchers can apply it to other exoplanets in the future.

"Our analysis showed that HR 8799e has an atmosphere containing far more carbon monoxide than methane -- something not expected from equilibrium chemistry," said Sylvestre Lacour, team leader and researcher at the Max Planck Institute for Extraterrestrial Physics in Germany, in a statement. "We can best explain this surprising result with high vertical winds within the atmosphere preventing the carbon monoxide from reacting with hydrogen to form methane."

The excess of the carbon monoxide combines with the iron and silicate dust clouds in the atmosphere to suggest a huge, violent storm.

"Our observations suggest a ball of gas illuminated from the interior, with rays of warm light swirling through stormy patches of dark clouds," Lacour said. "Convection moves around the clouds of silicate and iron particles, which disaggregate and rain down into the interior. This paints a picture of a dynamic atmosphere of a giant exoplanet at birth, undergoing complex physical and chemical processes."

Because the planet is so young by universal standards, researchers can study it to learn more about the formation of planets and planetary systems.

The researchers are planning long-term follow-up observations of the planet using the GRAVITY instrument.