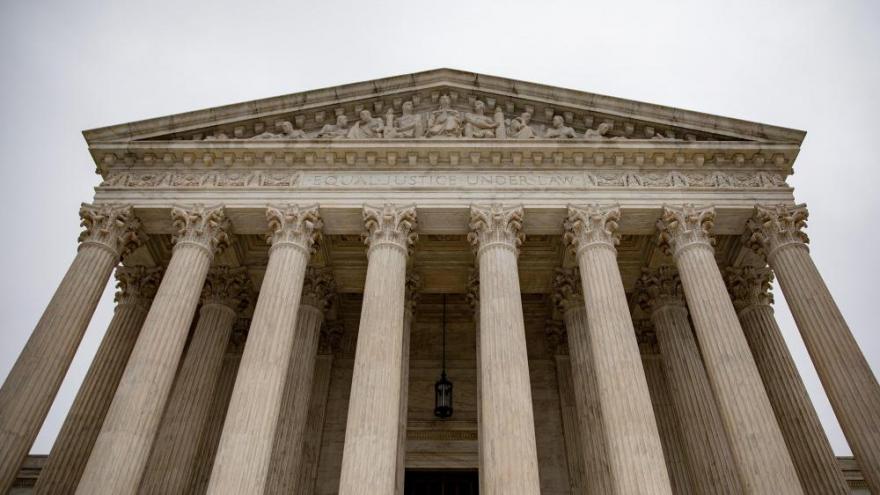 The Supreme Court announced April 26 it will consider the scope of the Second Amendment next term in a case concerning a New York law that restricts an individual from carrying a concealed handgun in public.

(CNN) -- The Supreme Court announced Monday it will consider the scope of the Second Amendment next term in a case concerning a New York law that restricts an individual from carrying a concealed handgun in public.

It has been more than a decade since the justices have ruled on a significant case concerning the right to bear arms, and the court's decision to take the case comes in the wake of several mass shootings in the US and the Biden administration's push for enhanced gun regulations.

The court's move also highlights the impact of Justice Amy Coney Barrett's presence on the newly solidified conservative court. Justice Clarence Thomas and others had been urging the justices to take up the issue, and just last term, the court declined several cases.

In 2008, the court held for the first time that the Second Amendment protects an individual's right to keep and bear arms at home for self-defense. Except for a follow up decision two years later, the justices have largely stayed away from the issue, infuriating gun rights advocates and even some of the justices themselves.

"If a lower court treated another right so cavalierly, I have little doubt that this Court would intervene," Thomas wrote in a 2018 case. "But as evidenced by our continued inaction in this area, the 2nd Amendment is a disfavored right in this Court."

After the court effectively dismissed one case last term, Justice Brett Kavanaugh wrote that he hoped that the justices would vote to take up a new case "soon." Still, in June, perhaps with the knowledge that there weren't five votes ready to decide, the court again declined to take up several new cases.

But the justices' decision on Monday could give the court an opportunity to revisit the 2008 majority opinion in District of Columbia v. Heller, which was penned by the late Justice Antonin Scalia, a conservative whose opinion has faced renewed scrutiny in recent weeks as the country grapples with a spate of deadly mass shootings.

In the 2008 ruling, Scalia, joined by four fellow conservatives, delved into the "originalist" understanding of the Framers in the 18th Century and concluded that the Second Amendment extended to private citizens -- a departure from how federal judges generally regarded the amendment as covering state militia, such as National Guards.

But Scalia's construction of history also led him to note some exceptions, for example, regarding concealed weapons. "(T)he majority of the 19th-century courts to consider the question held that prohibitions on carrying concealed weapons were lawful under the Second Amendment or state analogues," he wrote.

As the court reviews the case next term, there could be some federal action on the issue, with Democrats, including President Joe Biden, pushing Congress to enact tighter gun restrictions in an effort to prevent more shootings.

An 'actual and articulable' need to carry handguns

The new case, New York State Rifle & Pistol Association v. Corlett, concerns a New York law governing licenses to carry concealed handguns in public. It requires a resident to show he has what New York calls an "actual and articulable" need to do so.

"The Supreme Court's decision in the case could have an impact on the millions of people living in jurisdictions with restrictive public carry licensing regimes and will tell us how broadly the current set of justices are reading the Second Amendment," said Jacob D. Charles, the executive director of the Center for Firearms law at Duke University School of Law.

According to the Giffords Law Center, although most states continue to require a permit in order to carry a concealed weapon, many states now place few or no restrictions on open carry.

New York Attorney General Letitia James said in court papers that since the landmark Supreme Court cases Heller and the later McDonald v. City of Chicago, courts have held that the right to carry firearms in public is not unlimited and can be subject to regulatory measures consistent "with longstanding limitations on that right."

James told the court that the law requires applicants to carry the handgun in public without restriction to show an "actual and articulable -- rather than merely speculative or specious -- need for self-defense." Lower courts upheld the restriction.

The petitioners in the case are Robert Nash, Brandon Koch and the New York State Rifle and Pistol Association, a group organized to defend the right of New York residents to keep and bear arms. They are represented by Paul Clement, who served as solicitor general during the Bush administration.

In court papers, Clement urged the justices to step in, arguing that the "single most important unresolved Second Amendment question" is whether an individual has a right to bear arms for self-defense "where confrontations often occur: outside the home."

Clement argued that the law makes it almost impossible for an ordinary individual to obtain a license. "Good, even impeccable, moral character plus a simple desire to exercise a fundamental right is," Clement said, "not sufficient." "Nor is living or being employed in a high crime area," he said.

Nash, for instance, requested to carry a handgun for self-defense after a string of robberies in his neighborhood. But he was denied because he did not demonstrate a special need for self-defense. Koch wanted a similar license, and he was able to cite his experience of participating in safety training courses. He too was denied.