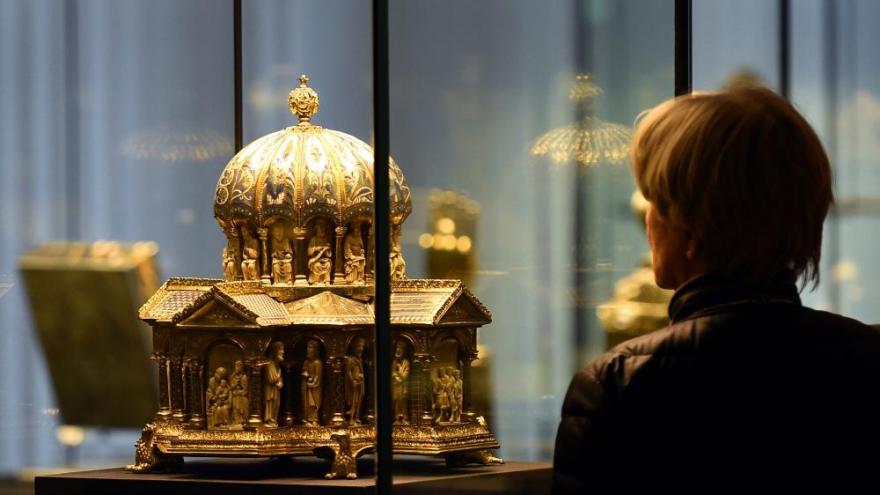 A visitor looks at the the cupola reliquary (Kuppelreliquar) of the so-called "Welfenschatz" (Guelph Treasure) displayed at the Kunstgewerbemuseum (Museum of Decorative Arts) in Berlin, on February 24, 2015.

(CNN) -- The Supreme Court on Wednesday wiped away lower court decisions that had gone in favor of Holocaust victims and family members who are seeking to bring suit in US courts against Hungary and Germany for property they say was stolen from them during World War II.

The court said lawyers for the victims had not reached the necessary bar to prove their claim falls under an exception to a federal law that generally provides immunity to foreign states from suit in US courts. The justices sent the cases back to the lower courts to allow victims to press other arguments in their favor.

In the case concerning Germany, Chief Justice John Roberts, writing for a unanimous court, said: "As a Nation, we would be surprised -- and might even initiate reciprocal action -- if a court in Germany adjudicated claims by Americans that they were entitled to hundreds of millions of dollars because of human rights violations committed by the United States Government years ago."

The first case involving Hungary was initially brought in 2010 by 14 Jewish survivors -- including four United States citizens -- who sued Hungary and its state run railway company in US courts seeking compensation for the property that was stolen from their families in 1941. They said their possessions and those of their families were taken from them as they boarded trains destined for concentration camps and they seek to represent a class of victims who have been injured in similar ways.

The plaintiffs said that while the Foreign Sovereign Immunities Act generally provides immunity to foreign states from suit in US courts, their case falls into an exception because the goods were stolen in violation of international law. But lawyers for Hungary said that such litigation would interfere with the foreign policy of the United States, and that US courts have long dismissed such claims so as to avoid "international discord."

"Adjudicating these claims would inevitably disrupt foreign relations and could expose the United States to similar treatment by other nations' judges," Gregory Silbert, a lawyer for Hungary, told the justices in court papers. He stressed that in 1947, Hungary and the Allied Powers entered into a peace treaty that covered property losses and that Hungary has made "substantial, additional payments to Holocaust victims and Jewish organizations." They said the "tens of billions of dollars" the plaintiffs might seek would "devastate Hungary's economy."

The US Department of Justice sided with Hungary's position. In briefs, acting Solicitor General Jeff Wall said the US "deplores the atrocities committed by the Nazi regime" and it has supported efforts to provide their victims with remedies for "egregious wrongs."

But in the case at hand, Wall said the US has "paramount interest" in ensuring that its foreign partners handle the dispute, arguing that litigation in US courts could "undermine that objective." He said that courts have long recognized that in appropriate cases, judges could voluntarily defer to another nation to resolve the dispute.

A district court dismissed the lawsuit -- and declined to get involved -- holding that the survivors should have first tried to file suit in Hungary. A federal appeals based in Washington, DC, reversed.

Judge Gregory Katsas, a Trump appointee, dissented from the decision. Katsas called the dispute a "foreign-cubed case -- involving wrongs committed by Hungarians against Hungarians in Hungary" that should be litigated in Hungary.

Sarah Harrington, a lawyer for the victims, says the plain language of the FSIA allows US courts to hear survivors' claims.

"Hungary committed in the 1947 peace treaty to fully compensate its victim and it has never done so," Harrington said in interview. "Congress said courts could hear these claims and even the United States has said there is a moral imperative to provide justice for Holocaust victims in their life time."

The second case, Germany v. Phillipp, took a closer look at the reach of the law as it applies to the heirs of several Jewish art dealers who did business in Germany in the 1930s. They seek to recover an art collection of medieval relics and devotional art dated from the 11th to the 15th century. In court papers, their heirs say they were forced to sell the art to the Nazi-controlled State of Prussia at a price much less than the art was worth. They lost a claim in Germany after an advisory commission concluded that the sale of the art "was not a compulsory sale due to persecution."

They then filed suit in US courts seeking the return of the art and -- or -- $250 million.

Nicholas M. O'Donnell, a lawyer for the victims, said that in 1935 the "Nazis -- led by Hermann Goering and for Hitler's personal benefit -- forced the sale of the collection at issue in this case" known as the Welfenschatz. "If such a coerced sale is not a taking in violation of international law, then nothing is," he said.

A panel of judges on the United States Court of Appeals for the District of Columbia Circuit held that under the FSIA, a suit could go forward.