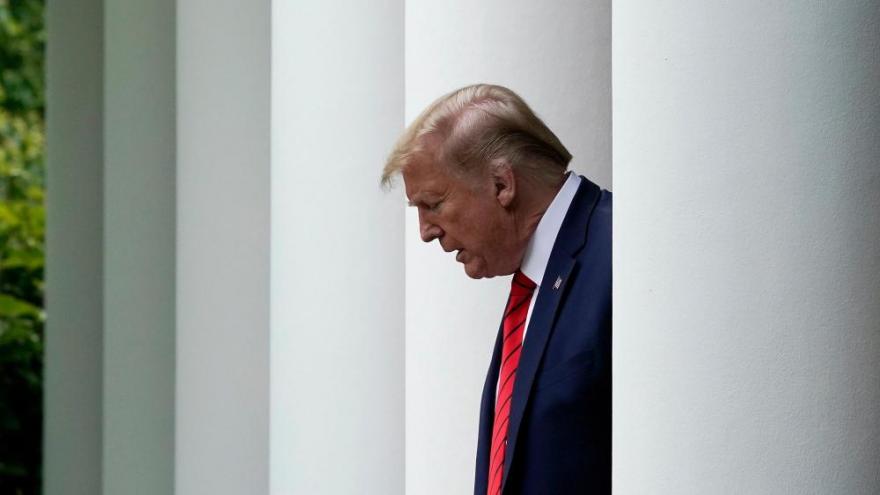 President Donald Trump arrives to speak at a press briefing about coronavirus testing in the Rose Garden of the White House on May 11, 2020 in Washington, DC. Several White House staff members and aides have recently tested positive for the coronavirus and three top health officials from the White House coronavirus task force are now self-quarantining after potential exposure.

(CNN) -- The Supreme Court is considering Tuesday whether the House of Representatives and a New York prosecutor can subpoena President Donald Trump's accounting firm and banks for his financial documents, two momentous disputes concerning separation of powers and Trump's broad claims of immunity.

Arguments in the cases, conducted over the telephone because of the coronavirus pandemic, come after Trump has sought for years to shield his tax returns and other records, while his critics launched a variety of investigations into hush money payments and potential violations of financial disclosure as well as ethics rules.

Now the justices, including two of Trump's nominees, will be drawn into some of the hottest political disputes of the day that also raise profound constitutional questions regarding Congress' ability to investigate and the scope of executive power. The justices will render their decision sometime by early summer, potentially inserting a bombshell into the center the presidential campaign.

The cases come in the middle of a blockbuster term where the justices are already deciding cases concerning DACA, LGBT rights and abortion. The court is also considering the Justice Department's emergency request concerning whether the House can have access to grand jury material from the Mueller probe and redacted portions of the Mueller report.

The cases were scheduled to be heard at the end of March but were delayed due to the pandemic. The arguments held over the phone have tended to take longer than those in person, although Chief Justice John Roberts has tried to keep questions and answers brief.

The first two cases, argued concurrently, pit the President's personal lawyers against House Democrats who say they need records from Trump's longtime accounting firm and two banks to investigate a variety of issues ranging from alleged hush money payments, illegal foreign involvement in a US campaign and potential violations of money laundering and ethics rules.

Trump's lawyers sued to block the subpoenas arguing that although they are directed to third parties -- Mazars USA, Deutsche Bank and Capital One -- they involve the President and members of his family and amount to an illegal fishing expedition. Democrats say they need the documents regardless of the fact the impeachment trial of the President earlier this year ended in acquittal.

Federal appeals courts have ruled against the President.

"This is hardly the first subpoena Congress has issued -- legislative subpoenas are older than our country itself," a panel of judges of the US Court of Appeals for the District of Columbia held in October 2019 in one dispute concerning documents held by Mazars USA, Trump's long-time accounting firm.

The 2nd US Circuit Court of Appeals in December said Deutsche Bank and Capital One had to turn over documents as well, saying that the issue did not trigger separation of powers concerns because the House's subpoenas were directed at third parties. The court said that the interests of Congress to pursue the investigations "overbalance" Trump's privacy interests.

Douglas N. Letter, a lawyer for the House of Representatives, argued in court papers that there is "nothing unprecedented" about congressional subpoenas for documents and that Supreme Court precedent has "long recognized" that Congress can investigate potential wrongdoing as long as it is related to a valid legislative purpose.

Letter pointed to the Financial Services Committee inquiry into the use of banks in the United States to carry out international money laundering and unsafe lending practices. The Intelligence Committee is looking at targeted risks posed by foreign interference in the US political process and sought records to investigate whether foreign actors had financial leverage over Trump. And he said the Oversight Committee was looking into presidential financial disclosures and conflicts of interest.

"Not only could legislation be had on these subjects, but the committees have introduced or reported out several bills related to their inquiries and have conducted significant oversight of the relevant agencies," Letter argued.

Patrick Strawbridge, Trump's personal lawyer, told the justices in filings that the subpoenas were part of an effort launched by House Speaker Nancy Pelosi after the Democrats took over the House to "investigate all aspects of the President's public and private life."

"To call these subpoenas unprecedented would be an understatement," Strawbridge argued, adding that it represented "the first time that Congress has subpoenaed private records of a sitting President."

"These subpoenas are all expansive, burdensome, and unfocused fishing expeditions," he said.

The Department of Justice is siding with Trump, arguing that the subpoenas represent a "serious risk of harassing the President and distracting him from his constitutional duties."

Principal Deputy Solicitor General Jeffrey Wall told the justices that when a legislative subpoena seeks information from the President, it must meet a higher standard. Both chambers of the House must authorize the subpoena in question and the information sought must be "demonstrably critical" to a "legitimate legislative purpose."

"Because the committees here did not make those showings, the subpoenas violate the Constitution," he argued.

The Justice Department suggested an off-ramp to the justices, saying they could avoid having to rule on Congress' investigatory powers with respect to the President, by simply invalidating the subpoenas on the threshold ground that they were not authorized by the full House. "A full House vote ensures adequate deliberation and is part of the system of checks and balances," Francisco said.

A brief filed by former senior Department of Justice officials argued that Congress' power is "not absolute" and that the President can invoke executive privilege should he desire. They also highlighted precedent. During President Bill Clinton's administration, the Senate heard testimony in a Whitewater-related inquiry from the Clinton family's personal accountant. In 1980, a Senate committee was investigating whether President Jimmy Carter played a role in his brother Billy Carter's contacts with business ventures in Libya. The committee investigated real estate holdings of the President and obtained Bill Carter's tax and banking records.

Immediately after the cases involving the House Democrats are complete, the court will turn to New York's attempt to obtain Trump's tax returns.

New York District Attorney Cyrus Vance served the subpoena on Trump's long-time accounting firm, Mazars USA, for his tax returns as part of an investigation into hush money payments to two women with whom the President allegedly had extra-marital affairs pursuant to testimony of Michael Cohen. (Trump has denied the affairs.)

Trump's personal lawyers and the Justice Department want the justices to reverse lower courts that have held that the subpoena could go forward.

"We have no occasion to decide today the precise contours and limitations of president immunity from prosecution," Judge Robert A. Katzmann wrote for the 2nd US Circuit Court of Appeals. "We conclude only that presidential immunity does not bar the enforcement of a state grand jury subpoena" directed at Trump's accounting firm.

Katzmann made sure to note however, that the "past six Presidents, dating back to President Carter, all voluntarily released their tax returns to the public." The Court relied upon prior cases including a 1974 case United States v. Nixon, where the Supreme Court upheld a subpoena directed to President Richard Nixon to produce certain tape recordings central to the Watergate investigation.

"The President has not persuasively explained why, if executive privilege did not preclude enforcement of the subpoena issued in Nixon, the Mazars subpoena must be enjoined despite seeking no privileged information and bearing no relation to the President's performance of his official functions," Katzmann wrote.

Trump attorney Jay Sekulow argued in legal briefs that Trump is entitled to "temporary presidential immunity" while in office in part because he has "unparalleled responsibilities to defend the nation, manage foreign and domestic affairs and execute federal law." He claimed "any and every" prosecutor should not be able to target the President, especially in relation to a state criminal process.

Sekulow warned that "floodgates will open" if states are able to proceed criminally against the President.

The Justice Department supports Trump here, but does not adopt his expansive views of presidential immunity. Instead, Solicitor General Noel Francisco focused on the fact that the district attorney can't harass the President and divert his time and energy. Francisco argued a prosecutor must show that the evidence is "directly relevant" to issues that are expected to be central at trial and that the prosecutor must identify "specific charging decisions that cannot responsibly be make without access to the materials."

Carey R. Dunne, general counsel for the New York County District Attorney's Office, argued that the Trump and Department of Justice arguments should fail because the president lacks any kind of categorical immunity especially when the subpoena targets a third party for documents not subject to executive privilege that have no relation to the president's official duties.

"This Court's precedents make clear that a President's Article II immunity extends only to official acts," Dunne told the justices.

Decisions in the cases should come down by early summer.