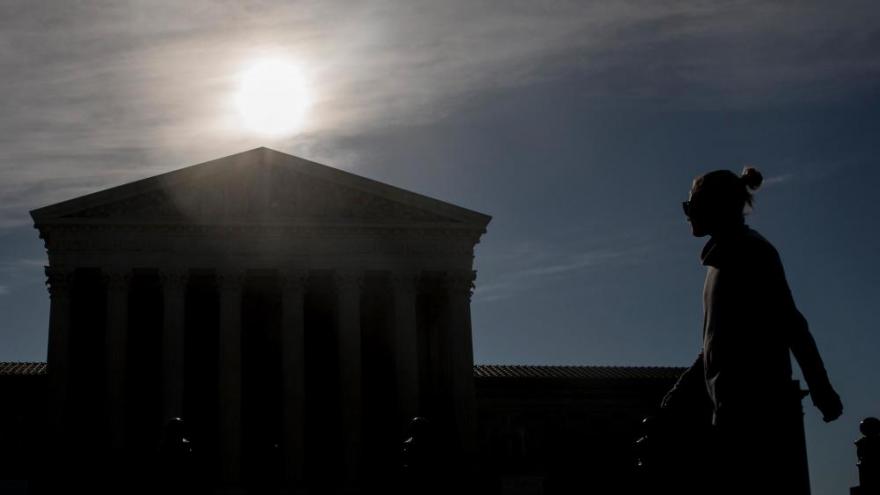 A woman walks past the Supreme Court where the justices will hold arguments by telephone for the first time ever, Monday, May 4, 2020, in Washington.

(CNN) -- The Supreme Court on Monday will tackle a dispute concerning two teachers who sought to file employment discrimination claims against the religious schools that fired them.

Seven years ago, the Supreme Court recognized a "ministerial exception" for the first time, holding that under the First Amendment the government could not interfere with a church's hiring decisions. The justices held that the teacher in that case could be considered a "minister" under the law, triggering the exception.

Now the justices will address the scope of that decision and whether it bars teachers -- who say they have limited religious duties -- from bringing suit.

Like those last week, the oral arguments will be held remotely by telephone with audio broadcast live to the public.

The case highlights the tension between advocates for religious freedom and church autonomy, and those who argue that employees should be protected by federal anti-discrimination laws and employers who might retaliate against employees for reporting misconduct.

Agnes Deirdre Morrissey-Berru, is seeking to sue Our Lady of Guadalupe School, for employment discrimination. She worked as a substitute teacher for the school in California, and later as a full-time fifth-grade and sixth-grade teacher. But during the 2014-2015 school year she was moved to a part-time position and the next year the school did not renew her contract.

The school said the decision was made because of her teaching performance, but Morrissey-Berru said the school discriminated against her based on her age.

Kristen Biel, who has since passed away, was employed at St. James School as a fifth-grade teacher from 2013-2014. At the end of the year she informed the principal that she had breast cancer and needed time off. A few weeks later she was told her teaching contract would not be renewed due to her "classroom management." She sought to sue her school under the Americans with Disabilities Act. Biel's husband is now representing her estate.

The issue for both cases is a 2012 ruling by a unanimous court held that a teacher at the Hosanna-Tabor Evangelical Lutheran Church and School in Michigan could not sue her employer for discrimination under federal law.

Cheryl Perich, who taught kindergarten, fourth grade and a religious class, became ill with what was eventually diagnosed with narcolepsy and went on disability leave. Later, she was notified that she was being replaced. She sought to sue under the Americans with Disabilities Act.

The court barred the lawsuit, however finding that Perich qualified as a "minister." The court noted that the school held Perich out as a commissioned minister, and that she had completed eight college-level courses in subjects including biblical interpretation, church doctrine, and the ministry of the Lutheran teacher. She was commissioned as a minister upon election by the congregation, which "recognized God's call to her to teach."

"Requiring a church to accept or retain an unwanted minister, or punishing a church for failing to do so," Chief Justice John Roberts wrote, deprives the church "of control over the election of those who will personify its beliefs."

"By imposing an unwanted minister, the state infringes the Free Exercise Clause, which protects a religious group's right to shape its own faith and mission through its appointments," Roberts said.

But Roberts said that he was "reluctant" to adopt a rigid formula for deciding when an employee qualifies as a minister. In broad terms the court identified factors that could identify when an employee was a "minister" under the law. Those included how the school viewed the employee, the employee's title, and whether the employee's duties included important religious functions. Now the court is expected to give more guidance.

In the case being heard Monday, lawyers for the teachers say that even though they worked for religious schools, they were not ministers, and the exception should not apply.

A federal appeals court ruled in favor of the teachers. The 9th US Circuit Court of Appeals said that Morrissey-Berru did have "significant religious responsibilities" as a teacher but that unlike Perich, she did not qualify as a "minister" for purposes of the ministerial exception because aside from taking a single course on the history of the Catholic Church, she did not have any religious credential or training.

In court papers, Morrissey-Berru's lawyer, Jeffrey L. Fisher, said that just because an employee performs important religious functions does not mean that that their employment triggers the ministerial exception.

Fisher noted that Biel's employment contract with the school never suggested that she would be considered a Catholic minister. Although she was Catholic and taught religion, "she did not lead her students in classroom prayer or teach them prayer rituals." She accompanied them to the multi-purpose room for mass, but a Catholic priest or a nun would conduct the Mass.

"Religious employers sincerely believe that virtually all of their employees perform important religious functions," Fisher argued. Instead, he told the justices they should look to a "multi-factor framework" that includes a job title, the training reflected in the title, and whether the employee had held himself or herself out as a minister.

"Conferring broad immunity on religious employers under the ministerial exception," Fisher argued, could "stifle a vital means of identifying and punishing grave wrongdoing."

But lawyers for the school countered that the Supreme Court made clear that the women would trigger the exception. "Both of the Catholic schoolteachers here exercised important religious functions," Eric Rassbach, an attorney at the Becket Fund for Religious Liberty argued in court papers.

"Parents trust Catholic schools to assist them in one of their most important duties: forming the faith of their children," said Montserrat Alvarado, executive director at the Becket Fund. "If courts can second-guess a Catholic school's judgment about who should teach religious beliefs to fifth graders, then neither Catholics nor any other religious group can be confident in their ability to convey the faith to the next generation."

The Trump administration is siding with the school. "Both respondents performed important religious functions for a religious employer," Solicitor General Noel Francisco told the court.

A decision in the case is expected by this summer.